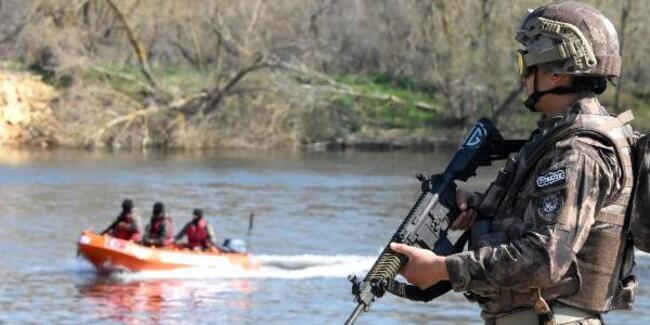 Fires shot at special forces boat from Greek side

GreekNewsOnDemand.com comments: The following article is from the systemic, Erdogin-loving news site hurriyetdailynews.com and can’t help but show it’s allegiance to the “sultan” by publish utter GARBAGE and LIES about Greece. Ugh…EXCUSE ME, but the whole thing about Greece-Turkish tension goes back to…1453 whereupon the Ottoman Turks INVADED, RANSACKED and CONQUERED the Greek, byzantine empire! The Greeks were then enslaved for…400 years and ever since then are STILL HARASSED by the Turks TO THIS DAY!

As for the modern, recent events in the Greek Evros region, the Turks HARASS, FIRE ON and even…TAKE CAPTIVE GREEK SOLDIERS in this region. The Turks also send this MIT intelligence agents to this region to INVADE GREEK TERRITORY and SPY ON THE GREEKS (see here)!!! There is only ON VIOLATOR HERE and this THE TURK–END OF STORY!! WHAT, THOUGH, WILL THE WORLD COMMUNITY DO ABOUT THIS???

So anything you read in the following article just know that the…EXACT OPPOSITE IT TRUE!! As for the Greeks firing on the Turks…BRAVO!!!…GOOD JOB GREEKS!!!…DEFEND YOUR MOTHERLAND FROM THE HISTORICALLY RUTHLESS, MURDEROUS TURKS!!!….

A Turkish special forces boat that was patrolling the Evros (Meriç) River came under fire shot from the Greek side of the shared border, the governor’s office of the northwestern province of Edirne has said.

The special force police were patrolling the Turkish side of the river and found a corpse of a migrant stuck in the roots of trees.

As they started taking pictures of the individual, shots were fired from the Greek side.

“A group of 10 to 12 people in military camouflage outfit opened harassment fire on the special forces boat. Our personnel responded by firing warning shots into the air and the harassment fire ended,” said the statement.

Tensions at the border have occasionally flared up.

“It was also communicated to the Greek side that the construction of the fence should not be commenced without technical coordination between the two countries,” the Turkish Foreign Ministry said in a statement.

Turkey will not allow Greece to unilaterally redraw the border in a fait accompli, but bilateral technical talks as proposed by Turkey could solve the issue, said Foreign Ministry spokesman Hami Aksoy.