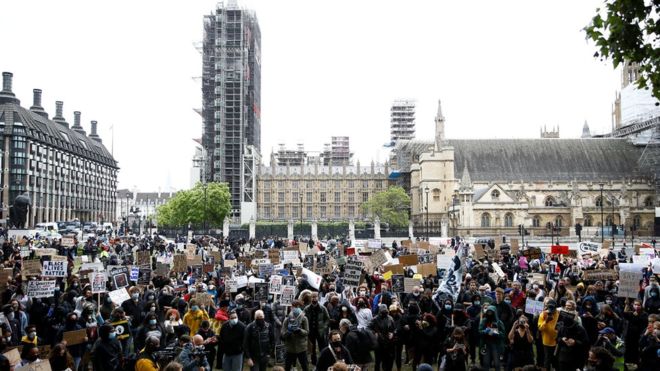 REUTERS – Thousands of protesters have gathered in Parliament Square

BBC: George Floyd: Crowds gather to protest across the UK

GreekNewsOnDemand.com comments: WOW…even the Britons are protests for this DECEIVER who FAKED his death in co-operation with the American deep state, DHS, local police in Minneapolis, etc., in order for this to be used as a pretext to create further racial tensions in America and around the world! This is the best modern-day “divide and conquer” tactic of the Illuminati.

For more on this HOAX, read also the below articles…

George Floyd’s death predicted on the… SIMPSONS. The Sheeple are ALIVE AND WELL….

Crowds have gathered across the UK as protests over the death of George Floyd get under way.

Protesters have ignored official advice to avoid mass gatherings amid the coronavirus pandemic, with Home Secretary Priti Patel telling people it was “for the safety of all of us”.

Demonstrators have congregated in London’s Parliament Square and gatherings are planned across the UK.

Greater Manchester Mayor Andy Burnham has warned that mass gatherings were “high risk” amid fears that coronavirus may be spreading again.

Protests began in the US after a video emerged of Mr Floyd, 46, being arrested on 25 May in Minneapolis.

Footage showed him gasping that he could not breathe during the arrest by four officers. They have since been charged over the death, which sparked days of protest in the US and Black Lives Matter demonstrations across the world.

Thousands of people have gathered in Parliament Square with some heading towards the Home Office, despite the warnings to stay at home.

The majority are wearing face coverings and many are wearing gloves, while some of the protest signs have made reference to the virus, including one which read: “There is a virus greater than Covid-19 and it’s called racism”.

During a minute’s silence protesters went down on one knee while holding their fists in the air before chanting Mr Floyd’s name.

Ms Patel said she understood people’s views and why they wanted to protest but said that “we must put public health first”.

“Of course I completely understand people’s to desire to express their views and have the right to protest but the fact of the matter is we are in a health pandemic across the UK, coronavirus is a deadly virus and I would say to those who want to protest, please don’t,” she said.

The home secretary also urged organisers to speak to the police about ways to make the demonstrations safer.

Speaking on LBC, Dame Cressida said she understood the strength of feeling but urged protesters to find a way of expressing themselves which did not involve mass gatherings.

She said: “Now I appreciate that we have a very, very long history of people expressing themselves by assembling and waving placards and being in central London, and all those things are very dear to our history.

“But coming together in a gathering is not only unlawful but also perhaps more importantly, in a sense, it is putting yourself and your family at unnecessary risk and other people around you, as we all know it is a deadly virus and it can get spread in crowds.”

She also said that police officers should not “take the knee” in solidarity with protesters.

In Manchester about 15,000 protesters have gathered at Piccadilly Gardens in the city centre.

Police in Northern Ireland are conducting checks on roads and at transport hubs ahead of planned protests and said anyone travelling to take part can expect to be stopped and advised to return home or face a fine.

On Friday night, organisers of Black Lives Matter demonstrations in Belfast and Londonderry indicated they planned to proceed with social distancing measures in place.

However, planned protests in Newry, Portadown and Omagh have been cancelled.

One doctor warned on Saturday the UK was “balanced on a knife edge” and those attending protests should take steps to protect themselves from the virus.

Sarah Jarvis told BBC Breakfast that, while people feel strongly about the reasons behind the protests, those attending should continue to stay distant from one another.

“Coronavirus is no respecter of the good cause for which you are going out,” she said.

“If you are protesting, please be sensible. I know you feel strongly about it, but please socially distance, but actually if you can’t socially distance even outside please wear a face covering.”