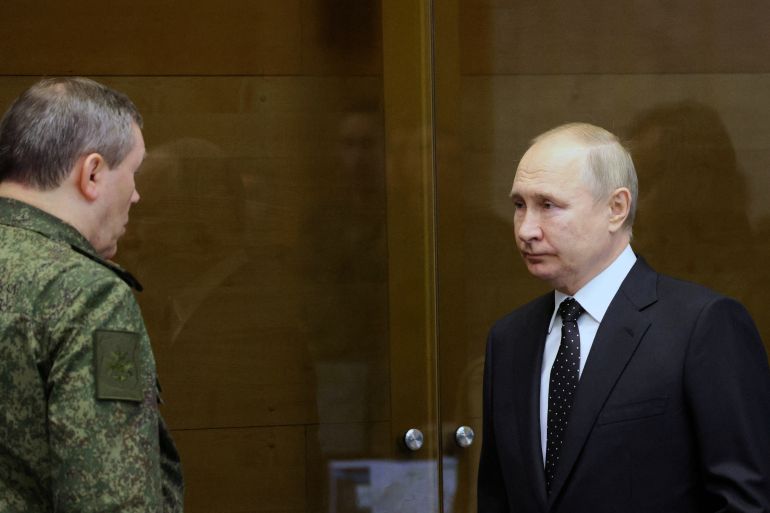 Russian President Vladimir Putin has ordered the strengthening of Russia’s borders and instructed security services to keep greater control of society and root out “traitors, spies and saboteurs”, the country’s news agencies have reported.

Speaking on Security Services Day, widely celebrated in Russia, Putin on Monday instructed his security officials to protect the borders, increase control of society, and maximise their “use of the operational, technical and personnel potential” to prevent risks coming from abroad and internal traitors.

“It is necessary to severely suppress the actions of foreign special services, quickly identify traitors, spies and saboteurs,” TASS said.

Russia’s borders must also be strengthened, he said.

“Work must be intensified through the border services and the Federal Security Service [FSB],” Russia’s state-owned RIA news agency cited Putin as saying on Monday.

“And it [the border] must be reliably covered. Any attempts to violate it must be thwarted quickly and effectively using whatever forces and means we have at our disposal, including mobile action units and special forces,” he said.

Putin also said that it is the task of special security services to ensure the safety of people living in regions in Ukraine that Moscow claimed in September had been incorporated into Russia. Kyiv and its Western allies have branded the moves as illegal annexations.

“It is your duty to do everything necessary to ensure their security to the maximum, respect for their rights and freedoms,” Putin said, promising them more “modern equipment and weapons”.

Putin’s comments come as Russian missile attacks on Ukraine have intensified and there is no end in sight to Russia’s war on Ukraine, now in its 10th month.

Speaking to the leaders of several NATO countries via video link on Monday, Ukraine’s President Volodymyr Zelenskyy continued to urge Ukraine’s allies to supply its military with more weapons.

“Russian aggression can and must fail. And our task now is to accelerate it,” he told the NATO leaders assembled in Riga, Latvia.

Zelenskyy said in a late-night address on Sunday that some nine million of Ukraine’s estimated 40 million people had their electricity restored after Russia’s missile barrage last week focused on electricity and water infrastructure.

Also on Monday, Russian Foreign Minister Sergei Lavrov accused Zelenskyy of a “lack of understanding of the seriousness of the moment and lack of concern for his people”.

Lavrov also made a sharp verbal attack on the West and what he described as the “hysterical reaction” to the situation in Ukraine in an interview with the Belarus 1 TV channel in Minsk.

Moscow’s invasion of Ukraine had destroyed the “geopolitical games of the West”, which had wanted to turn Ukraine into a permanent threat to Russia, TASS quoted the Russian foreign minister as saying.

UN Secretary-General Antonio Guterres, in a year-end news conference on Monday, said with regret that he expected the war in Ukraine “will go on”.

“I am not optimistic about the possibility of effective peace talks in the immediate future,” Guterres said.