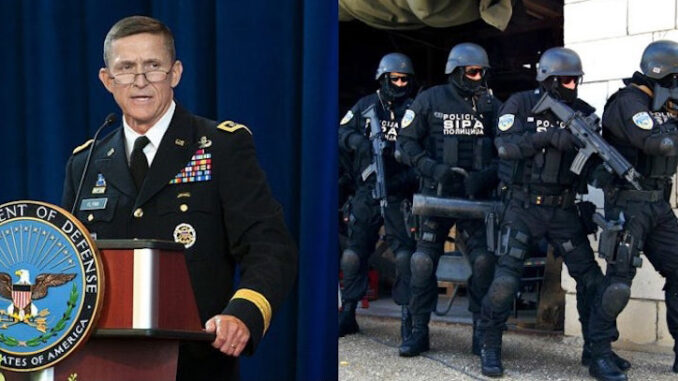 According to the Generals, the Special Forces are currently battling it out with CIA deep state operatives to preserve our constitution and ensure Biden doesn’t steal the election from Trump.

In the interview embedded below, General Flynn and McInerney discuss Trump’s “clear path to victory,” reveal what the “Kraken” really is, and thoroughly expose the Democratic plot to cheat their way into the White House.

More information about the CIA unit in Germany, courtesy of Dw.com:

WikiLeaks released a trove of CIA documents on Tuesday that it claimed revealed details of its secret hacking arsenal.

The leaks purportedly revealed that a top secret CIA unit used the German city of Frankfurt am Main as the starting point for numerous hacking attacks on Europe, China and the Middle East.

WikiLeaks reported that the group developed trojans and other malicious software in the American Consulate General Office, the largest US consulate in the world. The programs focused on targets in Europe, the Middle East and Africa.

The documents revealed that CIA experts worked in the building under cover and included advice for life in Germany.

“Do not leave anything electronic or sensitive unattended in your room,” it told employees, also advising them to enjoy Lufthansa’s free alcohol “in moderation.”

The Frankfurt hackers, part of the Center for Cyber Intelligence Europe, were said to be given diplomatic passports and a State Department identity. It instructed employees how to safely enter Germany. A WikiLeaks tweet published an section of the Frankfurt information.

The consulate was the focus of a German investigation into US intelligence capabilities following the 2013 revelation that NSA agents had tapped Chancellor Angela Merkel’s phone.

German daily “Süddeutsche Zeitung” reported the building was known to be home to a vast network of intelligence personnel including CIA agents, NSA spies, military secret service personnel, Department of Homeland Security employees and Secret Service employees. It reported the Americans had also established a dense network of outposts and shell companies in Frankfurt.

Bob Ayers, a retired US intelligence official currently working as a security analyst told AP the release was “real bad” for the agency.

Jonathan Liu, a spokesman for the CIA, told AP: “We do not comment on the authenticity or content of purported intelligence documents.”

According to WikiLeaks the documents revealed that the CIA could remotely activate certain Samsung smart televisions equipped with cameras and microphones to turn them into bugs.

WikiLeaks also claimed that if the CIA had hacked a cell phone, it could then bypass encryption methods used by popular chat programs such as Whatsapp, Telegram, Signal and Confide. This prompted some concern at first online that all such messaging “Apps” were no longer effectively encrypted – but the exploit only applied to people whose phones are already compromised. According to the leaks, the CIA has undocumented exploits on popular smartphone models.

Snowden said the documents appeared to be genuine.

The documents also revealed that the CIA had the ability to conduct false flag attacks using malware stolen from other nations.

According to WikiLeaks the trove showed that the CIA had lost control of its arsenal of hacking tools.

WikiLeaks said it was given the files by an anonymous source who wanted to shed public light on the hacking programs.

The collection of documents vastly outnumbered the trove on the NSA released by Snowden.