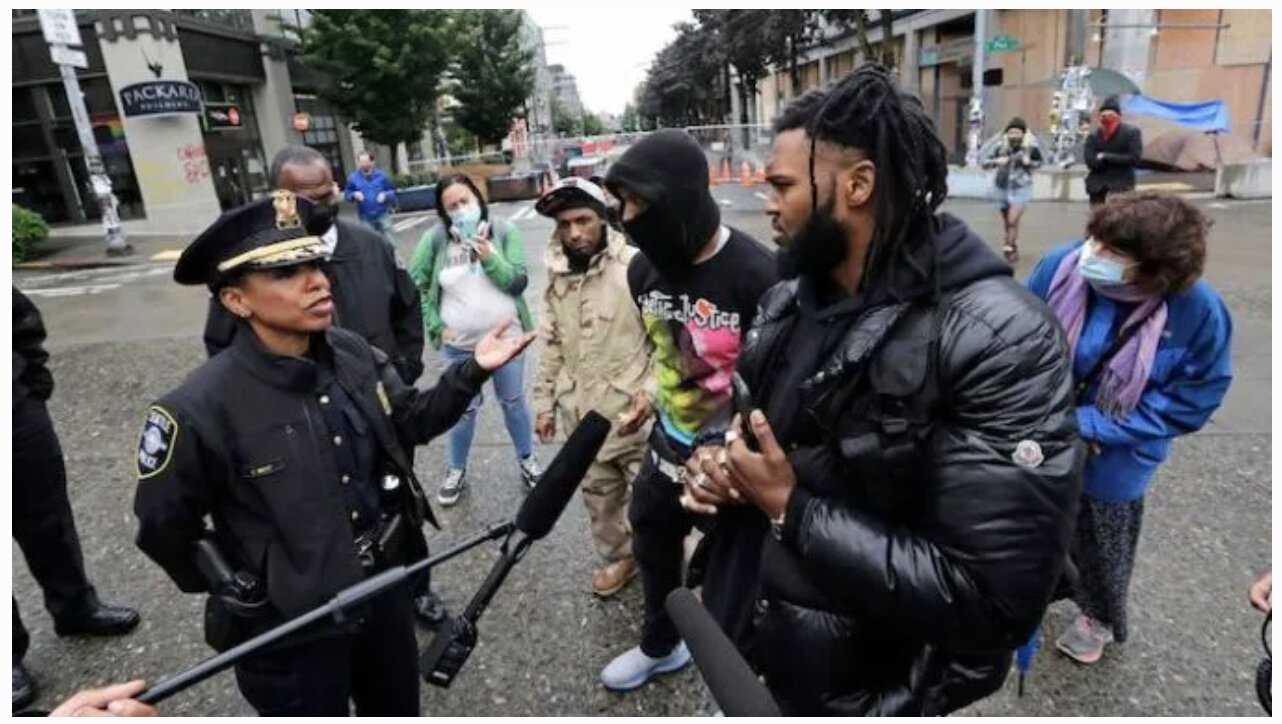 The “warlord” of Seattle’s Capitol Hill Autonomous Zone, Raz, has announced that he has established diplomatic ties with the Seattle Mayor’s office and Fire Department in the form of daily meetings.

The news comes one day after President Trump demanded Gov. Jay Inslee and the Mayor of Seattle immediately regain control of a six city block zone and police station in the city that have been seized by armed leftist anarchists and protesters.

The Capitol Hill Autonomous Zone (CHAZ) was set up a few days ago with the aim of creating a communist utopia in the heart of Seattle. However, it has been taken over by Raz Simone, who has been dubbed the “Black George Zimmerman,” and is acting like a warlord, extorting businesses for protection money.

A recent community meeting was live-streamed, where people in the CHAZ could raise questions of Raz and other leaders.

NationalFile report: One resident at the meeting, although supportive of the “fantastic experiment” and “great opportunity” that is the Seattle CHAZ, he still had some “initial concerns” about the project:

I don’t want to step on the greater message that is the vital importance at hand, but as the people that live in this area that is now being called the autonomous zone, there’s some real day-to-day nuts and bolts things that we need answered as well. There’s deliveries for the businesses, some businesses can’t fit delivery trucks in, so we do need… But yeah, those are just real concerns, and when you try to ask these questions, there’s nobody there to help us, so it’s about opening that dialogue, and that’s what the whole idea is, because it’s all very new still.

Responding to him, Warlord Raz thanked the man “for [his] voice,” and declared that he is actually in contact with the local authorities who have accepted he is now running things:

You have my number, email and that is one of our biggest concerns. I’ve been having meetings with the Fire Department… and even the Mayor’s assistant every morning at like 5AM, something like that, 7AM, something like that. They’re all calling my number and then trying to bring as many people out here as possible, usually there’s like 12 or 8 people, and then we can have a conversation about what we can do and how we can help.

Raz said that the collective does not want to be “a nuisance to anyone,” although they think that everyone has the right to be. “We understand that you’re here and we want to respect you as well,” Raz continued. “I like to be a respectful person, just period. So communicate with us, it doesn’t have to be an issue, and we’re trying to find solutions at this point.”

Baxter Dmitry is a writer at Your News Wire. He covers politics, business and entertainment. Speaking truth to power since he learned to talk, Baxter has travelled in over 80 countries and won arguments in every single one. Live without fear.
Email: [email protected]
Follow: @baxter_dmitry
https://newspunch.com/seattle-autonomous-zone-leader-claims-total-control-says-speaks-with-mayors-office-daily/
Share 0 FacebookTwitterPinterestLinkedinEmail
previous post