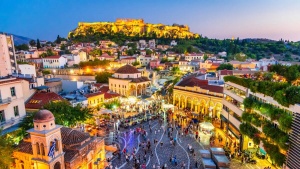 According to Minister Kikilias, this is a result of the increase in arrivals from important markets with which strategic agreements were made this year, including +69.2 per cent from Great Britain, +10.6 per cent from Germany, and + six per cent from France, compared to October 2019, SchengenVisaInfo.com reports.

“These performances in the month of October prove de facto that the lengthening of the tourist season has become a reality, and they mean multiple revenues not only for the branded islands, but also for the less popular mainland destinations, Athens and Thessaloniki,” he pointed out in this regard.

In addition, he also emphasised that the surplus of three billion euros, which will be allocated this year, will be distributed to vulnerable groups, families, and people in need, adding that Greece has proven how much it tries to support society. During the pandemic, the country allocated €44 billion in different forms to its citizens,  €10 billion of which was for energy.

At the end of last month, the Minister of Tourism revealed that by the end of 2022, Greece’s income from travel would exceed the 2021 budget by three billion euros.

Meanwhile, he noted that in October, Fraport’s airports recorded an increase of +14.9 per cent compared to October 2019. As a result, there was also an increase in the turnover in accommodation and hotels, respectively by 22.1 per cent and 19.8 per cent in the third quarter of this year.

As Kikilias explains, even the occupancy rate in the travel destination accommodations has experienced very high growth, thus reaching 100 per cent.

Moreover, the Minister of Tourism said that €100 million would be allocated from the program titled “Save-Operate” in order to support the owners of small hotels and accommodations in mountain destinations that are most affected by the energy crisis. He also confirmed that the contribution to “Tourism for all” will continue until the end of January 2023.

Noting that Greece is considered one of the main tourist brands around the world, the Greek authorities have announced that this year the income from tourism has already exceeded €18 billion.