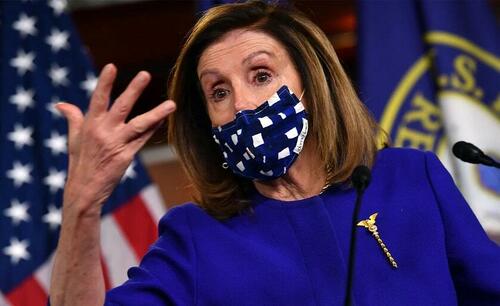 House Speaker Nancy Pelosi’s office was directly involved in the Capitol security plan – in which officials said they had been “denied again and again” when asking for resources  necessary to protect the building complex during the the Jan. 6, 2021 riot.

Did Pelosi’s office set Capitol Police up to fail?

According to a trove of text and email messages made public Wednesday by House Republicans, the Capitol was left vulnerable on Jan. 6 as a result of failures by Democratic leadership in the House as well as law enforcement officials in the Capitol Police, who let concerns over the “optics” of armed officers and National Guardsmen take precedent over an appropriate level of staffing given the obvious protests which were about to occur.

“Leadership and law enforcement failures within the U.S. Capitol left the complex vulnerable on January 6, 2021. The Democrat-led investigation in the House of Representatives, however, has disregarded those institutional failings that exposed the Capitol to violence that day,” concludes the GOP report, which also highlighted that Capitol Police began receiving specific warnings in December over potentially significant violence planned against the Capitol and lawmakers by angry protesters who planned to contest the certification of the 2020 election results.

“Prior to that day, the U.S. Capitol Police (USCP) had obtained sufficient information from an array of channels to anticipate and prepare for the violence that occurred,” reads the report. “On January 6, 2021, criminal rioters assaulted police officers, broke into the U.S. Capitol, damaged property, and temporarily interfered with the certification of states’ presidential and vice presidential electors at the Joint Session of Congress—a typically pro forma event.”

But its most explosive revelations involved text and email messages showing that two key staffers in Pelosi’s office attended regular meetings to discuss the security plan for Jan. 6 dating back to early December 2020 and that Pelosi’s top aide even edited some of the plans. Most of those discussions and meetings excluded Republican lawmakers in the House, the report noted.

“Then-House Sergeant at Arms Paul Irving—who served on the Capitol Police Board by virtue of his position—succumbed to political pressures from the Office of Speaker Pelosi and House Democrat leadership leading up to January 6, 2021,” the report said. “He coordinated closely with the Speaker and her staff and left Republicans out of important discussions related to security.” -Just the News

“Our report exposes the partisanship, incompetence and indifference that led to the disaster on January 6 and the leading role Speaker Pelosi and her office played in the security failure at the Capitol,” said Rep. Jim Banks. “Unlike  the sham January 6th Committee, House Republicans produced a useful report that will keep Capitol and USCP officers safe with no subpoena power and no budget.”

Following the events of Jan. 6, Pelosi forced House Sergeant at Arms Irving to resign, after which a staffer in Irving’s old office sent a blistering email suggesting that Democratic leadership had thrown Irving and Capitol Police Chief Steve Sund under the bus to cover up their own failures to provide adequate security.

“For the Speaker’s knee-jerk reaction to yesterday’s unprecedented event (and God knows how Congress lives for its knee-jerk reactions and to hell with future consequences . . . ). to immediately call for your resignation . . . after you have been denied again and again by Appropriations for proper security outfitting of the Capitol (and I WROTE several of those testimonies, dangit) . . . and to blame you personally because our department was doing the best they could with what they had and our comparatively small department size and limited officer resources . . . and because other agencies stepped in to assist just a fraction too late . . . again, for Congress to demand your resignation is spectacularly unjust, unfair, and unwarranted,” wrote the staffer.

“This is not your fault. Or Sund’s fault. If anything, Appropriations should be hung out to dry.”