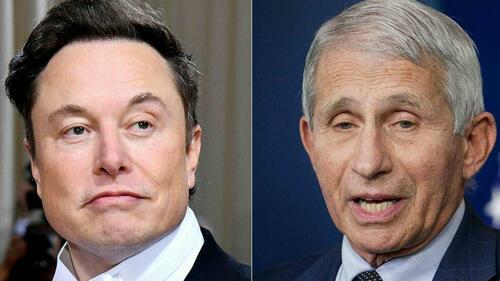 The White House says recent comments made by Elon Musk about Anthony Fauci are “dangerous” and “disgusting.”

“They are disgusting, and they are divorced from reality, and we will continue to call that out and be very clear about that,” said White House Press Secretary Karine Jean-Pierre in a Monday presser, before praising Fauci’s public handling of the Covid-19 pandemic.

Jean-Pierre is asked about @elonmusk calling for Fauci to be prosecuted:

"These personal attacks that we have been seeing are incredibly dangerous. They are disgusting and they are divorced from reality… We should be thankful to him." pic.twitter.com/lAadqXpPgQ

Over the weekend, Musk tweeted: “My pronouns are Prosecute/Fauci,” eliciting widespread shrieks from the collective, including from astronaut Scott Kelly, who said “Elon, please don’t mock and promote hate toward already marginalized and at-risk-of-violence members of the #LGBTQ+ community.”

“Furthermore, Dr Fauci is a dedicated public servant whose sole motivation was saving lives,” he added.

“Forcing your pronouns upon others when they didn’t ask, and implicitly ostracizing those who don’t, is neither good nor kind to anyone,” he added.

“As for Fauci, he lied to Congress and funded gain-of-function research that killed millions of people. Not awesome imo.”

.@elonmusk Elon, please don’t mock and promote hate toward already marginalized and at-risk-of-violence members of the #LGBTQ+ community. They are real people with real feelings. Furthermore, Dr Fauci is a dedicated public servant whose sole motivation was saving lives. https://t.co/Vgu04XMGeZ

Fauci indeed funded gain-of-function research – offshoring it to Wuhan, China after the Obama administration banned it in 2014.

What’s more, House Republicans think he may have been involved in a cover-up.

“We write to request a transcribed interview of Dr. Anthony Fauci, Director, U.S. National Institute of Allergy and Infectious Diseases (NIAID). Excerpts of emails we are making public today (see enclosed Appendix I) reveal that Dr. Fauci was warned of two things: (1) the potential that COVID-19 leaked from the Wuhan Institute Virology (WIV) and (2) the possibility that the virus was intentionally genetically manipulated. It is imperative we investigate if this information was conveyed to the rest of the government and whether this information would have changed the U.S. response to the pandemic,” reads a January, 2022 letter from Reps. James Comer and Jim Jordan to HHS Secretary Xavier Becerra.

MUST-SEE INTERVIEW: We Have Been Lied To About Every Part of the...