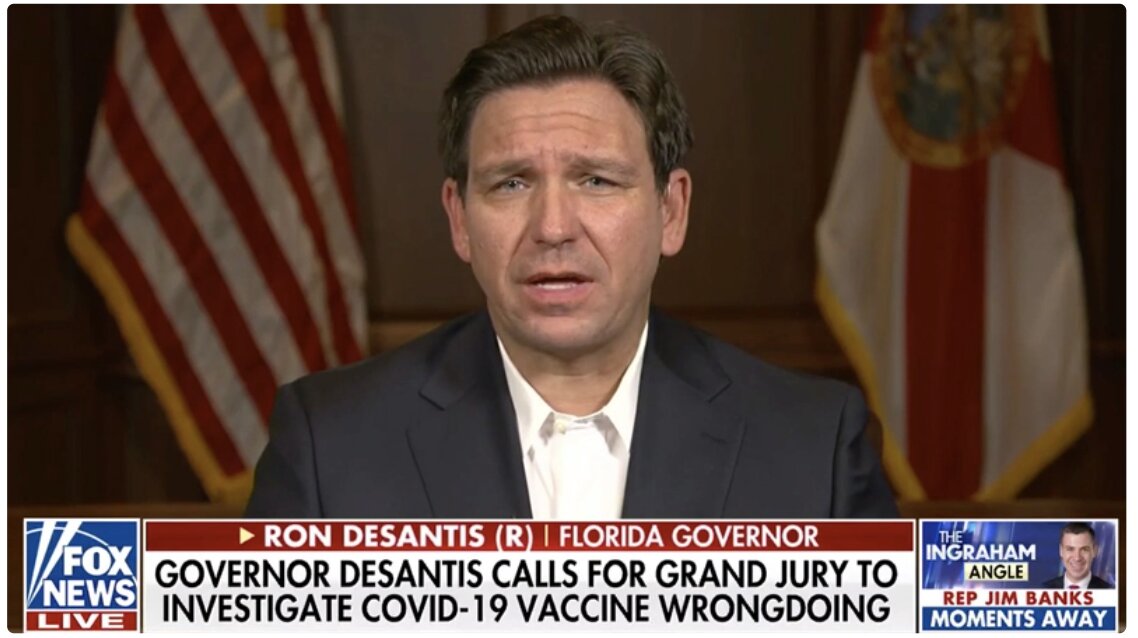 “The authoritarians wanted to institute a vaccine passport system, almost like a social credit system. So that people who dissented from this would be marginalized from society entirely,” says Florida governor.

Florida Governor Ron DeSantis (R) elaborated on his call for a grand jury to investigate “wrongdoing” regarding the COVID-19 vaccines.

DeSantis appeared on Fox News’ “The Ingraham Angle” Tuesday to explain how Florida would be seeking accountability from vaccine manufacturers and government officials pushing the experimental shots.

“You take an mRNA shot and the way to view it is OK, what are the benefits? And what are the drawbacks? And it seems like our medical establishment never wanted to be honest with people about the potential drawbacks,” DeSantis told host Laura Ingraham.

“And so, you showed a clip from Dr. Ladapo down here in Florida. And the analysis that he’s done with people, particularly young men who’ve taken the mRNA shots.”

The Florida governor went on to explain how other countries are already beginning to pull the COVID shot from the market amid emerging data showing the “drawbacks outweigh the benefits.”

“Look, at the end of the day, what we’re looking for is to provide truth, to provide accurate data and provide accurate analysis. And we had a great researcher from Denmark. Laura, Denmark does not allow people under 50, unless they have pre-existing conditions, to get the mRNA shots, because they’ve analyzed it, and said that the drawbacks outweigh the benefits,” he said.

“But they’ve also looked at all-cause mortality. And the researcher found that yes, in some age groups, there was a decline in COVID mortality after taking these, but there was then an increase in other types of mortality.”

“So, why have we not seen big declines in excess mortality since these things have been introduced?” he continued. “And so, we have now a panel that we’ve created in Florida, that is effectively going to function the way a CDC should function, and basically do evidence-based medicine, take study seriously that counteract the narrative and be willing to ask questions and go where the data leads.”

DeSantis also highlighted how Florida led the charge against vaccine mandate calls by the federal government and globalist groups.

“The authoritarians were the ones that wanted to mandate the vax on people, I protected people from having that happen and made sure Floridians could make their own choice,” he said.

“The authoritarians wanted to institute a vaccine passport system, almost like a social credit system. So that people who dissented from this would be marginalized from society entirely. We rejected that. And we banned it.”

“So, we were from the very beginning, helping people make their own decisions, but not using either the coercive power of the state or allowing big corporations to condition those choices,” he added.

DeSantis held a roundtable Tuesday featuring a wide array of medical experts to offer their testimony about the risks of the COVID shots, the coordinated censorship efforts by social media and government to silence dissent against the COVID narrative, and the harmful effects of the lockdowns and masks during the pandemic.

Left-wing radicals are attempting to destroy Alex Jones via the court system! Please help Alex by making a donation to his legal defense at Saveinfowars.com to keep him in the fight! Don’t let the NWO be successful with their latest weapon against Free Speech!