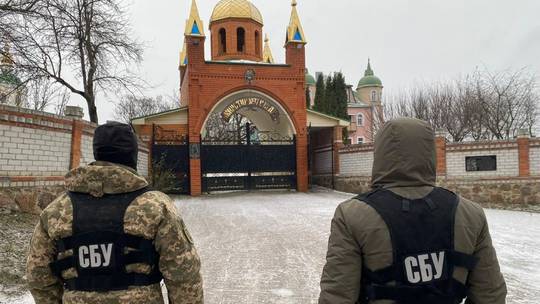 Ukraine’s domestic security agency, the SBU, conducted multiple raids targeting Orthodox Christian sites on Wednesday. The operation, spanning three regions of the country, is part of a crackdown on the Ukrainian Orthodox Church (UOC) over its alleged pro-Russia activities. The UOC is the largest religious grouping in Ukraine.

Searches have been conducted at some 13 religious sites, including monasteries, cathedrals, and libraries, the SBU said in a statement. The raids were necessary to “prevent the use of religious communities as centers of the ‘Russian world’ and to protect the population from provocations and terrorist acts,” the service claimed, adding that all the activities were carried out in line with the law.

The SBU did not elaborate on whether any incriminating evidence was recovered during the raids, or any arrests were made.

In recent weeks, the SBU has repeatedly targeted UOC sites, including the Kiev Pechersk Lavra, the country’s largest Orthodox Christian monastery. The campaign against the church has been backed by President Vladimir Zelensky, who announced new measures last week seeking to ban religious institutions deemed to have links with Russia.

The UOC has repeatedly rejected allegations of engaging in pro-Russia activities, accusing the authorities of trying to “intimidate” the faithful. Earlier this year, it declared independence and autocephaly from the Moscow Patriarchate following the outbreak of the conflict between Russia and Ukraine.

Ukraine has long been in the grip of religious tensions, with multiple unrecognized and semi-recognized entities claiming to be the true Ukrainian Orthodox Church and consistently challenging the authority of the Moscow Patriarchate. The so-called Orthodox Church of Ukraine (OCU) is the largest among the schismatic entities and has been active in its rivalry with the UOC, laying claim to the religious sites it controls.

The breakaway church was established back in 2018 with the support of the government, and then-President Pyotr Poroshenko in particular. The OCU managed to secure a decree from the Constantinople Patriarchy, which recognized it as a legitimate independent entity. The move was rejected by the Moscow Patriarchate, causing a major split in the Orthodox world.