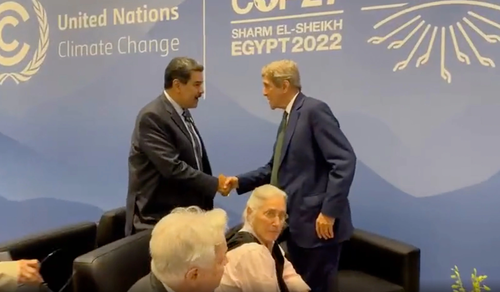 Update(1355ET): On Saturday the White House unveiled a monumental shift in its Venezuela policy, given only a short time ago Washington didn’t even officially recognize Nicolás Maduro as the socialist Latin American country’s legitimate ruler, announcing the easing of oil sanctions which allows Chevron to pump Venezuelan crude and export it to the United States.

Chevron was forced to halt all drilling there just under three years ago due to Trump administration sanctions, also amid a US policy that recognized opposition leader Juan Guaidó as “interim president”.

Bloomberg confirms following the fresh White House statement, “Chevron received a six-month license that authorizes the company to produce petroleum or petroleum products in Venezuela, according to a general license from the US Treasury Department. The San Ramon, California-based driller is also allowed to resume exports of crude oil that had been been halted since 2019, when the US ratcheted up sanctions against the OPEC producer.”

The Week in Numbers: FTX fallout, Elon’s new toy
It was in April 2020 that Chevron was ordered by then President Trump to “wind down” its oil fields in Venezuela, which also meant withdrawing or decommissioning its extensive machinery and infrastructure there.

For this reason Chevron’s CEO Mike Wirth recently estimated it would take “months and years in order to begin to maintain and refurbish fields and equipment and change any investment activity.” For this reason many are seeing the White House’s conditional six month license as a completely unrealistic timetable and constraint.

Chevron as the last major US oil company to operate there had before the oil embargo invested in Venezuela’s oil fields and machinery over the last century to the tune of an estimated $2.6 billion.

As Dave DeCamp of AntiWar.com previewed earlier, the US might soon grant Chevron a license to pump oil in Venezuela in a move that would ease crippling sanctions that were imposed on the South American country by the Trump administration.

According to The Wall Street Journal, the easing of sanctions is contingent on the implementation of a $3 billion humanitarian project that is expected to be announced by President Nicolas Maduro and his opposition this weekend. The project would be paid for with Venezuelan funds that have been seized by the US.

The license Chevron would be granted would still be limited as it would allow the oil company to regain partial control of its oil production in Venezuela, but it won’t be able to build new facilities until debts are repaid.

The Trump administration began imposing harsh sanctions on Venezuela in 2017 and really ramped them up in 2019 when the US recognized opposition figure Juan Guaido as “interim president” and backed a failed coup attempt against Maduro.

The US continued to increase sanctions on Venezuela following the failed coup and the country is essentially under an economic embargo.

The Journal report said that the license for Chevron would put the company under a framework of sanctions similar to the ones that went into effect in 2019.

US sanctions on Venezuela have had a devastating impact on the civilian population, but the Biden administration’s steps to ease sanctions are likely an effort to keep global oil prices down.

The move comes as the US and its allies are planning to implement a price cap on Russian oil that could backfire and cause Russia to significantly cut production.