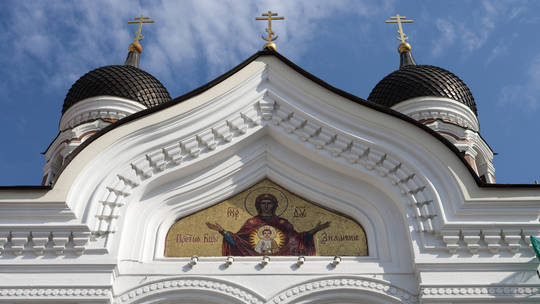 The MPs behind the bill suggest it poses a national security risk to the country
FILE PHOTO: Exterior of Russian Orthodox Cathedral of Alexander Nevsky. ©  Getty Images / Holger Leue

Ukraine’s parliament, the Verkhovnaya Rada, has registered a bill that seeks to completely outlaw the activities of the Russian Orthodox Church (ROC) on the territory of Ukraine, as lawmakers insist the church poses a threat to Ukraine’s national security and order.

The bill was initiated by former president Pyotr Poroshenko’s European Solidarity party, whose co-chairman, Irina Gerashschenko, announced the move on Facebook on Tuesday. She suggested that the ROC was “not a church, but an ideological organization promoting the ‘Russian world’.” She also accused the Moscow Patriarchate of using the Kiev Pechersk Lavra monastery – Ukraine’s main Orthodox Christian monastery – as an “anti-Ukrainian Kremlin cell.”

The proposed legislation seeks to outlaw the activities of all religious organizations and institutions that are part of or recognize subordination to the ROC “in canonical, organizational, and other matters.”

“The liberation of Ukraine from the Russian Orthodox Church is another step towards a free and independent Ukraine,” the co-chair concluded.

Russian officials have already slammed the bill, with Senator Olga Kovitidi stating it signals “the beginning of the end” for Ukraine and would be a fatal mistake for President Vladimir Zelensky if passed.

As the bill was being submitted to the Rada, Ukraine’s domestic security agency, the SBU, launched a raid targeting the Kiev Pechersk Lavra monastery, claiming Russian saboteurs and weapons could be housed there. The SBU reported on Wednesday that it had found “pro-Russian literature,” millions in cash and “suspicious Russian citizens” during its raid. Over 50 people reportedly underwent “in-depth counterintelligence interviews,” including with the use of a polygraph.

The Moscow Patriarchate has condemned the raid, saying it was yet another attempt to “intimidate” the Orthodox faithful. Kremlin spokesperson Dmitry Peskov has also stated that Ukraine has “long been at war with the ROC,” and that the SBU raid was “another link in the chain of military actions against Russian Orthodoxy.”

Ukraine has long experienced religious tensions, with multiple unrecognized and semi-recognized entities claiming to be the true Ukrainian Orthodox Church and challenging the authority of the Moscow Patriarchate. The two main factions are the Ukrainian Orthodox Church (UOC), which declared independence from Moscow earlier this year, citing Russia’s military operation in the country, and the Orthodox Church of Ukraine (OCU), which was established in 2018 with the help of then-president Pyotr Poroshenko and is considered by the ROC to be schismatic.