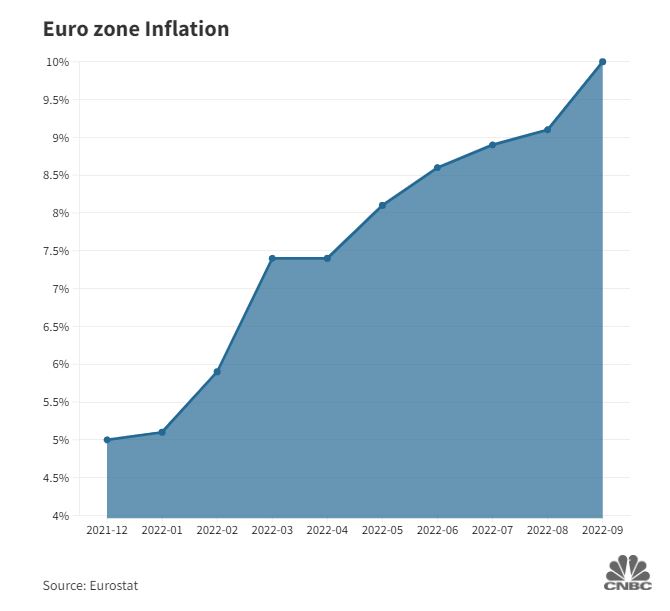 By Jim Hoft
Published October 1, 2022 at 7:30am
CNBC ImageInflation in the US under Joe Biden reached its highest level in 40 years. In response Joe Biden and Democrats decided to spend several trillion more.

In Europe, the situation is worse. The globalist elites in the EU are destroying their economies in their quest to teach Vladimir Putin a lesson.

Inflation hit a new record high in September of 10%, up from 9.1% in August. That is nearly a one full percentage point. Obviously, it will not be coming down any time soon.

This may spell doom for working Europeans. And it’s going to be a very cold winter this year in Europe.

Eurozone inflation hit a new record high of 10% in September, Eurostat data showed on Friday, up from 9.1% in August and above consensus projections of 9.7%.

The reading also showed price increases broadening out from volatile food and energy prices into nearly all segments of the 19-member bloc’s economy.

However, core inflation, which excludes food and energy, climbed 4.8% on the year, up from 4.3% in August, and economists broadly expect the situation to get worse before it gets better.

Friday’s print will exert more pressure on the European Central Bank to hike interest rates aggressively at its October meeting, and increases the likelihood of a longer and deeper recession across the euro zone.