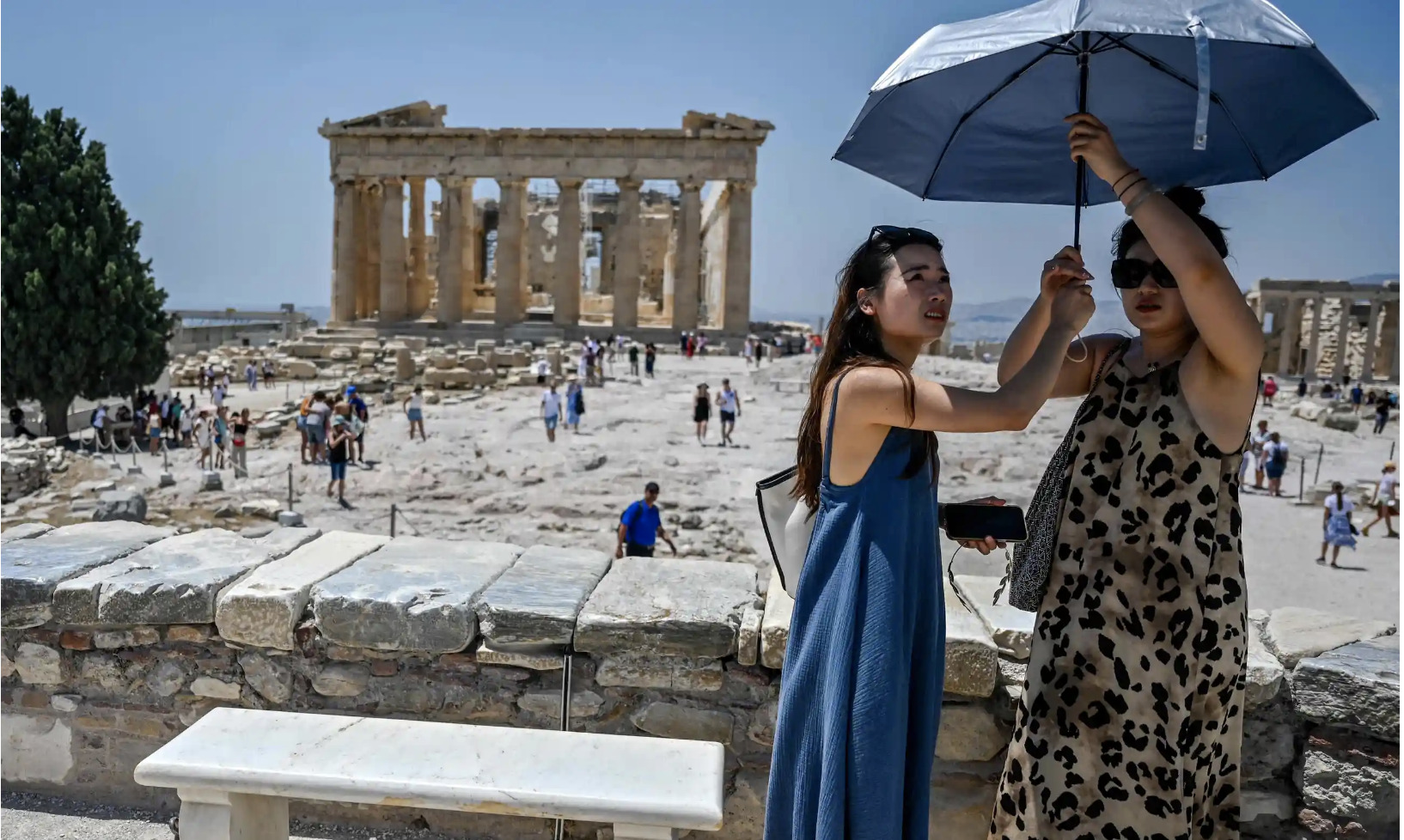 The sun shines on tourists visiting the Acropolis in Athens but a cloud hangs over Greek politics. Photograph: Louisa Gouliamaki/AFP/Getty Images

For much of last week thunderstorms and torrential rain swept Athens, marking a dramatic end to a summer otherwise electrified by talk of spyware, cyber-mercenaries, espionage and eavesdropping.

As the sun re-emerged on Friday, it was to a highly charged mood as Greece’s prematurely reconvened parliament debated a phone-tapping scandal whose exposure of practices last associated with military rule has shocked the nation and been met with stunned disbelief at the heart of the EU.

“When I found out, I did not hesitate to say it was wrong,” the embattled prime minister, Kyriakos Mitsotakis, told MPs as he sought to explain how his political opponent Nikos Androulakis, who heads the social democratic Pasok party, had been wiretapped by EYP – the national intelligence service – which is under his control.

“But any initiative to remedy the slip-up should not undermine EYP’s important work,” he said.

Amid calls for Mitsotakis’s resignation and a parliamentary inquiry set to start on Monday, the unusually heated debate has opened a Pandora’s box with potentially dramatic reverberations for the centre-right government before general elections next year.

“You gave the order for [EYP] to follow him,” Alexis Tsipras, the leftist former prime minister and chief of the main opposition party Syriza, railed as he denounced the country’s leader for his apparently criminal actions.

“You wanted to have absolute control over developments in the third [biggest] party so as to ensure control over political developments ahead of a new parliamentary law of proportional representation which requires governments of coalition.”

Like the weather, Greece’s political future is beginning to look increasingly dark.

Since assuming power after the nation’s prolonged financial crisis, Mitsotakis, 54, had been regarded as a safe pair of hands, a conservative liberal considered a rare success story by the European right.

His pro-business policies and modernising zeal went down well in western capitals relieved that the debt-burdened country, once viewed as an EU basket case, was again attracting capital and investment.

In Brussels, officials applauded the results-oriented policies of a politician not only perceived as a voice of reason in Europe – decrying Russia’s invasion of Ukraine despite Athens’s traditionally strong ties with Moscow – but a man who seemed to relish rising to the challenge of multiple crises.

In Mitsotakis, the EU had a partner who had won plaudits for his handling of the pandemic and was willing to talk tough on migration while coolly handling an increasingly unpredictable counterpart in Turkey.

But after three years of appearing unimpeachable, the US-educated former financier is in trouble.

The opposition has wasted no time in likening the spy scandal to Watergate. As the revelations spiral, Mitsotakis stands accused of administering a state apparatus whose tactics are more reminiscent of the cold war than a flourishing modern democracy.

Scrutiny of his style of government – concentrated around a small coterie of loyal advisers and aides, with ministers kept at arm’s length – has increasingly led to charges of arrogance.

In a controversial move, made within weeks of assuming office in July 2019, Mitsotakis took control of EYP, which had previously been under the oversight of the interior ministry. [GreekNewsOnDemand.com: Note: EYP actually belonged to the Ministry of Civil Protection.]

Last month, it emerged that Androulakis’s mobile phone had been tracked not only by EYP over a three-month period in the run-up to his election as Pasok leader, but targeted with Predator spyware, which has the ability to read encrypted messages and turn a phone into a listening device if the victim clicks on a link.

EYP’s monitoring began about the same time the Predator spyware attempt failed after Androulakis, who is also an MEP, ignored the clickbait.

On Friday, Mitsotakis rejected any suggestion his government had invested in the notorious spyware, echoing repeated denials by officials.

The malware was discovered when Androulakis sent his phone to the European parliament’s cybersecurity unit to be checked earlier this year. The Pasok leader, who is now demanding answers, alluded to the serendipitous nature of the timing of the two eavesdropping efforts.

“The government repeatedly claims that the Greek authorities do not use Predator,” he said last week. “But is the simultaneous [surveillance by] EYP and Predator, within a few days, a pure coincidence?”

The politician is not the only victim.In April, the Toronto-based Citizen Lab found evidence of Predator being used to hack the phone of Thanasis Koukakis, a journalist well known for investigating the Greek banking and business world. Like Androulakis, Koukakis is taking legal action.

Mitsotakis has not been slow in apportioning blame. In two shock resignations this month the leader dispensed with his chief of staff, Grigoris Dimitriadis, and the nation’s spy chief, Panagiotis Kontoleon, who had previously headed a private security company and been a personal choice to oversee EYP.

Dimitriadis, who is also Mitsotakis’s nephew, had been Kontoleon’s pointman and the main recipient of intelligence reports in the prime ministerial office.

But the Greek leader has stopped short of explaining what had caused Androulakis to be monitored in the first place. In parliament he provoked outrage, saying while the eavesdropping was legal and had been approved by a high-ranking public prosecutor, the law prevented him from revealing why it had occurred.

Pasok officials have spoken darkly of blackmail, bribery and extortion being the real motives. Androulakis, who would have been a likely contender in a future coalition government – a scenario now ruled out after the disclosures – is believed not to have been the preferred choice within the governing New Democracy party for the post.

“It infuriates us that there has been no answer as to why he was followed,” said Thanasis Glavinas, director of Pasok’s parliamentary office. “They claim it was for national security reasons, so what are they? Is he a spy? Is he a threat? We need to know. It is outrageous that these shadows of doubt should be cast over a man who, when elections come, will be a candidate for prime minister.”