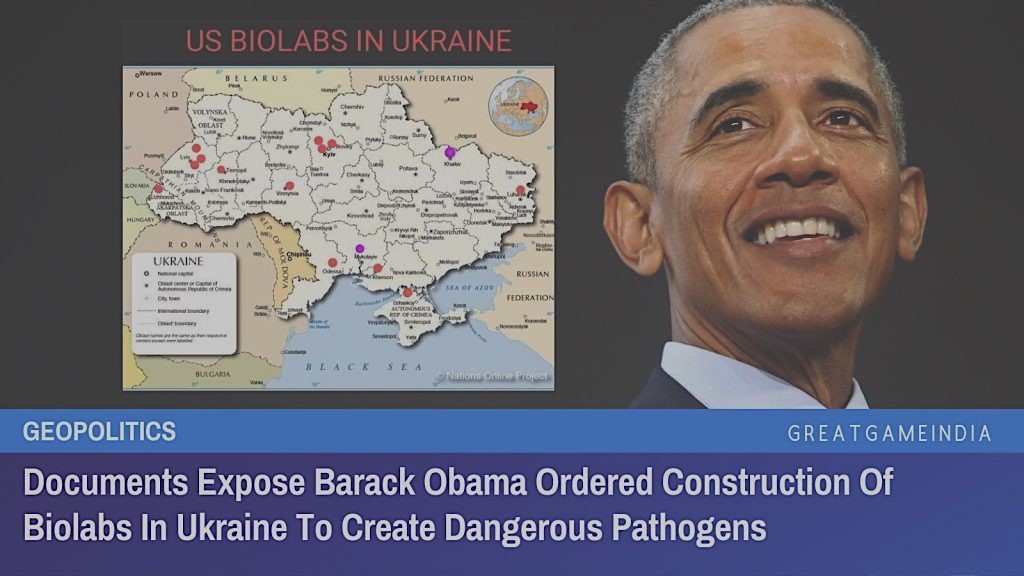 Sensitive biolabs documents deleted by US Embassy and published by GreatGameIndia expose that it was former US President Barack Obama himself who authorized the construction of biolabs in Ukraine for creating dangerous pathogens.

According to a removed web page retrieved by GreatGameIndia, former President Barack Obama pushed an arrangement that resulted in the development of biolabs processing “especially dangerous pathogens” in Ukraine.

The headlines come on the same day that Biden administration operative Victoria Nuland informed the United States Senate that the American government is anxious over biological research centers slipping into Russian control as a consequence of the escalating fighting in Eastern Europe.

Now, we have official confirmation from US Under Secretary that Russia indeed planned to attack Bioweapons labs in Ukraine and that Washington was working with Kiev on dangerous pathogens in those labs authorized by former US President Barack Obama himself.

The article “Biolab Opens in Ukraine,” which was originally published on June 18th, 2010, describes how Obama, when functioning as an Illinois Senator, helped secure an agreement to create a level-3 bio-safety laboratory in the Ukrainian city of Odessa.

The story, which notably emphasized the efforts of former Senator Dick Lugar, was also published in Issue No. 818 (read below) of the USAF Counterproliferation Center’s Outreach Journal.

“Lugar said plans for the facility began in 2005 when he and then-Senator Barack Obama entered a partnership with Ukrainian officials. Lugar and Obama also helped coordinate efforts between the U.S and Ukrainian researchers that year in an effort to study and help prevent avian flu,” read the report.

The Odessa-based laboratory “is responsible for the identification of especially dangerous biological pathogens,” according to a 2011 report from the United States National Academy of Sciences’ Committee on Anticipating Biosecurity Challenges of the Global Expansion of High-Containment Biological Laboratories.

“This laboratory was reconstructed and technically updated up to the BSL-3 level through a cooperative agreement between the United States Department of Defense and the Ministry of Health of Ukraine that started in 2005. The collaboration focuses on preventing the spread of technologies, pathogens, and knowledge that can be used in the development of biological weapons,” the report continues.

“The updated laboratory serves as Interim Central Reference Laboratory with a depozitarium (pathogen collection). According to Ukrainian regulations, it has a permit to work with both bacteria and viruses of the first and second pathogenic groups,” explains the report.

The BioWeapons Prevention Project’s supplemental report documenting Ukraine’s biolab network goes into considerable detail about the pathogens with which the institution has done research.

Ebola and “viruses of pathogenicity group II by using of virology, molecular, serologica, and express methods” were amongst the pathogens examined by the laboratory.

The facility also offered “special training for specialists on biosafety and biosecurity issues during the handling of dangerous biological pathogenic agents.”

The discovery of the biolab plant comes after the US government faced severe criticism for funding dangerous “gain-of-function” experiments in Wuhan at a Chinese Communist Party-run facility with military cooperation.

We need your support to carry on our independent and investigative research based journalism on the Deep State threats facing humanity. Your contribution however small helps us keep afloat. Kindly consider supporting GreatGameIndia.
SOURCE: https://greatgameindia.com/obama-authorized-biolabs-ukraine/
Share 0 FacebookTwitterPinterestLinkedinEmail
previous post