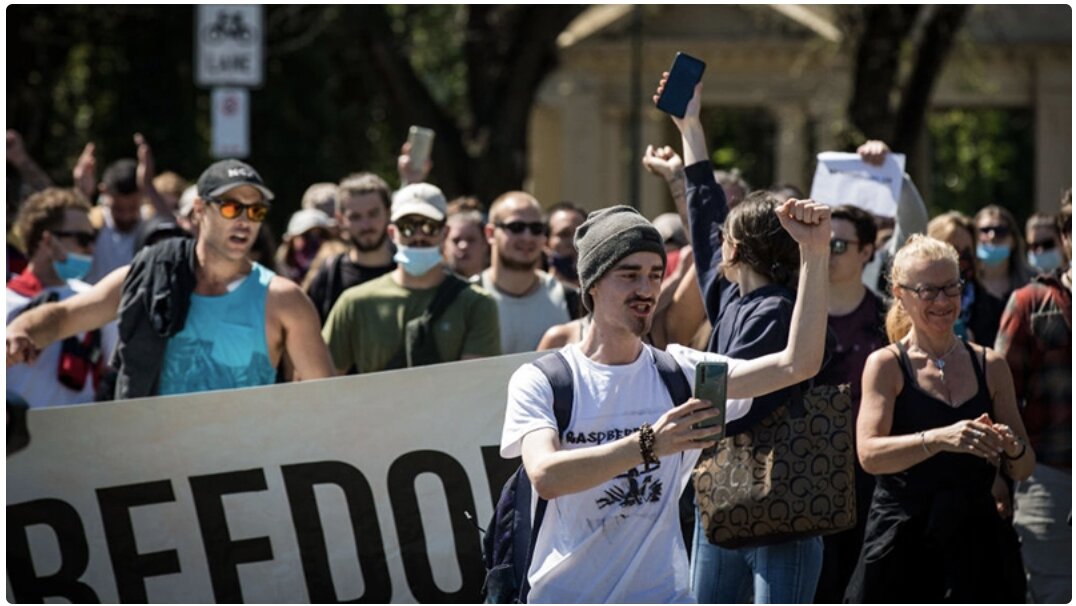 A large group of demonstrators gathered around the state parliament in Victoria, Australia to demand an end to a recently imposed vaccine mandate and protest a draft pandemic bill that would grant draconian powers to officials.

Photos and videos circulating on social media show a vast crowd outside Parliament House in Melbourne, the state capital, on Saturday, where activists were seen holding signs and placards – one reading “Sack Dan,” referring to state Premier Daniel Andrews.

Similar chants calling for Andrews’ resignation were also heard erupting from the crowd, while other slogans included: “End the mandates,” “Stop medical apartheid,” and “We need Bill of Rights!”

CNN goes all in playing PR for the vax, fact checks favor ambiguous answers, the Poynter claims to promote ethical journalism while giving unethical directives concerning the death of Colin Powell, and NPR accidentally admits to ADE… sponsored by Facebook. Here’s you media malfeasance for the week beginning 10/25/21

Activists also gave speeches at various points, denouncing the vaccine mandate for “essential workers” that took effect in Victoria earlier this month, as well as a proposed bill making its way through parliament meant to replace the Covid-19 emergency powers currently in place.

The controversial bill would amend a number of other laws if enacted, introducing the country’s steepest fines for non-compliance with health orders and even possible jail time. Anyone found to have deliberately breached a rule, and placed another person at risk in the process, could face up to two years in prison, while other rule-breakers could be fined up to AU$90,500 (US$68,000). Businesses found to be in violation face fines of AU$452,500, though the state government has vowed to impose the maximum penalties only “rarely.”

Introduced to parliament on Tuesday, the bill would also empower Victoria health officials to declare new states of emergency and reimpose lockdowns and other pandemic restrictions, drawing vocal condemnation from lockdown-weary residents.

While Melbourne was placed under lockdown on six separate occasions beginning in March 2020, spending nearly nine months under stay-at-home orders cumulatively, the city’s restrictions were again eased on Friday, with travel bans and outdoor mask mandates lifted, among other things. Victoria as a whole, however, remains under some Covid-19 measures, including 75% capacity rules at indoor entertainment venues and limits on outdoor gatherings to just 30 people.

Saturday’s demonstration in Melbourne appeared to breach the latter rule given its large turnout, however in contrast to previous protests in the city, police did not appear to have a forceful presence and it is unclear if any arrests were made.