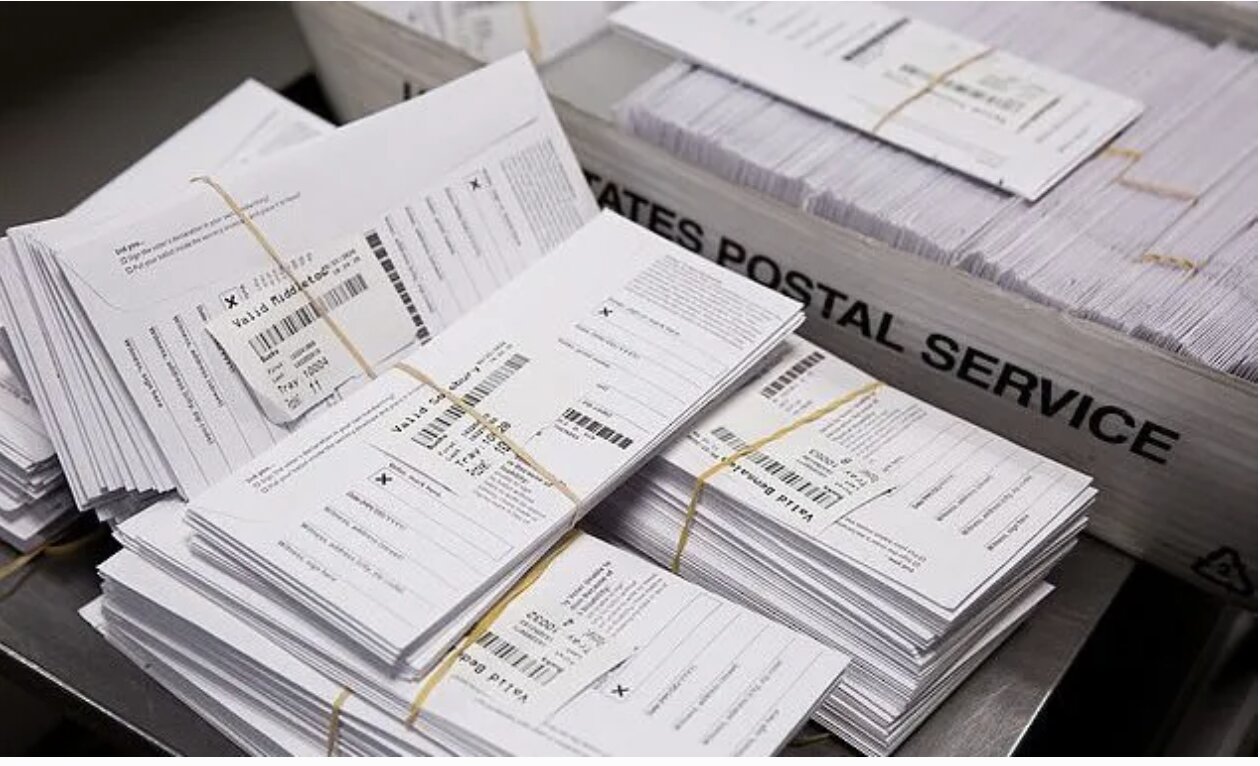 A temporary contractor in the battleground state of Pennsylvania “mistakenly” threw military mail-in ballots for President Donald Trump in the trash, county officials have admitted.

The mail-in ballots were found in a dumpster next to the elections building.

A top federal prosecutor announced on Thursday that his office had launched an investigation into the discarded mail-in ballots cast in the upcoming 2020 U.S. presidential election.

The incident drew the attention of Trump who claimed it as proof that mail-in voting can not be trusted and is highly susceptible to fraud.

DailyMail report: Luzerne County Elections Bureau claimed it stemmed from an administrative error and that county officials had not known who the votes were cast for until it was disclosed by the Justice Department earlier this week.

UMOVA is an acronym for ballots from military and overseas voters.

The ballots were found in a dumpster next to the elections building.

Pedris said the worker began on September 14 but the the error was discovered by Luzerne County Elections Director Shelby Watchilla two days later.

‘Ms. Watchilla immediately began an internal inquiry and informed her direct supervisor. The temporary independent contractor was removed from service and informed not to return,’ Pedri said.

Watchilla ‘contacted Luzerne County Office of Law who researched the matter and advised that this needed to be reported to the authorities’.

A request was then made to district attorney’s office.

Pedri added that ‘all garbage from the Elections Bureau’ accumulated during the three days the contractor was working there was ‘placed in a dumpster and secured by Luzerne County staff’.

In a highly unusual public statement on Thursday, U.S. Attorney for the Middle District of Pennsylvania, David Freed, said his office and the FBI were contacted on Monday by Luzerne County District Attorney Stefanie Salavantis amid concerns about ‘potential issues with a small number of mail-in ballots at the Luzerne County Board of Elections.’

He said his office could confirm that a ‘small number of military ballots’ were discarded.

‘Of the nine ballots that were discarded and then recovered, seven were cast for presidential candidate Donald Trump. Two of the discarded ballots had been resealed inside their appropriate envelopes by Luzerne elections staff prior to recovery by the FBI and the contents of those two ballots are unknown,’ he added.

‘Our investigation has revealed that all or nearly all envelopes received in the elections office were opened as a matter of course,’ Freed added.

‘It was explained to investigators the envelopes used for official overseas, military, absentee and mail-in ballot requests are so similar, that the staff believed that adhering to the protocol of preserving envelopes unopened would cause them to miss such ballot requests.’

In an earlier statement posted online, Freed’s office had originally claimed all nine ballots had been cast for Trump. The link was abruptly removed later in the day on Thursday, and a revised statement was issued.

Dawn Clark, a spokeswoman for Freed’s office, said the ballots ‘were improperly opened’ by county staff.

The news about the investigation in Pennsylvania, a state Trump carried in 2016 by 44,000 votes, could add fuel to Trump’s efforts to cast doubt on the legitimacy of the upcoming election.

He has often asserted, without evidence, that widespread mail-in voting will lead to fraud. Democrats, meanwhile, have encouraged voting by mail so that Americans can safely vote during the COVID-19 pandemic.

ABC reports that Attorney General William Barr personally briefed the president about the ballots shortly before the investigation was announced.

Speaking at the White House on Thursday, Trump said there had been ballots with his name on them found in a waste-paper basket.

‘We want to make sure the election is honest and I’m not sure that it can be. I don’t know that it can be with this whole situation, unsolicited ballots,’ Trump said.

He later spoke on Fox News Radio where he again argued that mail-in voting would lead to widespread fraud in the the election.

‘They were Trump ballots – eight ballots in an office yesterday in – but in a certain state and they were – they had Trump written on it, and they were thrown in a garbage can. This is what’s going to happen,’ Trump said in the interview.

‘This is what’s going to happen, and we’re investigating that.”‘

The announcement from the U.S. Attorney’s Office in the Middle District of Pennsylvania had made not mention of ‘fraud’.

Critics of the White House have spoken out saying that the incident is being used politically to bolster Trump.

‘This is an ongoing investigation where there is no public interest reason to override the usual policy of not commenting — and especially not to say for whom the ballots were cast. An unprecedented in kind contribution to the president’s campaign,’ Matthew Miller, the former director of the Justice Department’s public affairs office, said on Twitter.

However Trump’s team continued to push the story as evidence.

‘Democrats are trying to steal the election,’ Matt Wolking, the deputy director of communications and rapid response with the Trump campaign, tweeted.

Baxter Dmitry is a writer at Your News Wire. He covers politics, business and entertainment. Speaking truth to power since he learned to talk, Baxter has travelled in over 80 countries and won arguments in every single one. Live without fear.
Email: baxter@yournewswire.com
Follow: @baxter_dmitry
https://newspunch.com/mail-sorter-caught-mistakenly-throwing-military-mail-in-ballots-for-trump-in-the-trash/
Share 0 FacebookTwitterPinterestLinkedinEmail
previous post