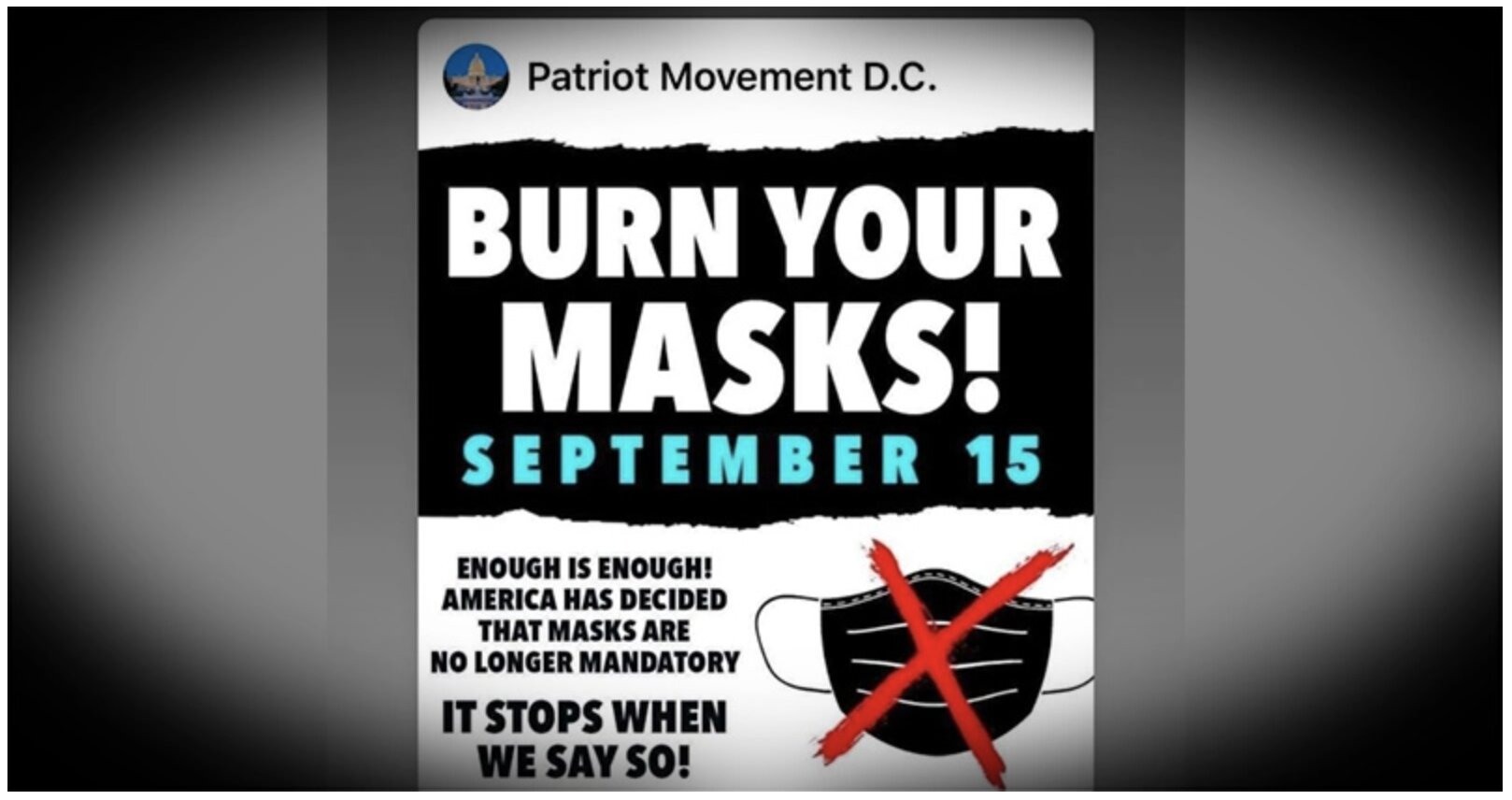 People are tired of the scamdemic

“Burn Your Mask Day” proved to be a smash hit on Tuesday September 15, with good-hearted citizens torching their government or corporate-mandated face diapers in a show of defiance against the Coronavirus “Scamdemic” threatening the freedom and future of humanity.

The “No More Masks” movement has been spreading covertly. 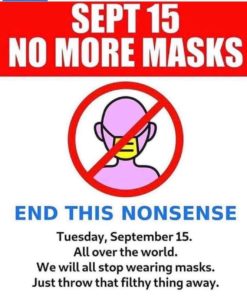 Vaccine oligarch Bill Gates expressed apathy in a CBS interview about the fact that his Moderna Coronavirus vaccine, which National Institutes of Health (NIH) has a financial stake in, is testing horribly in vaccine trials, with at least 80 percent of trial subjects reportedly suffering side effects. This news comes on the heels of a major protest in Africa against Coronavirus vaccines being tested on black people on the continent.

Military insurer Tricare admitted that it wrongly told more than 600,000 U.S. military members that they had the virus. Hospitals in Florida are showing massive problems with testing accuracy, with Orlando Health admitting that its 98 percent positive rate was actually 9.4 percent. The CDC admitted that it is mixing antibody and viral test results to derive its case numbers and you can test positive on an antibody test if you have antibodies from a family of viruses that cause the common cold. Here is Gates responding to vaccine side effects:

No wonder people in Africa are protesting the vaccine tests.

National Institutes of Health (NIH) own a financial stake in the Bill Gates-funded Moderna Coronavirus vaccine, raising big questions about the supposed impartiality of the federal government’s policy decisions during the Coronavirus outbreak. NIAID director Dr. Anthony Fauci, a financial ally of Bill Gates whose institute partnered on the Moderna vaccine and is part of NIH, has been critical of Hydroxychloroquine and the FBI even raided a health spa serving intravenous vitamin C, which are competitors to a vaccine.

“We do have some particular stake in the intellectual property” for the Moderna vaccine stated Francis Collins, the director of NIH, in a revelatory recent Economic Club panel discussion. “One of the vaccines– the one that’s furthest along– what started, actually, at the federal government in our own Vaccine Research Center at NIH– then worked with a biotechnology company called Moderna to get to where we are now, with very impressive Phase I results and getting ready to go into a large-scale trial as early as July. That one, of course, we do have some particular stake in the intellectual property. Others, though, come from companies who’ve invested their efforts into getting them to the point where they might now be ready for a trial,” Collins stated.

“The U.S. government may jointly own a potential coronavirus vaccine. The National Institutes of Health (NIH) has played a critical role in coronavirus research for years. Building off this work, federal scientists have helped design and test mRNA-1273—a vaccine candidate developed in partnership with Moderna.[2] The federal government has filed multiple patents covering mRNA-1273. In this report, we describe two patent applications that list federal scientists as co-inventors.[3] If the government successfully pursued its patent filings, the resulting patents would likely confer significant rights. We also review recently disclosed contracts between NIH and Moderna. The agreements suggest that NIH has not transferred its rights, but instead maintains a joint stake.”

Eight members of the National Institutes of Health (NIH) expert COVID-19 Treatment Guidelines Panel disclosed recent financial relationships with Gilead, the drugmaker that is introducing an expensive Coronavirus competitor to Hydroxychloroquine, the inexpensive anti-malarial drug that President Trump has promoted which many people claim has helped them. This financial relationship between NIH experts and Gilead is especially concerning in light of revelations that NIH has a financial stake in the Bill Gates-funded Moderna vaccine, another competitor to Hydroxychloroquine. Chloroquine critic Dr. Anthony Fauci’s NIAID, which funded the Bat Coronavirus research at the Wuhan Institute of Virology believed to be the source of the outbreak, is part of NIH.

HERE IS THE FINANCIAL DISCLOSURE LIST FOR THE NIH EXPERT CORONAVIRUS TREATMENT PANEL. The experts with disclosed ties to Gilead include consultants, people who provided Gilead research support, and honoraria. Members of the panel also disclosed ties to Merck and INOVIO Pharmaceuticals, which took $9 million from a Gates-backed company to develop a Coronavirus vaccine.

Gilead is driving up their prices from what was previously expected (as the company has done in the past, sparking bipartisan condemnation from Senators Grassley and Wyden). No wonder, then, VA study.