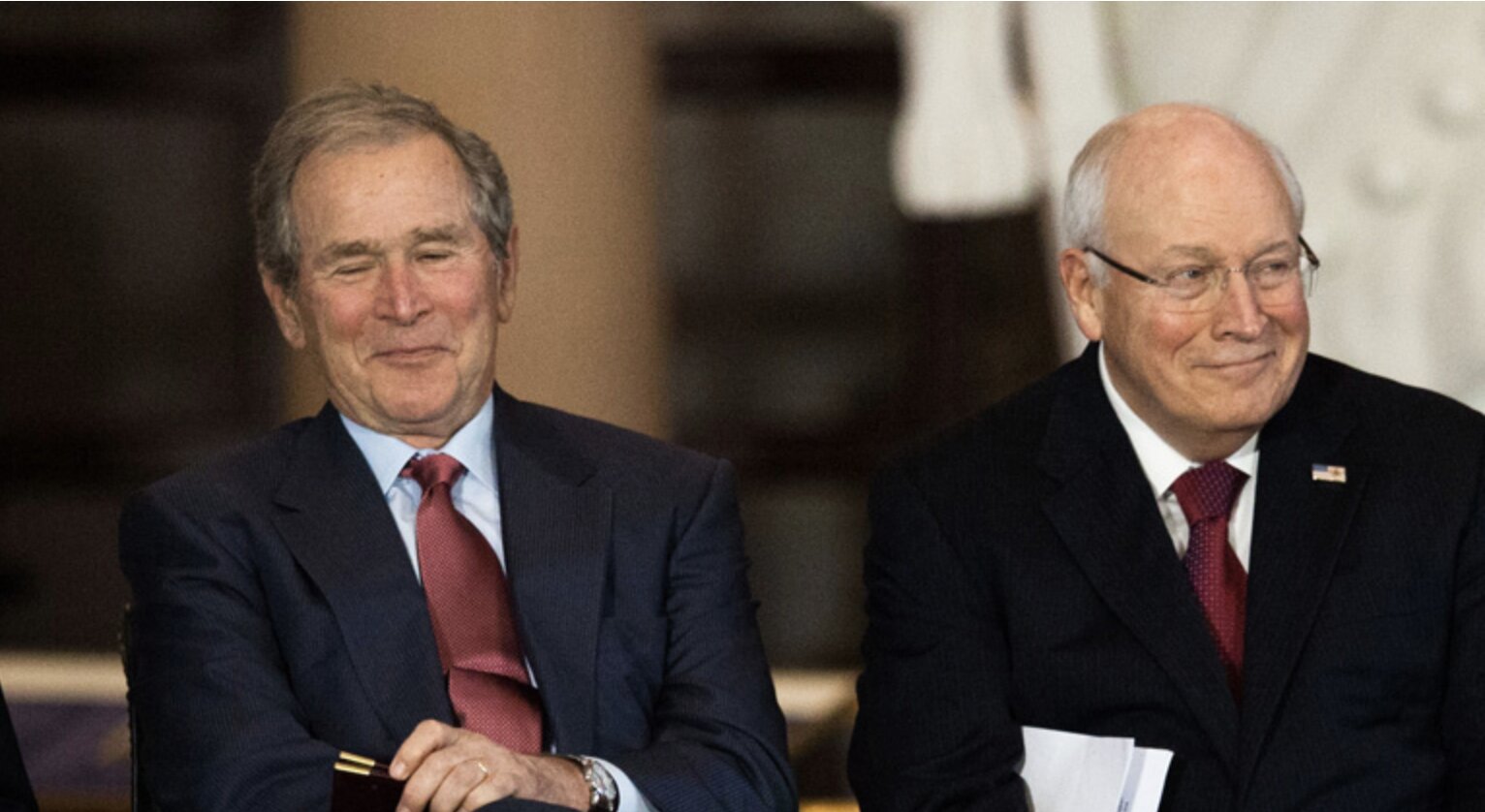 Whether we’re commanded to trust the expert, abandon the rule of law, or venerate government for “keeping us safe,” the 9/11 panic and our current crisis have many things in common

During March and April of this year—during the early days of the covid-19 panic—each day came to be accompanied by a general feeling of dread.

As new emergency orders and decrees rained down from governors, mayors, and faceless health bureaucrats, I wondered “what new awful thing will governments think up today?” As business and churches were closed by government edict, politicians increasingly were threatening to arrest and jail ordinary citizens for doing things that were perfectly legal mere days before.

Even worse was the new orthodoxy that seemed to immediately spring up. All dissent from the new regime of lockdowns and business seizures was denounced and mocked. We were now all expected to chant new slogans. “We’re all in this together. Flatten the curve.”

There was no sign of any sizable opposition. The courts were silent. So-called due process was abandoned.

But for those of us who are old enough to remember the dark times that followed the 9/11 attacks, the feelings of dread had a familiarity to them.

The blind sloganeering, the anger toward dissent, and the obeisance toward politicians who were credited with “keeping us safe,” brought back bad old memories.

They were memories of the days and months and years that followed the 9/11 attacks. These were the days of so many new assaults on basic human freedoms and human rights. They were days when the public was bullied into accepting whatever new scheme politicians were dreaming up in the name of keeping us “safe.”

In many ways, the current hysteria is even worse than that of the early years of the twenty-first century. It affects the everyday lives of countless Americans in ways the 9/11 panic did not.  But the current crisis is nonetheless very much a continuation of the attitudes and paranoia that surged nineteen years ago.

Then, as now, the public was repeatedly instructed to trust the experts and not question government officials in any way. This manifested itself in a couple of ways. First of all, there was new legislation like the so-called Patriot Act a smorgasbord of new freedom-destroying federal initiatives that would authorize all sorts of new spying and search powers by the federal government. Soon after, of course, came new additional powers, such as the president’s power to declare anyone an “enemy combatant” and subject to torture, imprisonment, and forfeiture of all legal rights.

Those who objected were denounced as reckless and naïve, and unconcerned for human life. Torture, we were told, was absolutely necessary for public safety. The opposition was said to be unfit to comment on the matter or question federal powers because the “experts”—i.e., CIA personnel, etc.—understood the real dangers.

The trust-the-experts claim was trotted out again when the Bush administration and the CIA began to collaborate to “prove” that Saddam Hussein was somehow responsible for the 9/11 attacks, and was harboring “weapons of mass destruction” (WMDs) to use on Americans. Politicians and bureaucrats went into high gear, creating countless reports, studies, and claims from alleged witnesses showing that the Iraqi regime was just itching to launch its WMDs at innocents around the world.

The experts, of course, were wrong. Moreover, many were simply lying. There were no WMDs, and Saddam had nothing to do with 9/11. But millions of Americans believed the experts, and thus believed the lies.

And now we see the same thing today. We’re repeatedly ordered to trust the official arbiters of scientific truth. Never mind the fact, however, than many other experts have dissented on a wide variety of topics from the lethality of covid-19, to the wisdom of lockdowns. But they’re not the real experts, we’re told. Then as now, it’s only acceptable to believe the experts who support untrammeled growth in state power.

Any outbreak of panic, fear, and uncritical support for despotism requires its own vocabulary. Nowadays, we have all sorts of new slogans. These include “we’re all in this together,” “flatten the curve,” “this is the new normal,” “#stayhome,” and “sixfeetapart.”

Many of the slogans are delivered in a cheerful tone, but they’re really joyless commands, issued to communicate to the hearer that obedience to these declarations is not really optional. Either you obey, or you are essentially a murderer.

The world of post-9/11 hysteria was similar. We had slogans like “support the troops,” “thank you for your service,” and “if you see something, say something.”

Other catchphrases weren’t quite at the level of slogans, but they were invoked repeatedly to encourage uncritical acceptance of the official government line. Examples include “they hate us because we’re free,” “you’re with us or your with the terrorists,” and “we’re fighting them over there so we don’t have to fight them here.”

Due to the lack of social media back then, we didn’t have quite the proliferation of slogans we have now. Had we had hashtags in 2003, it’s likely we would have regularly encountered phrases like #globalwaronterror, #wmds, and #supportthetroops.

The use of these phrases also functioned as a means to “virtue signal.” In 2002, putting a yellow ribbon magnet on one’s car or sporting an American flag lapel pin were ways to publicly show one’s loyalty to the cause, and show opposition to one’s less enthusiastic neighbors and relatives who “hate America.”

The real message behind these phrases and signals, of course, was that we are required to support the regime and its “new normal” whatever it may be. In 2001, that meant supporting new wars while ignoring the Bill of Rights, and turning a blind eye to abuses like CIA torture programs. Today, it means calling the cops on your neighbor for not social distancing. It means screaming at people for not wearing a mask. It means blindly trusting the “experts” so long as those experts support unlimited government power.

The “if you see something, say something” slogan was part of a larger effort to remind the public that it should live in a state of constant fear. Maybe your neighbor is plotting to blow you up. It’s better to be safe than sorry: spy on your neighbors for the FBI.

Many people now forget that in the days immediately following 9/11, Americans were buying gas masks, and planning backyard bunkers. The then-new Department of Homeland Security in February 2003 advised Americans to prepare for a chemical attack from terrorists: “Stash away duct tape and pre-measured plastic sheeting for future use. Experts tell us that a safe room inside your house or apartment can help protect you from airborne contaminants for approximately five hours – that could be just enough time for a chemical agent to blow away.”

For those who wanted all the “best” new information on how to prepare, the federal government created the web site ready.gov, complete with a section for children called “Ready Kids” where kids could learn—in the spirit of the old “Duck and Cover” videos from the Cold War—how to prepare for an attack from terrorists.

And then there was the color-coded Homeland Security Advisory System. This was a visual aid which allowed the federal government to let us know just how much we should fear terrorism on any given day. Of course, the government always kept the warning level at “elevated” or “high.” It never dropped down to “low,” of course, lest some form of terrorism take place on that and the “experts” look like they were asleep at the switch.

Today, of course, we have countless web sites, models, and news stories devoted to reminding the public that it must constantly fear Covid-19 infection. Were there a color-coded alert system for the current crises, we can be quite confident it would be set each day to “high” or “severe.” As with the 9/11 panic, this is all in service to encouraging unquestioning obedience to government authorities, and to send the message there is no time for political debate, dissent, or even due process. Our “leaders” keep us safe and we must defer to their judgment completely.

The media itself remains an accomplice in this. Then, as now, media pundits and “journalists” side reflexively with officials promoting fear and obedience to the state.

Living with the Aftermath

It takes many years for a society to recover from fits of panic and paranoia such as these. 19 years after 9/11, the federal government still has the power to spy on law-abiding Americans with impunity. It still has the power to simply assassinate American citizens—including children—without any due process. American police have been militarized with “surplus” military hardware from various failed and failing wars. The taxpayers will still be paying interest on the trillions of dollars spent on disastrous wars in Iraq and Afghanistan decades from now. Thousands of American troops died for nothing in conflicts that have done nothing to make any American safer. (Hundreds of thousands of innocent foreigners have died in those same conflicts.)

Thanks to the reaction to 9/11, governments in the US are now far larger, far more expensive, and far less limited by laws and constitutions than in the past. This is what happens when a country believes itself to be in a constant state of emergency. Due process is out the window. Governments get away with far more than would have been the case otherwise.

This process, which was so greatly accelerated after 9/11, has now be supercharged during the current panic of covid-19. Government officials issue “laws” and decrees without any debate and without any due process. Americans are ruined, arrested, destroyed, and humiliated in the name of “safety.” Those who dissent and seek to limit the regime’s powers are silenced, threatened, arrested, shouted down, and ignored.

This is America in a state of permanent emergency. The justification for the regime’s ever-growing power changes over time. But the results are the same.

Macron: ‘Turkey is no longer a partner in the Mediterranean region.’