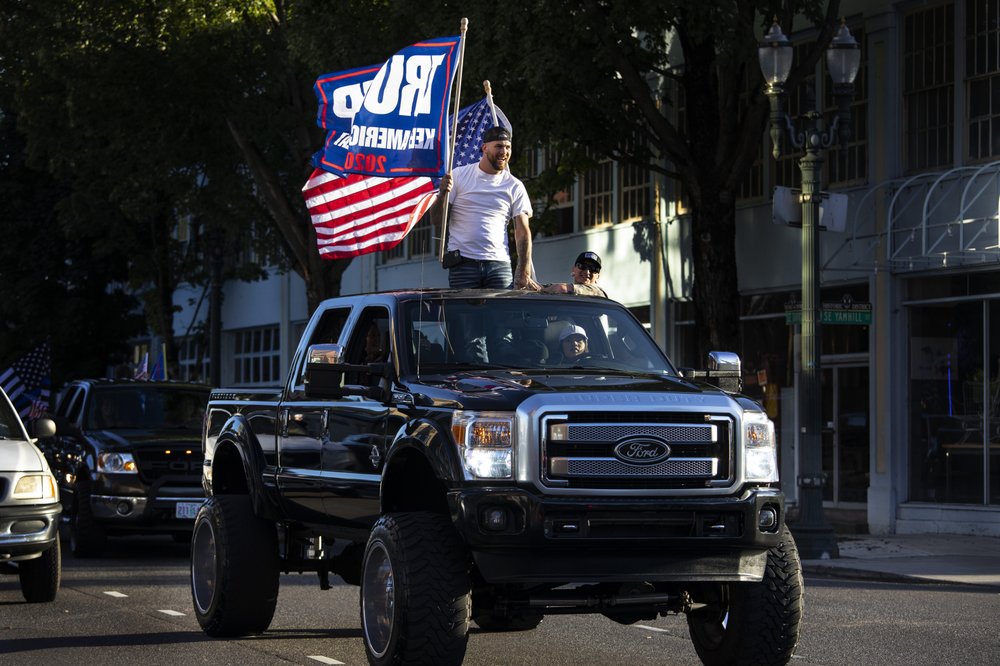 Scenes of Trump supporters firing paint and pellet guns at protesters during a “Trump cruise rally” caravan through downtown Portland – a liberal bastion that has been the site of weeks of street demonstrations – raised the specter that the nation’s summer of unrest had entered a new phase in which the president’s backers are rallying to defend businesses and fight back against Black Lives Matter and other groups he has labeled “anarchists” and “terrorists.”

One man, thought to be a member of a pro-Trump group, was shot and killed Saturday night during the Portland unrest.

In tweeting a video of the caravan on the move, Trump called the participants “GREAT PATRIOTS!” The reaction marked a sharp contrast to his silence during a large and peaceful civil rights march on Friday in Washington that drew thousands to the National Mall, where some speakers denounced his leadership.

In a statement Sunday afternoon, Democratic presidential nominee Joe Biden “unequivocally” condemned the Portland shooting and accused Trump of “fanning the flames of hate and division in our society and using the politics of fear to whip up his supporters.”

“We must not become a country at war with ourselves; a country that accepts the killing of fellow Americans who do not agree with you; a country that vows vengeance toward one another,” Biden said. “But that is the America that President Trump wants us to be, the America he believes we are.”

The violence has escalated as Trump has seized on the social justice protests as a campaign wedge, attempting to tie Biden to “radical” elements on the left. Eager to shift the political debate from the rising deaths and economic toll of the pandemic, Trump has relentlessly attacked Democratic mayors and governors for failing to quell protests, and he dispatched federal law enforcement authorities into cities to help arrest demonstrators.

This week, Trump and Biden will move to address the protests in a more prominent way. Trump on Tuesday is set to travel to Kenosha, Wis., where the police shooting of Jacob Blake, a Black resident left paralyzed, provoked street protests that culminated in the shooting deaths of two others. Kyle Rittenhouse, a White 17-year-old who had illegally obtained a rifle, was charged with first-degree intentional homicide in the killings, which came after a fledgling militia group had posted a call to arms on Facebook.

White House aides said Trump will tour property damage and meet with law enforcement officials, but they did not disclose any plans for the president to meet with Blake’s family.

Meanwhile, Biden aides said the candidate, who had maintained a lean campaign schedule, will launch a more robust public presence with a speech in southwestern Pennsylvania on Monday to address Trump’s handling of the pandemic and his response to the social justice protests.

“The only people to blame for the violence and riots in our streets are liberal politicians and their incompetent policies that have failed to get control of these destructive situations,” White House spokesman Judd Deere said in a statement. “This President has condemned violence in all its forms. Americans want peace in their streets and for their children to grow up in safe neighborhoods, and only President Trump has shown the courage and leadership to achieve law and order and deliver results.”

Trump’s conservative supporters, including Fox News host Tucker Carlson, have seized on Rittenhouse as a figure of sympathy, suggesting that he acted legally and in self-defense. The president on Sunday appeared to offer his support by liking a tweet from a self-described former liberal activist who cited Rittenhouse as a reason to vote for Trump.

Conservatives also rallied around the Trump caravan in Portland, where the man who was killed was wearing a hat bearing the words “Patriot Prayer,” the name of a far-right group organized in 2016 to bring pro-Trump rallies to liberal strongholds.

In a tweet, Trump referred to Biden as a “puppet” of “crazed leaders” on the left who envision the Portland chaos as emblematic of “Joe Biden’s America.”

“This is not what our great Country wants,” Trump wrote. “They want Safety & Security, and do NOT want to Defund our Police!”