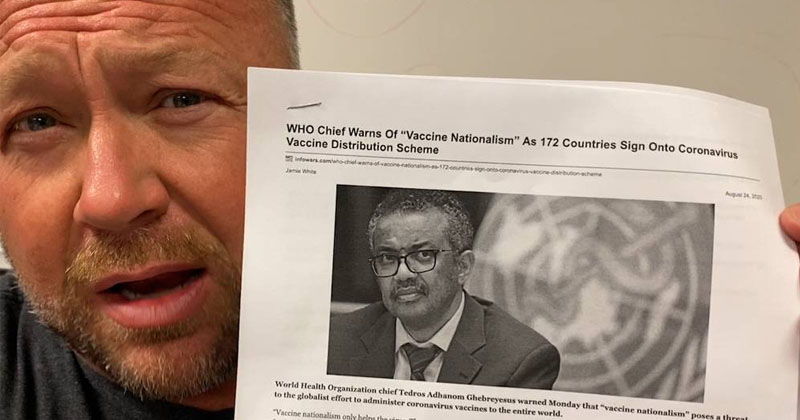 WHO chief takes swipe at President Trump and America, who recently withdrew from globalist organization

Infowars.com – AUGUST 24, 2020
Alex Jones offers his latest analysis about the pro-China WHO chief’s latest warning against “vaccine nationalism” as the globalists prepare to roll out their coronavirus vaccines worldwide in the coming months.
SOURCE:  https://www.infowars.com/breaking-un-announces-plans-for-forced-covid-19-injections-worldwide/

READ NOW WHAT THE WHO PUBLISHED ON THIS…

Warning against “vaccine nationalism” in the COVID-19 pandemic, the head of the World Health Organization (WHO) has again underlined the importance of global solidarity in addressing the crisis.

edros Adhanom Ghebreyesus on Tuesday said he has written to WHO Member States, urging them to join the COVAX Global Vaccines Facility, a mechanism aimed at guaranteeing fair access for all countries, rich or poor, to effective immunization.

“While there is a wish amongst leaders to protect their own people first, the response to this pandemic has to be collective,” he said.

“Sharing finite supplies strategically and globally is actually in each country’s national interest.”

The COVAX Global Vaccines Facility is the vaccine pillar of the ACT-Accelerator, an initiative launched in April to speed up development of medicines to treat COVID-19 and make them available to people everywhere.

It is operated by Gavi, the Vaccine Alliance; the Coalition for Epidemic Preparedness Innovations (CEPI), and WHO, alongside multinational and developing country vaccine manufacturers.

The facility works to ensure as many countries as possible cooperate to pool development, procurement and allocation of any COVID-19 vaccines, WHO Senior Adviser Dr. Bruce Aylward told journalists.

WHO has 194 Member States and so far, more than 170 countries have expressed interest: 92 nations that work with GAVI or that need assistance, and 80 “fully self-financing countries”, he said.

“The agreement terms which countries would sign to join the Facility are just being finalized. We are looking for an indication, a firm indication, for countries by the 31 August”, Dr. Aylward reported.

Tedros also detailed logistical hurdles WHO has faced in shipping lifesaving medical equipment to countries worldwide over the past eight months as demand for medical masks, gowns and other personal protective equipment (PPE) increased.

While factors such as lockdowns, a collapse in air transport, and export restrictions affected PPE manufacturing and distribution, Tedros reported that there also were several instances where key medical supplies were requisitioned for national use.

“Supply nationalism exacerbated the pandemic and contributed to the total failure of the global supply chain”, he stated.

The lessons learned will inform the eventual distribution of COVID-19 vaccines and medicines once they are developed.

“As new diagnostics, medicines and vaccines come through the pipeline, it’s critical that countries don’t repeat the same mistakes”, he said, adding that “we need to prevent vaccine nationalism.”