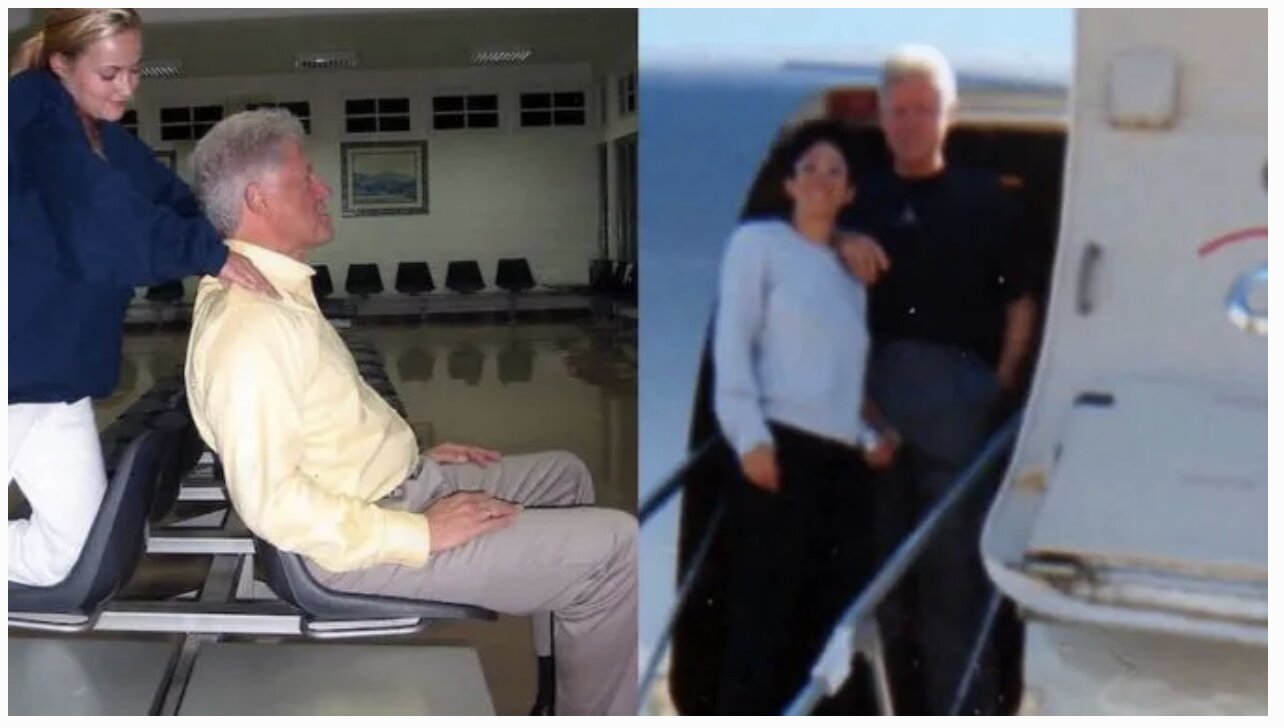 The Democratic Convention has been thrown into chaos as new photos emerge showing former President Bill Clinton receiving a “massage” from one of convicted pedophile Jeffrey Epstein’s sex abuse victims.

The never-before-seen photos were published just hours before Clinton, 72, is due to endorse Joe Biden for president at the Democrat Convention.

DailyMail report: The troubling pictures are an ill-timed reminder of Clinton’s links to Epstein.

Clinton traveled numerous times on the dead pedophile’s private Jet, the Lolita Express, socialized with his alleged Madame, Ghislaine Maxwell, and faced a slew of sexual misconduct accusations himself during his years in public life.

Clinton, then 56, had complained of having a stiff neck after falling asleep on Epstein’s infamous private jet, nicknamed The Lolita Express, while on a humanitarian trip with the pedophile to Africa in September of 2002.

Maxwell, who is now in prison on sex trafficking charges, repeatedly encouraged Davies to give Clinton a massage while the group was refueling at a small airport in Portugal after flying in from New York.

After Maxwell’s insistence, Clinton asked the twenty-something: ‘Would you mind giving it a crack?’

The images show Clinton dressed in a yellow button down shirt and beige slacks with his hands resting on his lap, as he leaned back while Davies knelt on a chair behind him for a better angle.

In a second image, Clinton seems to be smiling in relief as a sweatpants-clad Davies massages him.

Davies, who has claimed she was raped by Epstein several times after being recruited by Maxwell, said Clinton was a ‘complete gentleman‘ on the trip.

She previously said she was invited to travel to Africa one week before the departure, and when she arrived to the airfield, she was instructed to wear a uniform to look professional.

Davies acted as an air stewardess on the flight and described being shocked when Clinton boarded the plane, saying he was ‘charming and sweet’.

Davies, now in her early 40s, said of the massage pictures: ‘Although the image looks bizarre, President Clinton was a perfect gentleman during the trip and I saw absolutely no foul play involving him.’

She explained the massage happened when ‘we had a stop-over for the jet to refuel and while we were in the terminal the ex-President was complaining of stiffness from falling asleep in his chair.

‘Ghislaine chimed in to be funny and said that I could give him a massage.

‘Everyone had a little chuckle but Ghislaine in her prim British accent insisted and said I was good. The President then asked me ”would you mind giving it a crack’‘.

Baxter Dmitry is a writer at Your News Wire. He covers politics, business and entertainment. Speaking truth to power since he learned to talk, Baxter has travelled in over 80 countries and won arguments in every single one. Live without fear.
Email: [email protected]
Follow: @baxter_dmitry
Source: https://newspunch.com
FOR MORE ON THIS. SEE THE DAILY MAIL’S ARTICLE EXCLUSIVE: ‘Would you mind giving it a crack?’ Bill Clinton leans back and smiles while receiving neck massage from Epstein victim, 22, in never-before-seen photos during trip on pedophile’s plane to Africa in 2002 – as he addresses Dem convention TONIGHT…
UrlPreviewBox
Share 0 FacebookTwitterPinterestLinkedinEmail
previous post