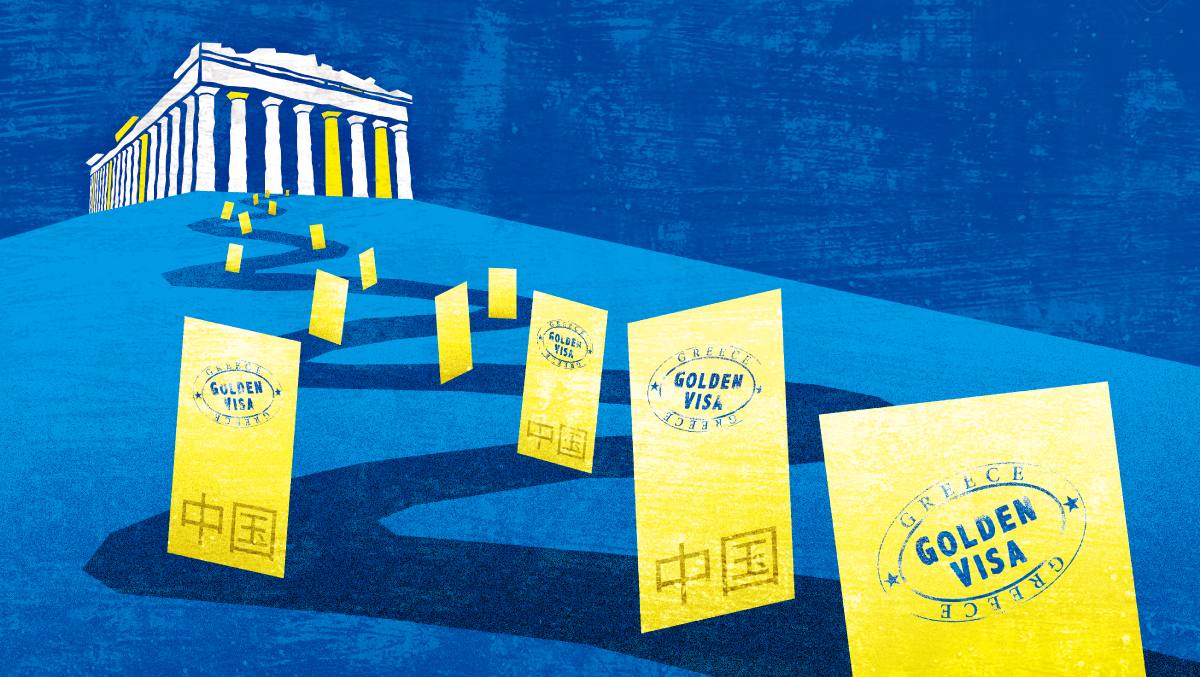 Chinese are taking advantage of a Golden Visa program in Greece that offers residency in return for property investment.   © Illustration by Michael Tsang

GIANNIS SEFERIADIS, Contributing writerAUGUST 18, 2020 04:06 JST
ATHENS — Zhao Cheng, who moved to Athens in 2018, doesn’t need a GPS on his phone as he has come to know the streets of the ancient city like the back of his hand.

Zhao and his wife started talking about leaving China in 2017. Their initial plan was to buy property and move to Malta, since English is an official language there. But bureaucratic and personal reasons led them to their second option: Greece. And in 2018, the couple and their seven-year-old son moved into a new house in a middle-class suburb bought for 250,000 euros, or $290,000.

The 32-year-old Zhao left China due to the high cost of education and dangerous levels of air pollution. “Here, I am able to have my son study in a private school that is both high-level and affordable and I can still wake up every morning surrounded by trees,” he told the Nikkei Asian Review. “My second choice turned out to be the best one.”

Greece and China, proud inheritors of ancient civilizations, are finding their modern day geopolitical and economic stars in increasing alignment. The former, still reeling from years of economic crisis and the tough love policies of its European neighbors, needs foreign investment. The latter, meanwhile, is keen to expand its global influence through a massive infrastructure initiative and sees fertile fields in the land of Aristotle.

Zhao and thousands of other Chinese are taking advantage of that confluence of interests. 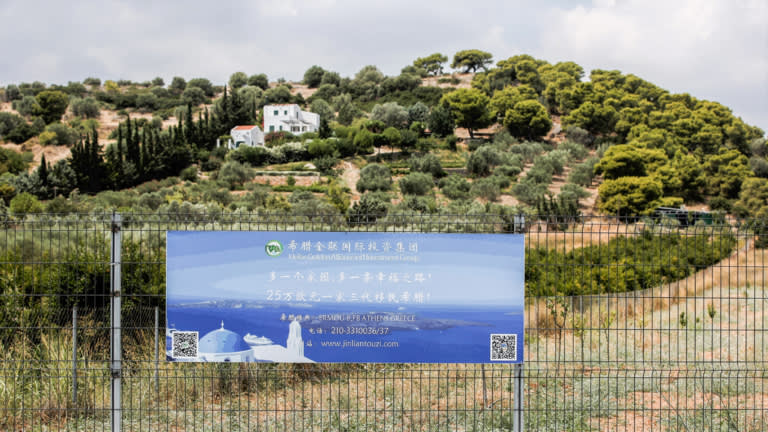 An advertisement for property is seen for the Hellas Golden Alliance International Investment Group in the coastal village of Artemida, east of Athens on Aug. 7. (Photo by Yannis Kolesidis)

In a bid to increase the amount of money coming into the country, Greece has for a number of years been offering what is called a Golden Visa, a residency permit that is also in effect a “free pass” for movement anywhere in Europe’s 26-country Schengen Area.

Such a visa, which Zhao obtained, requires an investment of at least 250,000 euros in Greek real estate and must be renewed every five years. Parents and children up to the age of 21 can accompany the buyer of the property. Citizenship can be applied for after seven years.

The system was implemented in 2013 amid the Greek debt crisis. As money fled the country and the unemployment rate skyrocketed along with political turmoil, the government used the offer of residency to entice foreign money. Six years on, the program has granted more than 7,800 Golden Visas and raised more than 2.6 billion euros. And more than 70% of the investors are Chinese.

Golden Visa holders are not allowed to be employed in Greece, but that is usually not an issue as they have the financial wherewithal to support themselves. Many are also retirees who like to buy detached houses close to the sea. Others choose not to move to the country but just receive rental income on their purchased properties. Lan Xiaocheng, chairman of the Hellas Golden Alliance International Investment Group, examines a brochure in front of buildings under construction and for sale to Chinese clients, in the coastal village of Artemida, east of Athens, Aug. 7. (Photo by Yannis Kolesidis)

Minister of Development and Investments Adonis Georgiadis says the visa program is up and running again after “freezing” early this year due to economic upheaval in China as the coronavirus spread there.

The Greek Immigration Bureau was also partially closed in the first few months of 2020 due to COVID-19. But in a sign of the scheme’s importance to Greece, the country is pushing improvements. “With our legislative initiative, we plan to make the program easier to operate in the midst of a pandemic,” Georgiadis told Nikkei by email.

Within the last two months, Greece has made a variety of regulatory changes to reduce red tape and allow for remote applications. Investors, for example, are now allowed to apply through agents.

Alexander Varnavas, a lawyer dealing with property cases, said he sees strong interest from buyers despite the global health crisis. “New requests are submitted, but there are still practical problems with travel bans,” Varnavas said.

Greece’s pandemic response was perceived as relatively better than some places in Europe and that has improved the country’s image among Chinese investors.

“Chinese demand for Greek Golden Visas has not slackened, even though the number of approvals dropped this year,” said Georg Chmiel, Executive Chairman of Juwai IQI, one of the top real estate networks in China and Southeast Asia. “We expect Greece to win a Chinese buyer’s market share from countries such as the U.K. and Spain, which have had much less success in the fight against COVID-19.”

Before the pandemic, the program was setting new records every year.

In 2016, 494 applications from around the world were approved. The figure rose to 2,412 in 2019. But according to Investment Migration Insider, which specializes in investment for residency programs, the number for the first half of 2020 came to just 376.

“In the absence of a pandemic, Greece would almost certainly have approved more than 3,000 main applicants in 2020,” said Christian Henrik Nesheim, the publication’s editor. “With the pandemic, they are likely to end up somewhere closer to their 2019 figures, possibly below,” Henrik added. “But this is temporary, and as soon as it’s logistically possible, volumes will grow.”

On the other hand, with other European countries launching similar Golden Visa programs, dozens of real estate companies have emerged and some have been linked with reports and allegations of money laundering.

In April, the European Commission criticized Bulgaria, Cyprus and Malta for their citizenship-by-investment programs seen as leading to possible money laundering and corruption.

And in 2018, a scandal involving a Greek businessman made headlines when he reportedly took POS, or point of sale, machines with roaming functions to China, where customers used credit cards to purchase real estate. The aim was purportedly to circumvent China’s strict capital restrictions when citizens purchase foreign real estate.

“There have been several distortions in the Golden Visa market in recent years,” according to lawyer Konstantinos Starantzis, “Now, many companies are getting oversight by the authorities. I estimate that within a few years the sector will be much more transparent.”

The wave of Chinese enthusiasm for the program came amid what has been hyped, especially in China’s state and Communist Party-controlled media, as a Sino-Hellenic “romance,” particularly between 2015 and 2019 when Greece was run by the former leftist government of Prime Minister Alexis Tsipras.

The countries have been referred to as long-lost cousins enjoying a happy reunion after being connected via the ancient Silk Road two millenniums ago. Chinese President Xi Jinping quoted a sentence from a Greek writer in November 2019 prior to visiting Greece. “Confucius and Socrates were two masks that covered the same face of human logic,” Xi wrote in the Greek newspaper Kathimerini, stressing the greatness of Greek culture and it’s closeness to China’s. Behind such rhetoric, however, is a hardheaded geopolitical push on the part of Beijing.

“The Chinese have overplayed their hand by stressing the cultural kinship between two glorious ancient civilizations and have clearly used this to promote their economic agenda in Greece,” said Plamen Tonchev, head of the Asia Unit at the Institute of International Economic Relations, or IIER, in Athens. “While cultural diplomacy is an increasingly important currency in international relations, China is clearly banking on it in pursuit of its economic and geopolitical objectives.”

Despite undisputed cultural glory, the present reality for Greece is that it remains badly in need of foreign investment. The economy mostly contracted from 2008 until 2016 and the unemployment rate was hovering around 20% even before the pandemic, which has hammered the critically important tourism sector.

During the debt crisis, there was widespread anger on the part of the Greek government, public and media toward Germany and the European Union for their perceived harsh stance toward the country’s plight. With those wounds still raw, the government has taken an open stance on investment from any legitimate source, including China, seen as less demanding and assertive than EU partners.

As China pursues Xi’s trademark Belt and Road Initiative, a massive infrastructure program that seeks to recreate the Silk Road, investment from public sources is also pouring into Greece. Chinese state-owned shipping company COSCO, for example, has been investing in and managing the seaport of Piraeus since 2010. COSCO became the majority stakeholder in 2016 and aims to make the port a strategic hub.

Furthermore, State Grid Corporation of China purchased 24% stake in Greek national power transmission operator ADMIE in 2017 and is now involved in the construction of a high-voltage underwater link between the island of Crete and continental Greece.

And the Bank of China and Industrial and Commercial Bank of China signed a loan agreement for 200 million euros with ADMIE in 2018 for construction of the underwater link.

The presence of the BOC and ICBC in Greece is potentially a positive development at a time when local banks are burdened with a heavy backlog of nonperforming loans — about 15 times as large as the average rate in the eurozone. But there are signs that Greece, given its increasing reliance on Chinese investment, is taking a pro-Beijing tilt in the EU.

In 2017 it blocked an EU statement at the United Nations criticizing China’s human rights record. And last month, as EU members discussed countermeasures against China in response to the imposition of a national security law in Hong Kong, Athens was notable for resisting tough measures.

“China invested in Greece when others were shying away from it,” conservative Prime Minister Kyriakos Mitsotakis said when he visited China in November of last year. “What our country needs now, more than ever, is investment.”

Still, the EU and the U.S. remain Greece’s main partners and as they continue to spar with China over global issues, striking a balance between those competing pressures stands to be a key challenge for Greek foreign and economic policy in coming years, no matter the political leanings of the country’s governments.