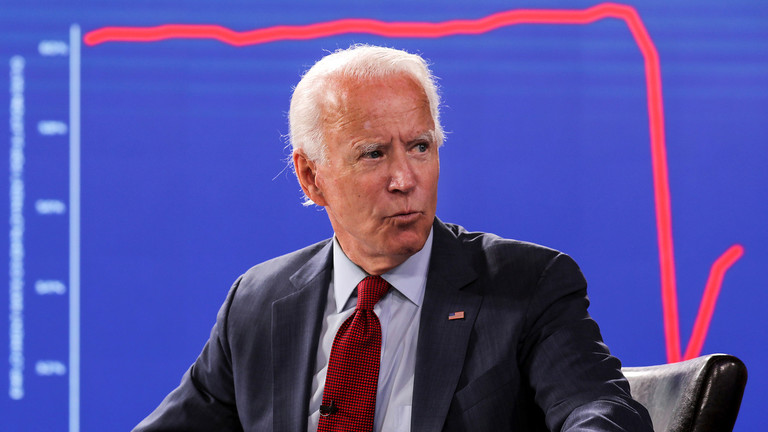 A video, showing Democratic presidential candidate Joe Biden arguing that the US should rally behind the Turkish opposition, drew a huge backlash in Ankara, which denounced the remark as meddling in its internal affairs.

The clip, which was filmed in December for a January episode of the New York Times’ documentary series The Weekly, began making waves on social media on Thursday, after it was picked up by Kurdish journalist Arif Zêrevan.

In the video Biden says that the US, presumably under his presidency, should “make it clear” that “we support opposition leadership.”

I’m still of the view that if we were to engage [with the opposition] more directly like I was doing with them, that we can support those elements of the Turkish leadership that still exist and get more from them and embolden them to be able to take on and defeat Erdogan

Biden added that he does not want to see Erdogan toppled in a coup, but rather ousted through the “electoral process.”

While airing his grievances at the Erdogan government, Biden specifically mentioned Ankara’s refusal to cave into Washington’s pressure and tear down the deal to buy Russian-made S-400 air defense systems. The Turkish military received its first S-400 shipment last year, and confirmed in June that it had “agreed in principle” with Moscow on the second delivery.

ALSO ON RT.COM‘We bought it to use it, full stop’: Turkey awaits MORE S-400s as it activates 1st of its new systems, defense industry chief saysAlthough Washnigton retaliated by suspending Turkey from the list of contributors to the F-35 program and threatened sanctions, Biden said that it was not enough.

“In fact, if he has the air defense system that they’re flying F-15s through to see how they can try to figure out how to do it,” he added.

The video, which is part of The NYT’s extensive interview with Biden and which transcript was published back in January,  has sparked a ruckus in the Turkish-speaking part of Twittersphere, sending Biden’s name trending.

While the remarks were made when Biden had not yet become the presumptive Democratic nominee, spokesman for the Turkish President  minced no words, ripping into the former VP for what he said he hoped would be denounced by Washington as “undiplomatic remarks unseemly of a presidential candidate” and a NATO ally.

“US Presidential candidate Joe Biden’s remarks (made in December but reported by the media today) reflect the games being played over Turkey and their interventionist attitudes,” Fahrettin Altun tweeted.

US Presidential candidate Joe Biden’s remarks (made in December but reported by the media today) reflect the games being played over Turkey and their interventionist attitudes. These remarks are not in line with democracy and the nature of Turkish-American relations.

While Trump has yet to comment on the controversy, commentators on Twitter wasted no time in taking Biden to task.

“He expresses a clear intention, if president, to work to unseat Erdogan. That is unwise, a policy destined to bring about instability and conflict,”  Michael Doran, Senior Fellow at Hudson Institute, tweeted.

Biden on Turkey. Not clear when and where this was filmed. He expresses a clear intention, if president, to work to unseat Erdogan. That is unwise, a policy destined to bring about instability and conflict. This is what passes for statemanship? pic.twitter.com/Tto8npyqCH

Others noted that what Biden suggested doing in Turkey is a clear-cut example of election meddling, calling out hypocrisy by Democrats.

“You cannot complain about “Russian interference with US elections” and promise to do the same in a NATO ally country,” Umut Acar, former Turkish Consul General to Chicago, said.

Biden’s words are problematic for so many reasons but let me put it in a way that “liberal progressive Americans” can understand. You cannot complain about “Russian interference with US elections” and promise to do the same in a NATO ally country. pic.twitter.com/tqPhZnQPXA

Biden could not have done Erdogan a bigger favor (and Turkey’s opposition a bigger disservice) than this nonsense pic.twitter.com/e3afFXppPv