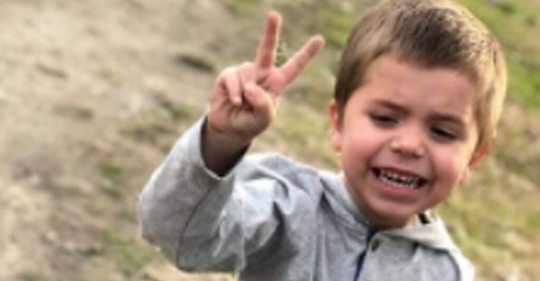 A vigil planned for Friday was postponed at the family’s request because they wanted more private time to heal, a report said

Members of the public who were shocked by the shooting death of a 5-year-old North Carolina boy last weekend have contributed more than $560,000 to the child’s family in less than a week, according to a report.

Young Cannon Hinnant died after being fatally shot in the head Sunday afternoon while riding his bicycle in Wilson, N.C., authorities have said. A neighbor, Darrius Sessoms, 25, was arrested Monday and charged with murder in the case, they said.

The shooting has mystified the family because Cannon’s father, Austin Hinnant, says he was friendly with the suspect and even checked on Sessoms’ elderly parents, the News & Observer of Raleigh reported.

“I have no idea why he did what he did,” the father said about the suspect. “It was literally out of nowhere. He puts a gun to my son’s head and shoots him.”

It was the father who ran to Cannon’s aid after the gunfire but it was too late, the newspaper reported.

Although Sessoms is Black and the Hinnant family is White, Austin Hinnant said he detected no race-related disputes in their relationship, the Wilson Times reported.

Sessoms’ parents, Garland and Carolyn, claimed their son “was not himself” Sunday and that drug-related hallucinations may have led to the shooting, the Times reported. Police have not provided a suspected motive in the case.

On Wednesday, Cannon’s grandmother, Gwen Hinnant, launched a crowdsourcing page for the family that as of early Saturday had attracted pledges of support from nearly 16,000 donors.

The page had an initial goal of $5,000 but has far exceeded that target.

“This family has faced unimaginable pain because of this senseless act of violence,” Gwen Hinnant wrote in a message on the page. She claimed young Cannon was bothering no one, just “doing what he would do any other day.”

“Just a kid trying to have fun in his own yard and something like this happens. It’s despicable,” Merrill Race, the boy’s great grandfather, told the station.

Hundreds of people turned out Thursday at a funeral home in Wilson to mourn with Cannon’s family – but a community vigil planned for Friday evening was postponed at the family’s request because they wanted more private time to heal, WNCN reported.

A gathering of some kind may be scheduled in about two weeks, the report said.

Despite the cancellation, dozens of people gathered anyway outside the Wilson County Courthouse, according to WNCN.

“I don’t know the family but I want to say to the family that we love you,” a local pastor told a reporter. “We’re praying for you and we’re standing with you.”

Other attendees traveled from as far as Greenville and Raleigh to be there, the report said.

Cannon was buried Friday morning after the Thursday funeral home gathering, according to the station.

Wilson is a city of about 49,000 residents along Interstate 95, which runs north and south. Raleigh lies about 50 miles west along Highway 264 and Greenville lies about 36 miles east.