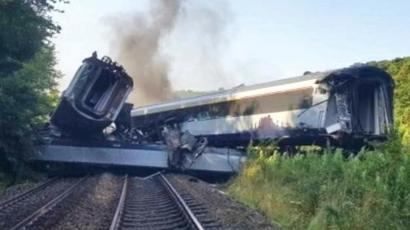 Three people, including the driver, have died after a passenger train derailed in Aberdeenshire.

The train conductor was also among those killed in the incident near Stonehaven, according to the RMT union.

Six people have been taken to hospital, although their injuries are not believed to be serious.

It is thought the train hit a landslide after heavy rain and thunderstorms which caused flooding and travel disruption across Scotland.

A major incident was declared and about 30 emergency service vehicles were called to the scene.

It involved the 06:38 ScotRail service from Aberdeen to Glasgow Queen Street.

British Transport Police said the driver’s family had been informed and were being supported by specially-trained liaison officers.