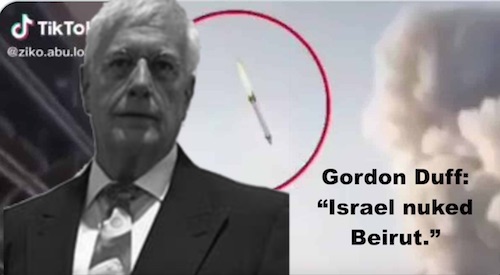 Countdown until YouTube kills the video, which is a briefing to a Middle Eastern government

Scroll down for a technical breakdown of why Beirut’s fertilizer problem is unsupportable unless there was a fueling station there was well:

“Who nuked Beirut?” That’s an obvious question to anyone who knows their mushroom clouds and can see through the fertilizer/fireworks cover stories. And it’s also the theme of this week’s False Flag Weekly News with J. Michael Springman, and of Friday night’s interview with VT Senior Editor Gordon Duff.

Those who wish to explore the topic in more detail should read Gordon’s articles, as well as Taxi’s “The US, Israel, and Beirutshima,” Pepe Escobar’s “Who Profits from the Beirut Blast?”  Richard Silverstein’s articles relying on Israeli sources, and listen to my discussion with Professor Tony Hall.

Terrorists who mass murder civilians—like the American terrorists behind Hiroshima and Nagasaki (as well as Dresden and Tokyo) and the presumed Israeli terrorists behind the Beirut disaster—typically offer an “ends justify the means” defense. They often use mathematics to support their assertions that mass murder is OK: Nuking cities full of civilians is fine because we “only” killed half a million people to end the war, while millions would have died in an invasion. As for the Israelis, their mathematical genius shows them that Jewish life has a value approximating to infinity, while non-Jewish life has a value approximating to zero.  So mass murdering the goyim, especially Arabs and Muslims (whose lives they suspect of actually having a negative value) adds up to “fully kosher.”

This week’s FFWN cited an article on Hiroshima pointing out that even if murder saves more lives than it costs—a dubious assertion in cases like Hiroshima and Beirut—it is still murder. As philosopher Gertrude Anscombe wrote:

“Come now: if you had to choose between boiling one baby and letting some frightful disaster befall a thousand people—or a million people, if a thousand is not enough—what would you do? For men to choose to kill the innocent as a means to their ends is always murder.”

I will leave it to my readers to figure out how this applies (or doesn’t) to the medical maxim “first do no harm,” and to the philosophical problem posed by vaccinations that can ruin and/or end some lives in hopes of enhancing and extending a larger number of others.

In December of 1956 Melvin Cook’s invented a new blasting agent using an unusual mixture of ammonium nitrate, aluminum powder, and water. The safety and efficiency of this new explosive were apparent, and the use of water was revolutionary. Tests that followed resulted in the development of a new field of explosives: slurry explosives. This invention converted the commercial explosives industry from “dangerous dynamite” to “safe slurry” and dry blasting agents. In 1972 Cook developed the BLU-82, the largest and most powerful chemical bomb, using aluminized slurry.

ANFO[20] (or AN/FO, for ammonium nitrate / fuel oil) is a widely used explosive mixture. The oil used is most often No. 2 fuel oil, or diesel fuel, but sometimes kerosene, coal dust, or even molasses.

ANFO under most conditions is considered a high explosive; it decomposes through detonation rather than deflagration and with a high velocity. It is a tertiary explosive consisting of distinct fuel and oxidizer phases and requires confinement for efficient detonation and brisance. Its sensitivity is relatively low; it generally requires a booster (e.g., one or two sticks of dynamite, as historically used, or, in more recent times, Tovex) to ensure reliable detonation. The explosive efficiency associated with ANFO is approximately 80% of TNT, also stated as TNT equivalency. The most efficient mixed AN explosives using fuels other than fuel oil can exceed TNT equivalency.

The basic chemistry of ANFO detonation is the reaction of ammonium nitrate (NH4NO3) with a long chain hydrocarbon (CnH2n+2) to form nitrogen, carbon dioxide and water. In an ideal stechiometrically balanced reaction, ANFO is composed of approximately 94.3% AN and 5.7% FO by weight.

Uniform mixing of oil and ammonium nitrate is essential to development of full explosive force. Some blasting agents are premixed and packaged by the manufacturer. Where not premixed, several methods of mixing in the field can be employed to achieve uniformity.
As in other combustion reactions, a deficiency of oxygen favors the formation of carbon monoxide and unburned organic compounds and produces little, if any, nitrogen oxides.

An excess of oxygen causes more nitrogen oxides and less carbon monoxide and other unburned organics. For ammonium nitrate and fuel oil (ANFO) mixtures, a fuel oil content of more than 5.5 percent creates a deficiency of oxygen.The simple removal of a tree stump might be done with a 2-step train made up of an electric blasting cap and a stick of dynamite. The detonation wave from the blasting cap would cause detonation of the dynamite.

To make a large hole in the earth, an inexpensive explosive such as ANFO might be used. In this case, the detonation wave from the blasting cap is not powerful enough to cause detonation, so a booster must be used in a 3- or 4-step train. The yield from the blasting caps and safety fuses used in these trains are usually small compared to those from the main charge, because the yields are roughly proportional to the weight of explosive used, and the main charge makes up most of the total weight.

Advantages of insensitive dry blasting agents are their safety, ease of loading, and low price. Ammonium nitrate is water soluble so that in wet holes, some blasters pump the water from the hole, insert a plastic sleeve, and load the blasting agent into the sleeve.
*
Special precautions should be taken to avoid a possible building up of static electrical charge, particularly when loading pneumatically. When properly oxygen- balanced, the fume qualities of dry blasting agents permit their use underground. Canned blasting agents, once widely used, have unlimited water resistance, but lack advantages of loading ease and direct coupling to the borehole.

BIOGRAPHY
Kevin Barrett
Dr. Kevin Barrett, a Ph.D. Arabist-Islamologist, is one of America’s best-known critics of the War on Terror.

He is host of TRUTH JIHAD RADIO; a hard driving weekly radio show funded by listener donations at Patreon.com and FALSE FLAG WEEKLY NEWS (FFWN); a audio-video show produced by Tony Hall, Allan Reese, and Kevin himself. FFWN is funded through FundRazr.

He also has appeared many times on Fox, CNN, PBS and other broadcast outlets, and has inspired feature stories and op-eds in the New York Times, the Christian Science Monitor, the Chicago Tribune, and other leading publications.

Dr. Barrett has taught at colleges and universities in San Francisco, Paris, and Wisconsin; where he ran for Congress in 2008. He currently works as a nonprofit organizer, author, and talk radio host.