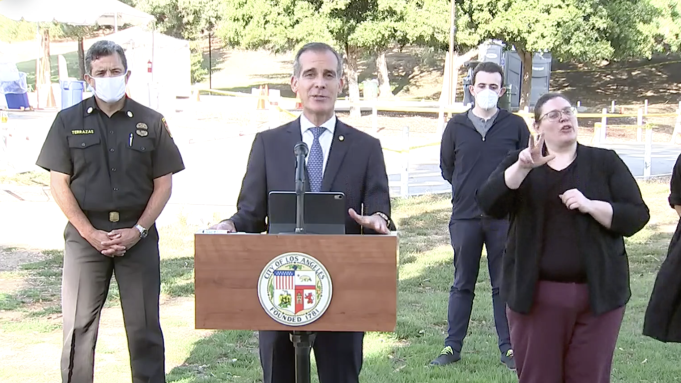 Los Angeles Mayor Eric Garcetti on Wednesday announced the city was taking action against those who throw large parties.

He called recent gatherings of mostly young people in the Hollywood Hills and Calabasas “flagrant violations of health orders.”

“While we have already closed all bars and nightclubs, these large house parties have essentially become nightclubs,” said the mayor. He then indicated he would hold them to similar scrutiny. “The same thing we would do with businesses,” said Garcetti.

If the LAPD responds to repeated complaints and verifies that there have been violations at a home, the city will within 48 hours have the DWP shut off service at that home. Garcetti also indicated that county health inspectors and other city representatives would be on the lookout for violations.

Asked about the legal standing for his action Garcetti said, “You’re breaking the law. Just as we can shut down bars breaking alcohol laws,” he said, “in places that are in criminal violations, we can shut them down.”

He said that city legal experts had vetted the measure and found it to be on firm legal ground.

“We can actually do the power or water shutoff after a first violation,” said the mayor, “but we like to educate, not enforce,” .

“We will not act lightly,” Garcetti said, “But we will act.”

Earlier in the day, the director of the Los Angeles County Department of Public Health warned that the large parties seen of late were not only dangerous, but also now illegal.

“These parties and gatherings hurt all of us,” said L.A. County Director of Public Health Barbara Ferrer. “We ask that everyone make good decisions. Don’t host large parties and don’t attend one if you’re invited.”

She then went on to say that gatherings such as the one in Beverly Crest on Monday night are against the health officer’s order, and not allowed. “You can’t have parties right now.”

“Gatherings are simply not allowed at this point under the health officer order,” Ferrer said. “Because they create a lot of risk for transmission at activities that really are not essential.”

The Department of Public Health said in a statement that it “has issued a legally binding health officer order” that bans gatherings, including parties, during the coronavirus pandemic.

The order aims to “protect the health and lives of county residents,” the department said. Violation of the order could mean a fine, jail or both.

“We urge every resident in Los Angeles County to follow the health officer order and avoid organizing and attending gatherings that include people outside their own household,” the statement said.

The region saw 2,347 new cases of COVID-19. “This is likely to be an undercount,” said Ferrer, due to the recently revealed state data glitch impacting new cases. The total number of cases in the county to date is reported at 197,912.

The virus currently has 1,768 in the hospital, 30 percent of whom are on ventilators.