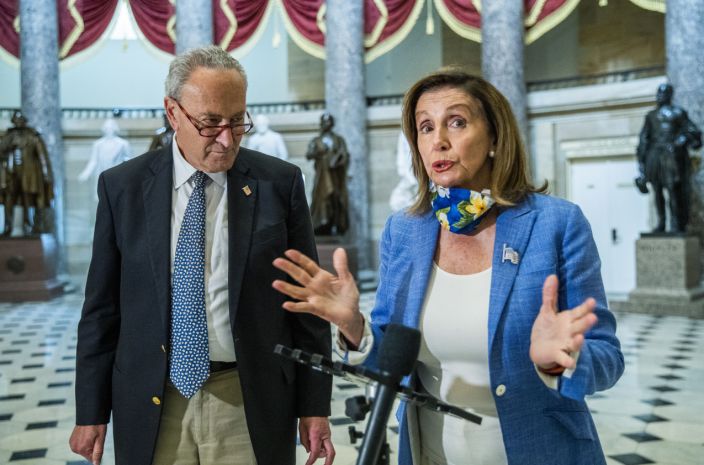 On March 27, President Trump signed the Coronavirus Aid, Relief, and Economic Security Act into law. The CARES Act included a number of measures meant to support Americans whose livelihoods were affected by the pandemic, including a one-time $1,200 stimulus check for many Americans, $600 per week in enhanced unemployment benefits and eviction protections for tenants who lived in housing with federally backed mortgages.

The expanded unemployment that was keeping 30 million Americans — disproportionately women and minorities — afloat expired at the end of July, meaning things will quickly get worse for those who were already in danger of being unable to afford food and housing. The downstream effects are likely to be felt throughout the economy, which already posted its worst decline in history in the second quarter. How did the federal government fail to extend the benefits, despite their popularity in public polling?

In May, Democrats in the House passed the Health and Economic Recovery Omnibus Emergency Solutions (HEROES) Act. It included another round of stimulus checks and an extension of the enhanced unemployment at a rate of $600 per week through January 2021. The act also suspended interest payments on federally backed student loans, provided rental and mortgage assistance, and allowed hazard pay for essential workers. It also provided funding for the U.S. Postal Service, for local and state governments that have seen their tax revenues depleted with the slowed economy, for election planning and security, and for COVID-19 testing and tracing.

President Trump immediately dismissed the legislation, and was particularly scornful of the funding for mail-in ballots, which he has denounced (without evidence) as a source of fraud.

“DOA,” Trump said at the time. “Dead on arrival. Of course, Nancy Pelosi knows that.”

In the two and a half months following those comments, the discussions between Senate Republicans and the White House haven’t resulted in a plan, even as the pandemic began to worsen across many areas of the country beginning in late June.

“Unemployment is extremely important. And we need to make sure, for those who are not able to recover their jobs, unemployment is adequate,” McConnell told reporters. “That is a different issue from whether we ought to pay people a bonus not to go back to work. And so I think that was a mistake.”

McConnell is among many Republican senators and conservative commentators who claim that expanded unemployment benefits, in some cases exceeding workers’ wages, discourage people from returning to their jobs. A study by Yale economists released last month found no evidence to support that idea. “We find that the workers who experienced larger increases in UI generosity did not experience larger declines in employment when the benefits expansion went into effect,” reads the study. “Additionally, we find that workers facing larger expansions in UI benefits have returned to their previous jobs over time at similar rates as others. We find no evidence that more generous benefits disincentivized work either at the onset of the expansion or as firms looked to return to business over time.”

Unemployment is generally a problem of not enough jobs, not lazy workers. In May, there were roughly four unemployed Americans for every open job.

A collateral benefit of expanded insurance is that workers aren’t forced back into jobs where conditions may be unsafe during the pandemic. McConnell insisted on including a liability shield that would protect employers, schools and hospitals from COVID-19-related claims, but last week the Washington Post reported that the White House was willing to make a deal without those provisions.

“That’s a question for Mitch McConnell. … That’s his priority,” White House press secretary Kayleigh McEnany said Friday when asked if the administration would insist on a liability shield.

“This president is very keenly focused on unemployment insurance,” she added, although in May Trump was against extending the unemployment benefits because he thought it was hurting the economic recovery.

Last Monday, Senate Republicans proposed their own bill that dropped the weekly benefit to $200, with the intention to transition the amount to 70 percent of the recipient’s regular wages. The measure also included $1.8 billion for a new FBI building and more than $1 billion to purchase military aircraft. Trump, who has dropped his request for a payroll tax cut after GOP objections, called the bill “sort of semi-irrelevant.” It has met opposition from members of the GOP caucus who don’t want to see any additional money spent.

House Majority Leader Steny Hoyer said last week that Democrats could be flexible on the $600-per-week benefit, but other members of the caucus, including Pelosi, are holding firm on the demand.

“We have been for the $600,” Pelosi said Sunday in an interview with ABC News. “They [Republicans] have a $200 proposal, which does not meet the needs of America’s working families. And it’s a condescension, quite frankly, because they’re saying, really don’t need it; they’re just staying home because they make more money at $600.”

“We had a long discussion, and we just don’t think they understand the gravity of the problem,” Senate Minority Leader Chuck Schumer told reporters after the meeting.

The Democrats’ rejection of the one-week extension gave Republicans an opening to blame the other party for allowing the benefits to expire. The charge is belied by the fact that the House passed its broader extension bill months earlier.

“Very disappointed in [Schumer] for blocking the temporary extension of the $600 unemployment benefits. The Do Nothing Democrats are more interested in playing politics than in helping our deserving people,” Trump tweeted.

While negotiations on Capitol Hill continue, the Washington Post reported Monday morning that the White House is considering taking unilateral action, the details of which are unclear. Even if the benefits are extended soon, it may take weeks before most Americans start receiving them.