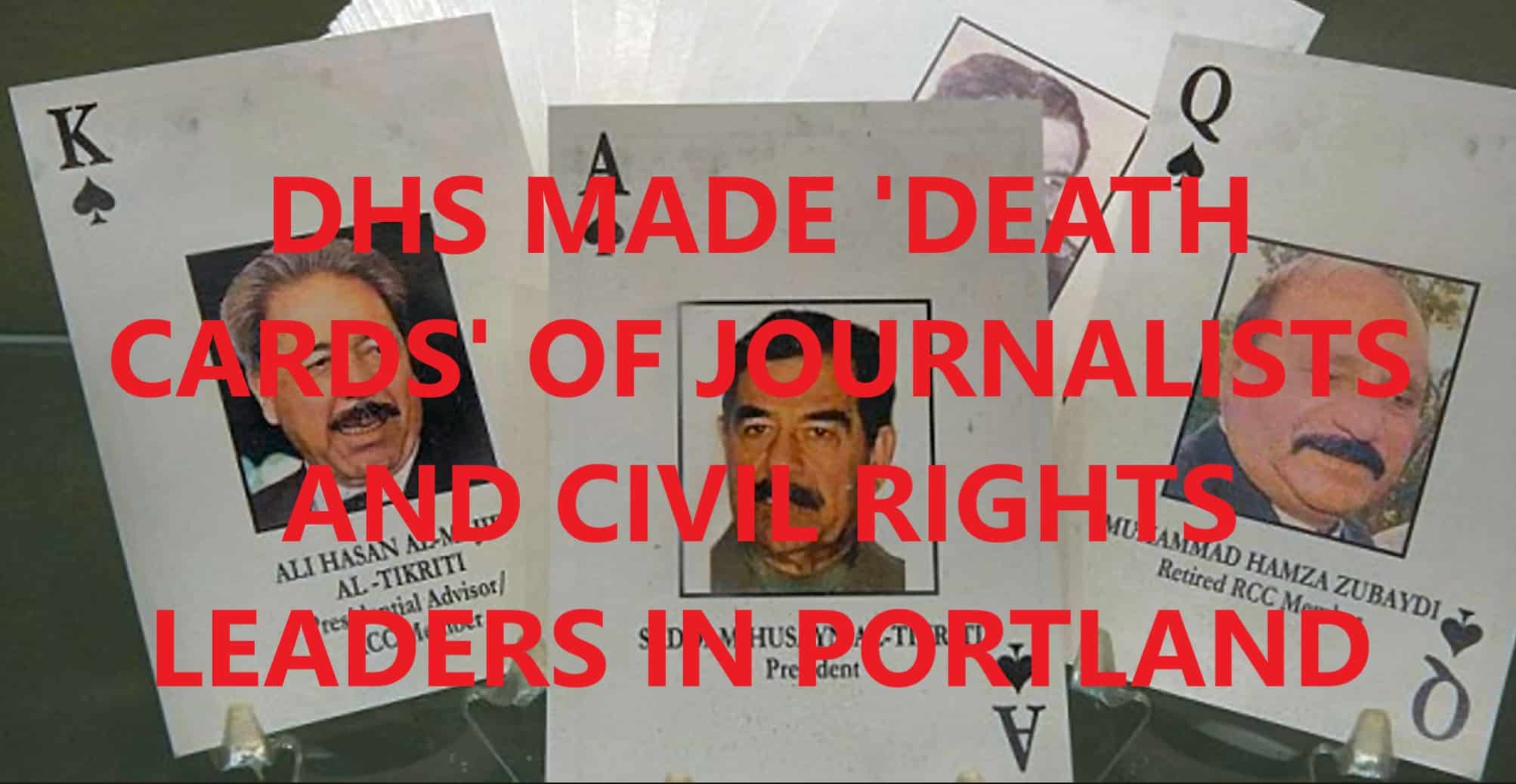 After months of protests demanding the defunding of police, the abduction of protesters turns the focus to Homeland Security.

VT: In this detailed report, the case is made for dismantling the DHS monstrosity left over from 9/11, when America was hoodwinked into sacrificing its freedoms and values for fascism.

DHS under Mossadist Chad Wolf made up ‘Death Cards’ like were used in Iraq, but this time featuring journalists, including those from the Washington Post and NY Times, civil rights leaders, religious leaders, local political activists and those suspected of being “violent opportunists,” who we found were either Portland police officers or their friends and family members.

We then went to sources in the DOJ who confirmed that both Homeland Security and the Portland Police are currently under investigation for staging violence during the peaceful protests.

“Duff, this was staged violence by organizations with the most to gain, overpoliticized police and the DHS”
We will prove below that the DHS under Israeli operative and former DC lobbyists Chad Wolf falsified memos given to congress by former FBI Agent Brian Murphy.

DHS created ‘Death Cards’ like used by US Army in Iraq, featuring photos of journalists and civil rights leaders  Fake memos were created:

and then one that turned fake “violent opportunists” to “Antifa” an organization that no proof exists is tied to violence in Portland.  From The Intercept, an excellent and long read:

The Intercept: IN HIS FORMAL PROPOSAL to create the Department of Homeland Security, in the aftermath of the 9/11 attacks, President George W. Bush wrote that “the changing nature of the threats facing America requires a new government structure to protect against invisible enemies that can strike with a wide variety of weapons.”

The Bush administration wanted a new agency to oversee everything from border security to emergency preparedness and response — “the most significant transformation of the U.S. government in over a half-century,” the document noted.

DHS oversees two dozen subagencies and offices and has an annual budget of $50 billion. Since its founding, in 2002, the department has run agencies as different in scope as the Transportation Security Administration and the Federal Emergency Management Agency, while also largely replicating, through dozens of regional law enforcement hubs known as fusion centers, the counterterrorism mission that premised its founding but remains the primary responsibility of other agencies.

And yet the invisible enemy Bush feared arrived nonetheless. Every two to three days, the coronavirus is killing the number of Americans who died on September 11. Since the beginning of the pandemic, the virus has killed 50 times as many.

Criticism of DHS has accompanied the department through its existence, most recently when former Homeland Security Secretary Kirstjen Nielsen became the face of the Trump administration’s brutal policy of separating children from their parents at the southern border.

Calls to abolish U.S. Immigration and Customs Enforcement — one of DHS’s most visible and abusive agencies — have echoed from street protests to the halls of Congress and the 2020 presidential primary.

Then earlier this month, as President Donald Trump deployed DHS troops, primarily from U.S. Customs and Border Protection, against protesters rallying against police violence in Portland, Oregon, he once again trained the spotlight on the troubled department.

The unidentified agents abducting people in unmarked rental cars raised questions about what the Border Patrol was doing on the streets of an American city and awareness about the impunity with which it operates elsewhere. And their presence stoked calls to not only abolish ICE or CBP, but also to dismantle their parent agency altogether…read more