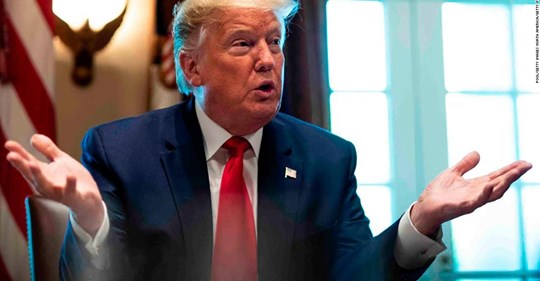 On Thursday morning, Trump suggested delaying the November election because the pandemic complicates the voting process. For the record, Trump has no authority to do that.

Beyond that, every preceding wartime president, facing the significant challenge of holding an election in the middle of a war (whether against another nation or a virus) has never backed down.
In 1864, President Abraham Lincoln was in the midst of the Civil War, at the helm of a nation at war with itself. He was confronted by the challenging logistics of holding an election with soldiers on the battlefields and dimming hopes for his own reelection, which prompted advisers to suggest a delay.
But it happened as scheduled….
Read more here >> https://www.cnn.com/2020/07/30/politics/2020-election-delay-trump-civil-war-wwii-trnd/index.html?utm_content=2020-07-31T04%3A29%3A03&utm_medium=social&utm_source=fbCNN&utm_term=link&fbclid=IwAR1D9dZgTH25qGl96fhGnZUMWe0cRQzzbC9cn7FzPTEqKuoyNWGg8i4QA5M
UrlPreviewBox
Share 0 FacebookTwitterPinterestLinkedinEmail
previous post