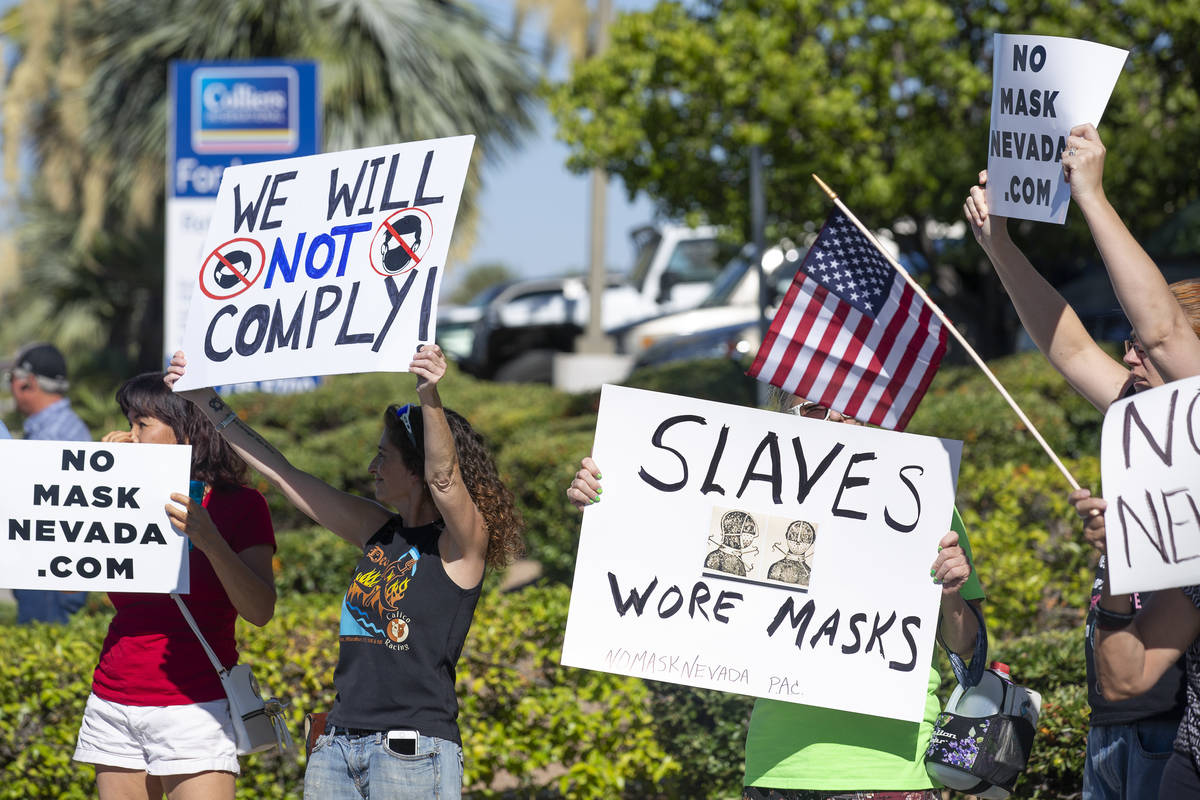 Muello brought an American flag with her, which she said was her attempt to remind fellow protesters of their right to assemble under the First Amendment.

Ann Sorensen, 64, of southwest Las Vegas, came with her husband and said this was her first protest because she felt determined to change the mandate.

“Why do I want them to step on my freedom?” she said. “I come from a Third World country, and I came here for my freedom.”

At the edge of the group lining the sidewalk, 8-year-old Therese Guthrie sat on her father’s shoulders holding a sign. Her four siblings, Elizabeth, 8, Gianna, 4, Holly, 9 and Christabel, 14, and her mother, Graciela, 47, stood around her. James Guthrie said he brought his children to teach them to stand up for what they felt was wrong.

“We have a right to assemble for a peaceful protest when we don’t feel a law is right,” he said.

Christabel Guthrie said she thinks a mask mandate is an overreaction to the number of cases, hospitalizations and deaths.

“We think people should be able to make their own choice,” she said. “Other people are bullying them into it, and it’s peer pressure. Not a lot of people have died.”

As of Wednesday, 553 COVID-19-related deaths had been recorded in the state since the first case in Nevada was reported in early March. The state’s first death was reported March 16.

The group was also protesting Henderson Assemblywoman Lesley Cohen, who will be up for re-election in November. A statement from the PAC called Cohen a “fierce pro-mask mandate candidate.”

Paul Kendall, 73, of southeast Las Vegas, said he’s frustrated because he believes politicians who are paid by taxpayers don’t listen to constituents about the pandemic.

“We have no platforms to discuss on a rational basis and no leadership to engage us,” he said.