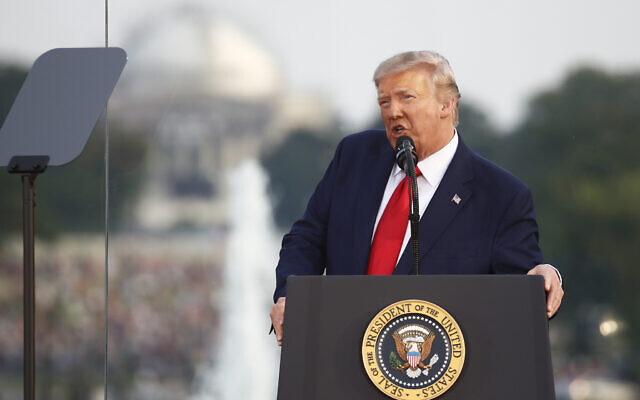 US President Donald Trump speaks during a ‘Salute to America’ event on the South Lawn of the White House, in Washington, July 4, 2020. (o/Patrick Semansky/AP)

At White House Independence Day event, president says country will have a vaccine before the end of the year

By TOI STAFF and AGENCIESToday, 4:04 pm

US President Donald Trump on Saturday claimed that almost all coronavirus cases in America are harmless and that the country will likely produce a vaccine by the end of the year.

Trump addressed guests during a “Salute to America” jamboree held on the south lawn of the White House to mark US Independence Day. He greeted his audience of front-line medical workers and others central in responding to the coronavirus pandemic, and opened up on those who “slander” him and disrespect the country’s past.

So far some 2.8 million people in the US have been infected with the coronavirus and 130,000 have died. The infection rate has reached over 50,000 new cases a day.

The president repeated his claim that the high number of cases found is a result of a high test rate among the population.

“Now we have tested almost 40 million people,” Trump said. “By so doing, we show cases, 99% of which are totally harmless. Results that no other country can show because no other country has the testing that we have, not in terms of the numbers or in terms of quality.”

A pedestrian, wearing a mask to prevent the spread of the new coronavirus, walks down Miami Beach, Florida’s famed Ocean Drive on South Beach, July 4, 2020. The Fourth of July holiday weekend began Saturday with some sobering numbers in the Sunshine State: Florida logged a record number of people testing positive for the coronavirus. (AP Photo/Wilfredo Lee)

“We’ve made a lot of progress,” he said. “Our strategy is moving along well. It goes out in one area, it rears back its ugly face in another area. But we’ve learned a lot. We’ve learned how to put out the flame.”

“We’ll likely have a therapeutic and/or vaccine solution long before the end of the year,” he predicted.

“We got hit by the virus that came from China,” Trump said. “China’s secrecy, deceptions and cover up allowed it to spread all over the world, 189 countries. And China must be held fully accountable.”

He did not say what measures the US might take against China.

Guests wait for President Donald Trump and first lady Melania Trump during a “Salute to America” event on the South Lawn of the White House, Saturday, July 4, 2020, in Washington. (AP Photo/Patrick Semansky)

Trump used the occasion to lash out at violence across the country that came amid anti-racism protests sparked by the killing of a Black man while in police custody.

Protesters, he said, “are not interested in justice or in healing. Their goal is demolition.”

He opened up on those who “slander” him and disrespect the country’s past.

“The more you lie, the more you slander, the more you try to demean and divide, the more we will work hard to tell the truth and we will win,” Trump said, with four months to go until the November presidential election.

Carrying on a theme he pounded on a day earlier against the backdrop of the Mount Rushmore monuments, he went after those who have torn down statues or think some of them, particularly those of Confederate figures, should be removed. Support has been growing among Republicans to remove Confederate memorials.

“Our past is not a burden to be cast away,” Trump said.

President Donald Trump and first lady Melania Trump watch as a 21-gun salute by the Presidential Salute Battery, 3d U.S. Infantry Regiment (The Old Guard), is fired by canons on the Ellispe during a “Salute to America” event on the South Lawn of the White House, Saturday, July 4, 2020, in Washington. (AP Photo/Alex Brandon)

“We are now in the process of defeating the radical left, the anarchists, the agitators, the looters, and the people who, in many instances, have absolutely no clue what they are doing,” he said. “We will never allow an angry mob to tear down our statues, erase our history, indoctrinate our children.

“We will not throw away our heroes. We will honor them and we will prove worthy of their sacrifice,” Trump continued. “The patriots who built our country were not villains. They were heroes.”

Trump’s guests on the South Lawn were doctors, nurses, law enforcement officers and military members as well as officials from the administration, said Judd Deere, deputy White House press secretary. He said the event was a tribute to the “tremendous courage and spirit” of front-line workers and the public in the pandemic.

In many parts of the country, authorities discouraged mass gatherings for the holiday after days that have seen COVID-19 cases grow at a rate not experienced even during the deadliest phase of the pandemic in the spring.