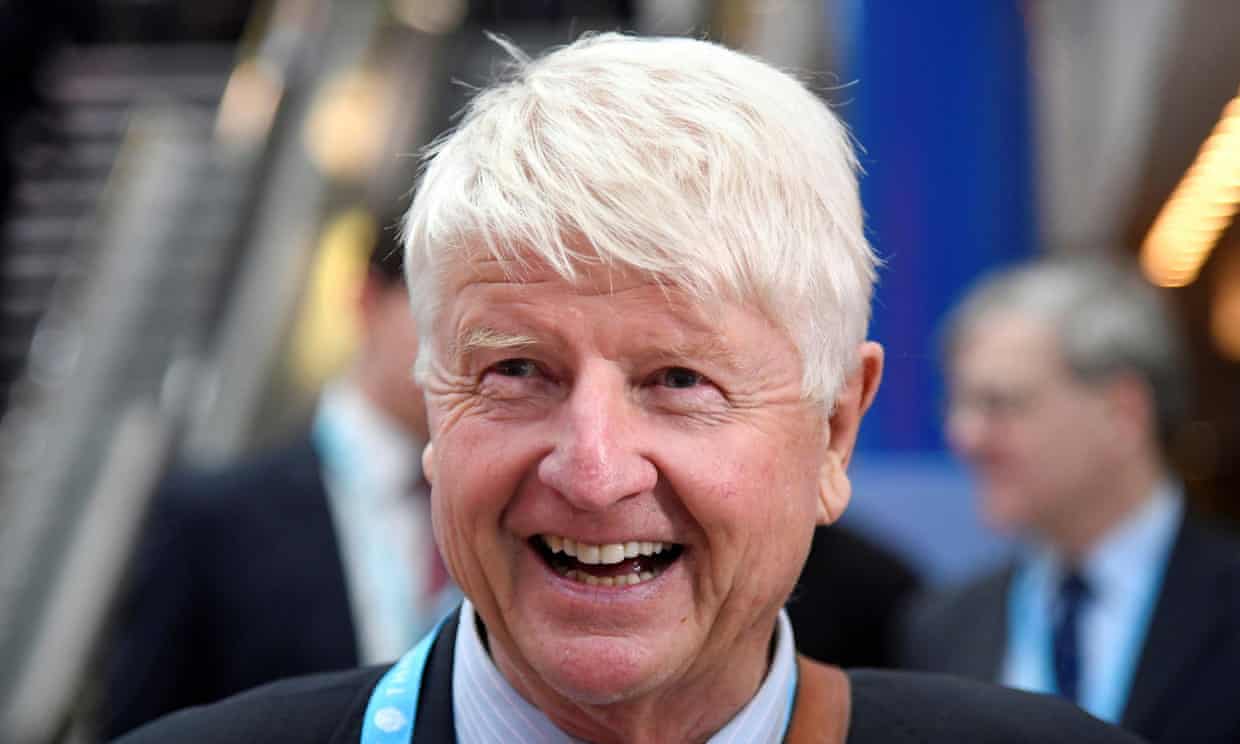 Stanley Johnson says visit to Greece is necessary to set up physical distancing measures at the villa he rents out. Photograph: Toby Melville/Reuters

GreekNewsOnDemand.com comments: Both Boris Johnson and his father, Stanley, know the “coronavirus” is…FAKE, thus there “eroding” of the guidelines. WAKE UP, WORLD!!!

The decision by the prime minister’s father to travel to his Greek villa in apparent breach of Foreign Office guidance has been criticised by a government scientific adviser.

Boris Johnson has refused to condemn his father, Stanley, for flying to Greece, despite current advice for British nationals to avoid all but essential international travel.

Prof Stephen Reicher, a member of SPI-B, the Sage subcommittee providing advice from behavioural scientists to government on how the public might respond to lockdown measures, said the incident could undermine the public’s trust in government guidelines.

Reicher, previously reacted with disdain to Johnson’s defence of his senior adviser, Dominic Cummings, after his controversial visit to his parents’ home in Durham during the height of lockdown.

Of the recent episode involving the prime ministers’s father, Reicher said evidence had shown that trust is more important for compliance at this stage than it was during the lockdown.

“Erosion of trust undermines people’s willingness to use the test, trace and isolate system and in particular to give their information to the authorities,” he added.

The social psychologist at the University of St Andrews said Johnson senior’s decision to travel may have undermined the government’s message during a “volatile situation”.

“One of the best ways to undermine trust is the notion there’s one law for them and one law for us. It divides us from the authorities. There’s no doubt that this affects that perception in the same way that the Cummings affair did and therefore at the very best it’s not helpful,” he added.

Johnson senior travelled to his Greek villa via Bulgaria, in order to avoid the ban on direct flights from the UK.

However, during an LBC radio phone-in, the prime minister repeatedly refused to say whether he was “disappointed” with his father’s actions.

“I think you really ought to raise that with him. I am not going to get into details of family conversations,” he said.

Earlier this week, Johnson senior, posted a picture on social media of himself apparently arriving at Athens airport wearing a face mask. The 79-year-old told reporters that he was visiting on “essential business” because he needed to “Covid-proof my property” before the letting season. The photograph appeared to have later been removed from his Instagram account. On Friday, Greek media carried photographs of him cutting a solitary figure in his favourite seaside restaurant, a bottle of red wine by his side. The photographs were taken late on Thursday.

Greek officials, if privately dismissive of the British government’s handling of the pandemic, said Johnson senior had not broken any rules in entering the country even if he had flagrantly defied the travel advice of UK authorities. Despite Athens’ recent decision to prolong the suspension of direct air links with the UK until 15 July, Britons were still entitled to travel freely to Europe until the Brexit transition period ended, they noted.

“We have banned flights, direct flights from the UK and Sweden until 15 July. If a citizen from these countries arrives in a different way to Greece, of course they can come,” said Stelios Petsas, a government spokesman.

The former Euro MP’s sudden appearance in Greece came amid mounting exasperation in Athens over “conflicting” leaks in London about possible air bridges and quarantine periods.

“There’s a lot of eye-rolling,” confided one insider describing the reaction of the inner circle of the prime minister, Kyriakos Mitsotakis. “There are so many conflicting signs … we’re lost for words.”

Johnson senior had long planned to travel to Greece, telling one Greek journalist in May that he had already booked his air ticket. “I’m very worried that we may not be able to [go] this summer,” he told the Greek daily Ta Nea in an interview published in the spring.

“We are in this country in lockdown and even if we can leave Britain it’s not clear to me that we would yet be welcome in Greece … of course I’d love to be there, even if I had to go and self-isolate in my house I’d do that.”

The prime minister’s father has been holidaying in Greece yearly since acquiring an expansive 40-tree olive grove in Pelion, the peninsula jutting into the Aegean Sea off the coast of Thessaly, in 2001. He has also sought to capitalise on his investment.

The two-storey, four-bedroom Villa Irene is advertised on Johnson’s personal website and managed through Real Holidays, an independent travel company based in Islington, north London.

With its “spectacular views of the mountains and the sea”, the bolthole – regularly used by Boris Johnson out of season – has proved to be an equally nice earner for the family, bringing in more than £40,000 a year in rental income. Lower season for a week is £1,750 and ends on 20 June, and then it goes into peak season which is £2,100 through to 19 September.

When contacted from Athens, Real Holidays confirmed that the villa, which is let from 1 May to 30 September, was fully booked this year barring one week at the end of the season.

“It gets booked up very early, Irene, there are a lot of people who go year on year and book very far in advance,” said a travel planner at the company when asked about the villa’s availability.

She added: “It’s sold on a weekly basis. We have clients due to travel mid-July but we can’t recommend that people travel at the moment, not with the austere guidelines in place.”

Johnson explained the trip saying he had to set up “social distancing measures” at the property. No such rules apply to private properties being rented out in Greece.

The owner, she said, was “flexible”. “He is based between the UK and Greece and I can talk to him. Pelion is a stunning area and unspoilt and authentic, and there aren’t that many villas in the area. It’s got a pool, you can walk down to a little cove, a little bay, swim in the sea and as I say we always get very stunning feedback.”

Asked about Johnson, Matt Fisher, Real Holidays’ director, said: “We are not privy to speak about Stanley’s private life.”