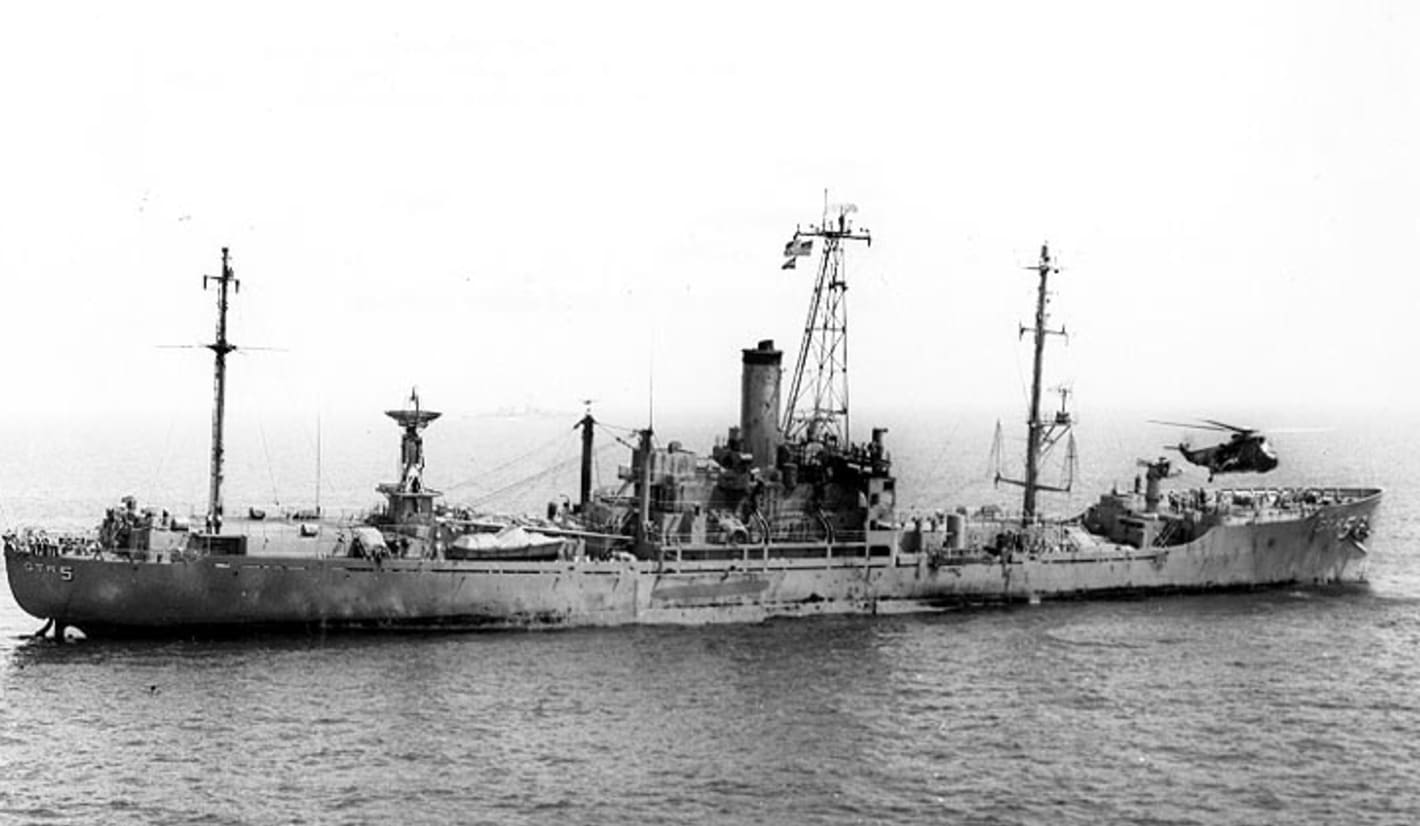 ‘The Americans have findings that show our pilots were aware the ship was American,’ a newly published document by the State Archives says

Amid the jubilee celebrations for the Six-Day War, the tragic story of the American spy ship USS Liberty – which was bombed by an Israeli fighter jet and torpedo boats on June 8, 1967 in the eastern Mediterranean – was somewhat overlooked. Thirty-four American sailors were killed in the Israeli attack and many others were wounded.

Israel apologized and paid compensation to the victims’ families. Israeli and American commissions of inquiry found that the attack was a mistake. But naturally, as often happens in such events, to this day there are some who believe Israel attacked the ship with malicious intent.

A conspiracy? Healthy suspicion? Call it what you will. A new book published in May in the United States (its authors include several survivors of the attack) promises that “the truth is being told as never before and the real story revealed.” The 302 pages of “Remember the Liberty!: Almost Sunk by Treason on the High Seas” include quite a number of documents, testimonies, arguments and information that were gathered in the subsequent 50 years.

The authors’ bottom line is that then-U.S. President Lyndon B. Johnson was behind the attack, in an attempt to blame then-Egyptian President Gamal Abdel Nasser – an excuse that would then enable the United States to join the Six-Day War.

The book includes, among other things, a CIA document from November 1967 that is still partially censored. In the document, which is also on the official CIA website, an anonymous source is quoted as saying: “They said that [then-Israeli Defense Minister Moshe] Dayan personally ordered the attack on the ship, and that one of his generals adamantly opposed the action and said, ‘This is pure murder.’” There is no dispute about the authenticity of the document, but clearly not every sentence written in an intelligence document is the unvarnished truth.

On the other hand, the new book quotes a story reported by former U.S. Ambassador to Lebanon Dwight Porter, who recounted a conversation between an Israeli pilot and the Israel Air Force war room, which was allegedly picked up by an NSA aircraft and inadvertently cabled to CIA offices around the world:

Israeli pilot to IDF war room: This is an American ship. Do you still want us to attack?

Israeli pilot to IDF war room: But sir, it’s an American ship – I can see the flag!

Both the CIA document and the quote have already been published in the past. The book revives them as part of its attempt to prove its thesis.

Haaretz asked Oren last week if he has any doubts about his assertion that Israel didn’t deliberately attack the spy ship.

“There is no doubt,” he says. “Not even the smallest percentage. I’ve taken part in wars. I know what ‘friendly fire’ is. There’s a lot of chaos. It was a classic screw up.

A classic screw up, especially in wartime, has more than one reason. It’s a sequence, a chain of screw ups.”

Oren adds: “I’m a historian. I have to stick with the facts. I can’t get into conspiracies and theories. A historian must proceed on the basis of the data before him. Today, almost all the papers have been publicized, including the texts of the recordings of the U.S. spy plane and spy submarine.

“Attempts to explain why Israel was interested in attacking the Liberty have failed thus far,” he continues. “They’re trying to answer the question ‘Why?’ and they’re having difficulty. It began with the claim that the Liberty discovered the Israel Defense Forces’ intentions or preparations to occupy the Golan Heights. And then they said it had homed in on some preparations in Dimona [the site of Israel’s nuclear reactor]. And finally, that it had listened in on the slaughter of Egyptian prisoners of war – I don’t know how slaughter sounds on the communications network. All kinds of bizarre theories.

“If we start with the assumption that the attack was deliberate and planned in advance, the question is why. And nobody answers this question. The answer is that it wasn’t planned.

“What continues to fuel these conspiracy theories?” Oren asks. “The subject is revived every few years. It is part of a ‘theory’ that Israel, together with Russia and China, spies on the United States. As Israel’s ambassador to the United States I saw this undercurrent, which is also sometimes anti-Semitic.”

In response to a recent request by historian Adam Raz (“The Battle Over the Bomb,” 2015, Hebrew), the Israel State Archives posted hundreds of documents on its website related to the USS Liberty affair.

Raz perused the material and pulled out several fascinating documents that are likely to add more questions to those already in existence – or, if you will, provide some convincing material for conspiracy theorists.

Raz, who wrote a fascinating article about Israel’s nuclear secrets in last week’s Hebrew Haaretz supplement, doesn’t like the C-word: “conspiracy.” He stresses that, as a historian, he finds the word unacceptable. “Was the so-called ‘rotten business’ [a failed Israeli sabotage operation in Egypt in 1954] also a conspiracy? So what’s a conspiracy?” he wonders.

He believes the documents arouse enough questions to ensure historians won’t be filing the affair away in the archives. He’s fully aware of the fact that the “smoking gun” won’t be found in the papers in the State Archives, because if Israel really had intended to hit the ship, that would have been known only to a handful of people. But he refuses to accept the assertion that the claims Israel hit the ship deliberately are a conspiracy.

One of the documents Raz found among the hundreds of papers published by the State Archives is the Israeli Foreign Ministry correspondence that was sent from New York to Jerusalem.

“Menashe informed us we had better be very careful. He doesn’t have complete information but he knows that Issaschar is very angry about our letter. The reason is apparently that the Americans have findings that show our pilots were in fact aware the ship was American,” according to the document.

And later: “Menashe believes there is a recording on the ship of the conversations between the ship and our pilots, in which the ship’s crew said the ship is American. Menashe says that, in his opinion, our only chance of getting out of the crisis is to punish someone for negligence.”

In another document, which is also now posted online by the State Archives, the Israeli Embassy in Washington writes to the Foreign Ministry in Jerusalem under the heading “Urgent.”

“We must change the abovementioned letter, because we certainly won’t be able to say there is no basis for the accusation that the identity of the ship was determined by Israeli planes prior to the attack,” it declares.

In other documents, which are fascinating in themselves, there is documentation of Israeli preparations for the U.S. investigation and the demands for compensation that were to follow.

“The issue has turned into a malignant wound, which involves serious dangers for all of our relationships on all levels here, whose friendship was ours until now and which are crucial to our status in the United States. In other words, the president, the Pentagon, public opinion and the intelligence community. Do you realize that the president is also the supreme commander of the U.S. armed forces?” wonders the Israeli Embassy in Washington, in a telegram to the Foreign Ministry.

“In the grave situation that has been created, the only way to soften the result is for us to be able to announce to the U.S. government already today that we intend to prosecute people for this disaster. We have to publicize that in Israel already tonight,” according to a Foreign Ministry letter. “This activity is the only way to create the impression, both to the U.S. government and the public here, that the attack on the ship was not the result of malicious intent by the Israeli government – I repeat, the Israeli government – or authorized groups in the IDF. For obvious reasons, it is crucial that our announcement about prosecuting those who are to blame be publicized before – I repeat, before – the publication of the American report here.”

The papers also contain several “amusing” anecdotes, such as the description of a U.S. Independence Day party that was held at the U.S. Embassy in Israel after the disaster.

“I was presented to the commander of the USS Liberty, which is here for repairs. He spoke freely about what happened and expressed his full confidence that it was a tragic mistake,” according to one of the Foreign Ministry documents. “When asked in my presence, how long the ship’s trip to the United States would take, he replied with a smile, ‘About two weeks – unless we encounter Israeli planes again.’”

Much ink has been spilled in the past 50 years about the Liberty. In 2015, Amir Oren wrote a fascinating Haaretz Hebrew article that tried to eliminate all the conspiracy theories. “Senior American officials bequeathed a large number of incriminating quotes, but the plain and consensual truth is that a series of mistakes and screw ups caused the IDF to land a lethal blow against a vessel belonging to Israel’s most important ally,” he wrote.

Tom Segev, in an equally interesting 2012 article, also came out against the various theories. “None of the four people who could have ordered an attack on an American ship – Prime Minister Levi Eshkol, Mossad chief Meir Amit, Defense Minister Moshe Dayan and Chief of Staff Yitzhak Rabin – was daring and crazy to that extent,” he wrote.

However, he concludes with a slight note of doubt: “Over the years, various pieces of evidence have emerged that seem to support Israel’s claim that the ship was fired on by mistake. However, a number of questions still hover over the affair, and these nourish the conspiracy theories.”