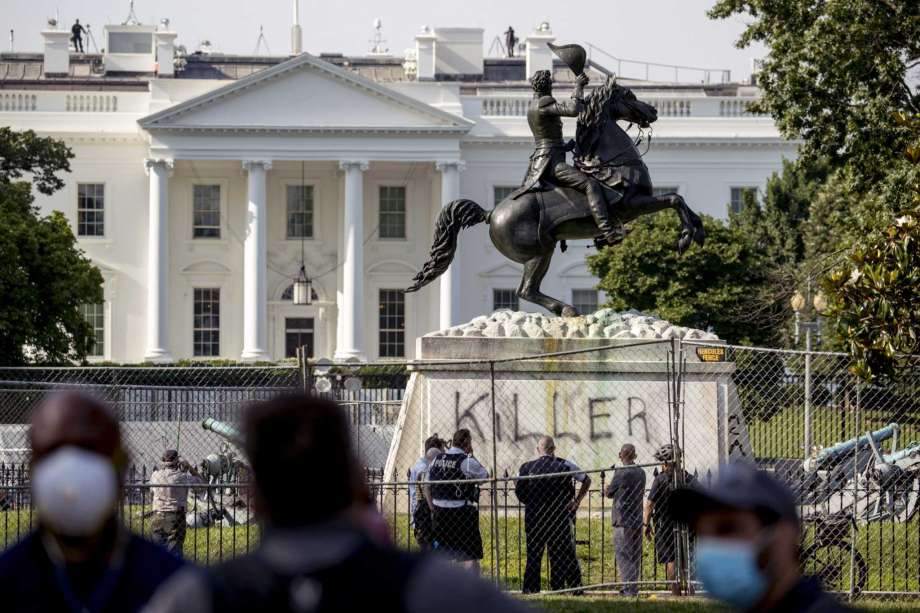 WASHINGTON – U.S. Marshals have been told they should prepare to help protect national monuments across the country, according to an email directive viewed by The Washington Post, as President Donald Trump has vowed stern punishment for those who vandalize or destroy such structures as part of police violence protests.

In an email, Marshals Assistant Director Andrew Smith wrote that the service “has been asked to immediately prepare to provide federal law enforcement support to protect national monuments (throughout the country).”

“This is a challenging assignment due to the breadth of possible targets for criminal activity,” Smith wrote. He said the Marshals Incident Management Team would start a Joint Operations Center in Springfield, Va., to coordinate, and every deputy in the Special Operations Group would be made available to help as soon as Thursday. He also asked other districts and divisions to identify people they might be able to lend to the effort until July 8.

On Monday, protesters attempted to topple a statue of President Andrew Jackson in a park next to the White House, though police in riot gear intervened and stopped them. That night, Trump tweeted his dismay, and the next morning he wrote that he had “authorized the Federal Government to arrest anyone who vandalizes or destroys any monument, statue or other such Federal property in the U.S. with up to 10 years in prison, per the Veteran’s Memorial Preservation Act, or such other laws that may be pertinent…..”

Earlier Wednesday, defense officials said that the Army activated about 400 unarmed members of the District of Columbia National Guard to “prevent any defacing or destruction” of monuments.

Across the country, protesters have toppled statues of figures from America’s sordid past – including Confederate generals – as part of demonstrations against racism and police violence. Some attempts have grown heated; in New Mexico, a man was shot and wounded in a demonstration to tear down a monument to Spanish conquistador Juan de Oñate, a 16th-century despot who massacred indigenous people. The protest grew contentious after an armed militia group showed up at the scene.

It was not immediately clear how many Marshals would be involved in the work, or what, precisely, they would be doing. The assignment is unusual, as Marshals – who come under the Department of Justice – typically work providing security for courthouses, transporting prisoners, apprehending fugitives and protecting witnesses. It was the U.S. Park Police who dispersed the demonstrators around the Jackson statue.

A spokesman for the Marshals service said Wednesday, “We don’t confirm or deny any enforcement actions that we might take.”

The Washington Post’s Alex Horton contributed to this report.