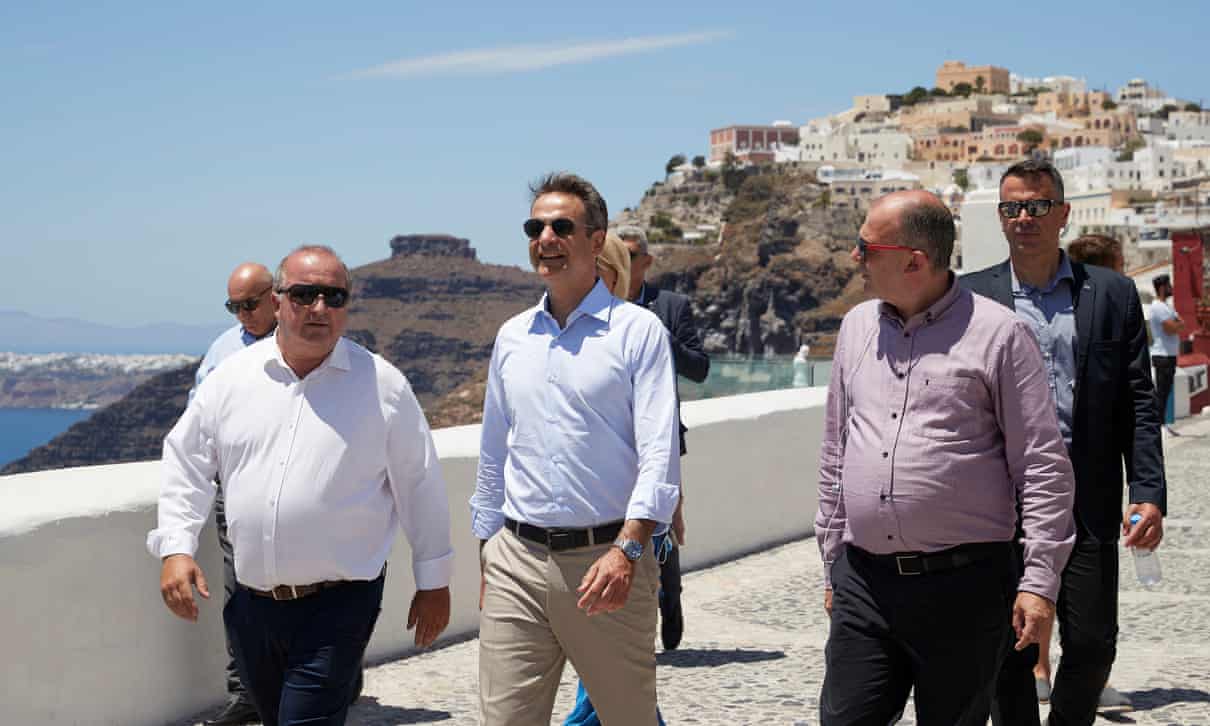 As the country reopens its borders, a series of opaque government contracts is beginning to ring alarm bells…

To the outside world, Greece has had a relatively successful experience with the Covid-19 pandemic.

In early March, the prime minister, Kyriakos Mitsotakis – of the rightwing New Democracy party – and his administration grasped the risks the virus posed to a country with a decimated public health system. They imposed a tough lockdown early, which saved lives. Greece has counted 3,121 cases and 183 deaths. And, after more than three months of relative isolation, the country has just opened its borders to tourists.

But there is another side to this apparent success story. It has also become increasingly clear that the Mitsotakis government is using the emergency as a pretext to rush through highly opaque and questionable public-finance deals. A series of revelations have dented the government’s reputation. And while the economy teeters on a knife-edge, the administration’s approach to public finances will hardly fill Greeks with optimism for the economic recovery.

A stampede of direct awards (including when state contracts are broken down into smaller ones to avoid open procurement procedures), and the transfer of the management of Covid-19 financial support measures to private companies have raised serious questions about the government’s intentions.

In April the PM had to step in and cancel a €190m financial package earmarked for companies to administer an e-learning programme for the self-employed, after investigations revealed that many of the firms approved by the Ministry of Labour to run the online platforms were, in the words of leader of the opposition, Alexis Tsipras, “directly connected” to the governing party. In what came to be called “voucher-gate”, seven firms were set to pocket €36m. Following the cancellation of the vouchers programme, the Ministry of Labour itself administered the money and paid benefits directly.

A few weeks earlier, a €20m Covid-19 public awareness campaign was directly awarded to a private company. The criteria for determining which media outlets were chosen to carry the campaign material and what they would be paid have not been spelt out. Implementation of the programme by a private company means the government has no obligation to upload information on the allocation of funds to the public transparency registry. Despite parliamentary requests, the government has refused to disclose the financial details of the programme.

Central to the mounting criticism has been the Ministry of Migration and Asylum, which in recent weeks has been hammered by the opposition and media for its disregard for public procurement rules. Citing both national security and the Covid-19 emergency, the ministry has gone on a spree of directly awarding contracts worth millions of euros while claiming these deals are “confidential”. Last month the government passed a law allowing it to install what EU parliamentarians have described as a “secret fund” in the migration ministry for national security reasons. It has been reported that relevant documents from the ministry will be destroyed at least every six months.

So far Greece’s lack of transparency over its public finances has passed unnoticed outside its borders. But with the European Commission’s proposal for a Covid-19 recovery fund that could send close to €32bn into the country, this won’t remain so.

The day the recovery proposal was announced, and while Mitsotakis’ administration was rejoicing, an international organisation’s confidential document about the migration ministry’s handling of public finances was revealed. The document made serious allegations regarding mismanagement of funds, overpricing of contracts and lack of planning.

The lockdown has come at a severe price, especially for the tourism and aviation industries. Tourism contributes about one quarter of the country’s GDP. Last month the European Commission estimated the coronavirus crisis would cause the economy to contract by 9.7% in 2020, the steepest economic decline in the EU. Unemployment could reach almost 20%, just a few years after a peak of almost 30% during the eurozone crisis.

The impression that the administration is mishandling public accounts while asking millions of entrepreneurs and workers to bleed for the benefit of all is not sustainable. The government needs moral authority to enforce costly decisions. And although these scandals have not shaken the public yet, as the recession bites they will take on a new relevance.

There is no lack of challenges on the road ahead for Greece, be they coronavirus-related, economic or even geopolitical. The Greek kleptocracy has, in the 2015 words of the former German vice-chancellor, “plundered the country for years” while the EU “stood by and watched them do it”. Five years on, it looks as if little has changed.

The PM has stated that the €32bn recovery funds will be managed centrally and under his watch. He should start by bringing his administration into line on the management of the public finances before a crisis of confidence becomes an even bigger threat than the pandemic itself.