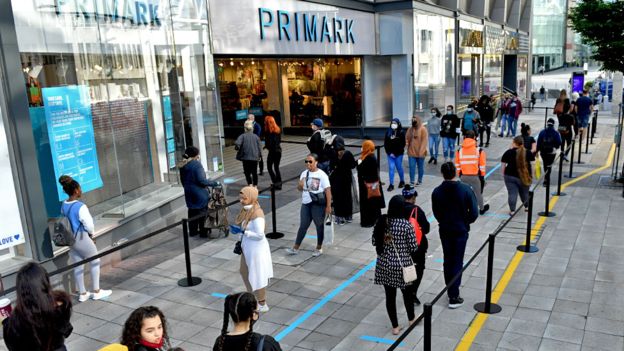 Pent-up demand sees people line up outside stores such as Primark, Zara and Sports Direct.

Long queues as shops reopen in England after lockdown…

London, June 15 (IANS) Long queues were reported outside shops in England on Monday as COVID-19 rules were relaxed after a three month lockdown.

All shops in England were now allowed to open, although retailers have had to introduce strict safety measures, the BBC reported.

Queues were seen outside Primark shops in London and Birmingham ahead of their 8 a.m. opening time.

The fashion retailer chain, which like other clothing shops has been closed since March 23, does not offer online shopping meaning customers can only buy in the store.

In Manchester, people waited for almost an hour for some shops. Big queues formed outside Primark, TK Maxx and Foot Locker.

Retailers are required to introduce plastic screens at the tills and floor markings to keep shoppers two metres apart – -measures that are already a regular fixture in supermarkets.

Other measures will include pleas not to touch items unless customers intend to purchase them and decontaminating shopping baskets after each use.

Retailers are promising there will be plenty of sanitiser on hand for customers.

Toilets will remain closed in Primark”s shops but facilities in other stores, including John Lewis and Selfridges, will be open, said the BBC report.

Although food shops, pharmacies, banks and other essential retailers have stayed open, vast swathes of the High Street, from bookshops to clothes outlets, have been closed since March 23.

Some other retailers selling products classed as essential – such as DIY, furniture and bicycles – have also been reopening.

Many stores are encouraging customers to make purchases by contact-less card payments.

London”s West End, which includes Oxford Street, is expecting about 80 per cent fewer visitors when it reopens on Monday.

In Northern Ireland, non-essential shops reopened on June 5, but there is still no date for Wales and Scotland.

In England, pubs, restaurants, hairdressers, hotels and cinemas will not be allowed to open their doors until July 4 at the earliest – and even then, only if they can meet social distancing measures.