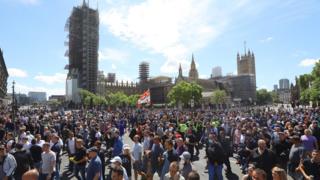 Groups including right-wing activists have gathered around the Cenotaph and Churchill statue in London.

Thousands of protesters have gathered in central London, despite police warnings to avoid demonstrations.

Police were pelted with bottles during confrontations in Parliament Square, where groups said they were protecting statues from anti-racism activists.

Some Black Lives Matter demonstrations have also taken place around the country, including in central London.

Organisers had urged people not to join any anti-racism rallies planned for the weekend over fears there could be clashes with far-right groups. One demonstration planned for Saturday in London was brought forward by a day.

However, other demonstrators gathered around the Cenotaph war memorial in Whitehall and the boarded-up statue of Winston Churchill in Parliament Square on Saturday.

Various groups from around the country, including right-wing activists, said they had come to London to protect symbols of British history.

Among the demonstrators was Paul Golding, leader of the far-right group Britain First, who said they had turned out to “guard our monuments”.

The statue of Churchill was boxed up to protect it from potential damage, after protesters daubed “was a racist” on it last weekend.

Protesters sang the national anthem and chanted “England”, amid a tense atmosphere and heavy police presence.

One large group moved to barricades outside Downing Street and a number of objects were thrown towards police.

Sharing footage of the clashes on Twitter, Home Secretary Priti Patel described it as “unacceptable thuggery”.

“Any perpetrators of violence or vandalism should expect to face the full force of the law,” she wrote.

“Violence towards our police officers will not be tolerated.”

She added that coronavirus “remains a threat to us all”, urging people to go home.

The Met Police said it had put a Section 60 order in place until 02:00 BST on Sunday, giving officers enhanced powers to stop and search individuals.

The measures also include requiring the events to end at 17:00 BST on Saturday.

The Met said the move came after it learned some people were coming into London to cause harm and were likely to bring weapons with them.

At the scene in Parliament Square

Shortly after 13:00 BST a black woman, wearing a mask, was spoken to by police as she was entering Parliament Square from near the Supreme Court.

The officers and the woman were quickly surrounded by a jeering crowd. When officers asked the woman to get down from a plinth, one of the protesters appeared to try to slap the woman.

Part of the crowd surged as additional police officers in riot gear were brought into the scene with horses to strengthen their lines.

The crowd then threw bottles and cans at the officers and let off a number of smoke bombs. One officer appeared to be pushed to the ground as he was taking the woman away.

The new conditions, set out on the Met’s website, apply to Black Lives Matter, and to left and right-wing groups that had notified the force of their intention to demonstrate on Saturday.

Restrictions mean Black Lives Matter demonstrators must stick to a specific route between Hyde Park and Trafalgar Square, where they will be permitted to assemble until 17:00.

Similar regulations applied to right-wing groups require them to assemble in Parliament Square and some parts of Whitehall, again until 17:00.

Hundreds of people also gathered in Glasgow, Bristol and Belfast as part of events organised to “protect” war memorials.

Denise Richards, who is involved in the Black Lives Matter movement in Derbyshire, said her chapter had decided not to protest in London on Saturday, and she believed other groups across the UK felt similarly.

She told BBC Radio 4’s Today programme that peaceful protesters feared they would be caught up in violent clashes with far-right demonstrators and this could “tarnish” the work of Black Lives Matter.

However, she said smaller protests would still be taking place across the UK. Newcastle and Brighton were among the places where demonstrations have taken place.

Nick Lowles, chief executive of campaign group Hope Not Hate, said there was a “very serious” threat of trouble from far-right activists and commended Black Lives Matter for standing down their plans to protest in London on Saturday.

“There are some people who are genuinely concerned about the protection of their statues and monuments but many people are coming for a fight and they are talking openly about it on their social media accounts,” he told the programme.

A Black Lives Matter demonstration took place in central London on Friday evening with leaders of the march urging those in attendance to keep the demonstration “peaceful” and not to join any anti-racism rallies planned for the weekend.

Mayor of London Sadiq Khan urged people to stay away from central London on Saturday, saying there was a risk of violence and disorder from extreme far-right groups planning to travel to the capital.

The police restrictions come in the wake of violence and serious disorder in Westminster at the end of protests last weekend.

While police said those demonstrations were on the whole peaceful, there were dozens of arrests and 27 police officers were injured.

Demonstrations have been taking place across the world following the death in police custody of African American George Floyd in Minneapolis last month.