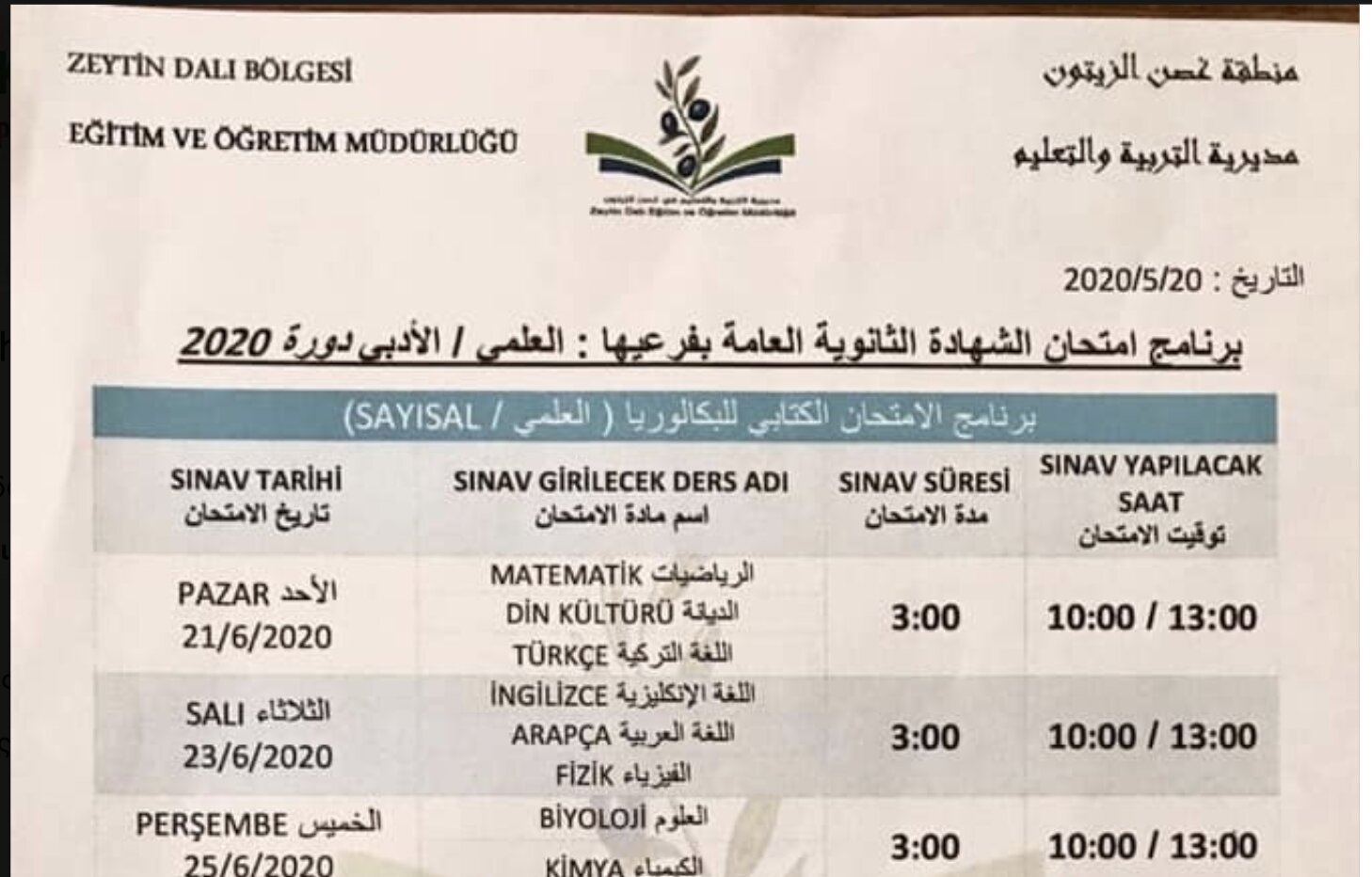 –Stand with the Kurds 2

After six years of studying their mother tongue, which they have been deprived of in Syria for decades, the children of Afrin return to the starting point again, and now they have to study the language of the country that occupies their land, seized their property, looted, robbed, and migrated its people.

The secondary exams program organized by the “local council in the city of Afrin” – an administrative structure established in 2018 after Turkey’s control of the city and includes members loyal to Turkey – obliged students to submit Turkish language exams, while the Kurds were absent from studying and exams.

In general, the Turkish footprint is clearly visible in the service sectors in the northern countryside of Aleppo Governorate, and its repercussions have emerged in educational aspects in a large and private way, despite the existence of an spontaneous response through which the north of Syria seeks to preserve the original cultural character of the region.

Turkey has full control over the educational process in its areas of direct influence in the Syrian north, although the curricula prevalent in schools there are the same as those of the “interim government” that have been modified from the curricula of the Ministry of Education of the Syrian regime and materials have been added to the Turkish language.

As those curricula involved changes in some of the contents and political references, most notably in the subjects of history and geography, because they contain “fallacies” from the point of view of Turkey, as, for example, any words referring to “Ottoman occupation” were removed and replaced with an “Ottoman” rule, Also, Turkish language courses were opened inside schools, and educational staff and students are required to attend.

Turkey is trying to implement its educational system in these areas, which was confirmed by Alireza Alton El, director of the “lifelong learning” program in the Turkish Ministry of Education, in an interview with the newspaper “Asharq Al-Awsat” last September, as he said that “the ministry is working to transfer an experience Education in Turkey, especially the e-learning system to the Euphrates Shield regions within a short period.

These regions include about 500 schools, in which about 150,000 students study, according to the statements of the Turkish Ministry of Education.

In turn, the educational offices of the Free Aleppo Governorate Council issued a decision last year to include the Turkish language in the school curricula from the elementary stage to the secondary stage.

In addition, many schools are named after the Turkish names, in relation to those killed in some battles during the “Euphrates Shield” operation, as well as bringing together the flags of the revolution and Turkey on the covers of the school “evacuations”.