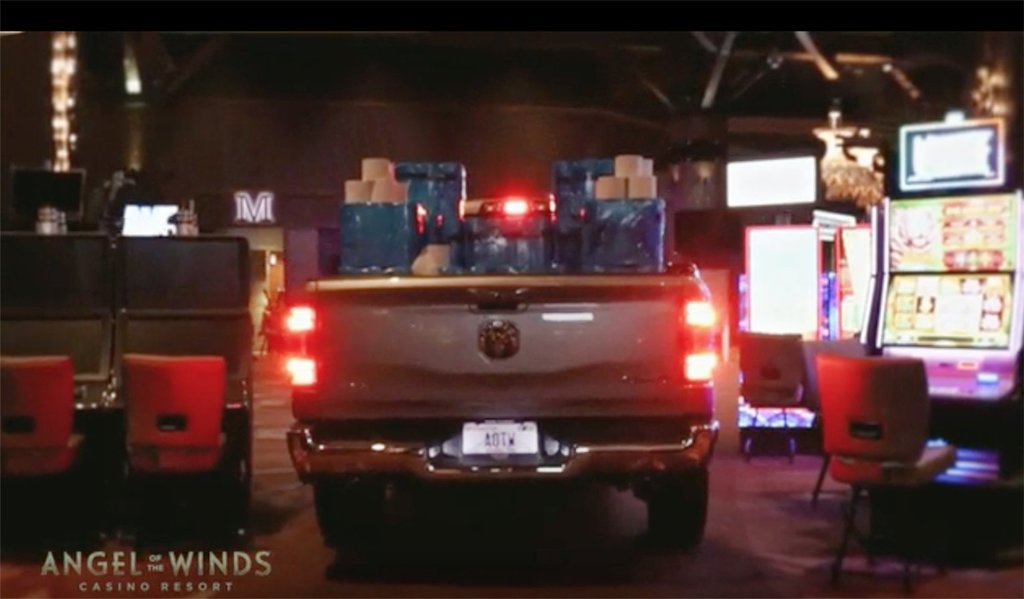 The Stillaguamish Tribe is reopening its casino next week. To enforce social distancing the tribe has reconfigured the gaming floor with aisles demonstrated in a commercial big enough to drive a truck through. Patrons will have to have to wear a mask and get their temperature taken to enter the property, which also is going all smoke free for the first time. (Courtesy of the Stillaguamish Tribe)

To resuscitate tribal government budgets, some tribes around the region have opened their casinos and more will soon follow, including the Stillaguamish tribe’s Angel of the Winds Casino Resort in Arlington, the first casino west of the mountains scheduled to open, on May 13.

In Washington, 22 tribes operate 29 casinos on reservation lands, where they retain decision-making authority — despite Gov. Jay Inslee’s stay-home order, in place until the end of May.

The Coeur d’Alene Tribe was the first to open its facility in Worley, Idaho, on April 27, and the Kalispel tribe opened its facilities on May 5 north of Cusick, Pend Oreille County, and Airway Heights, just outside Spokane.

For other tribes, opening is going to be a while. The Puyallup tribe, for instance, still has no announced date for reopening, and is evaluating the situation day by day.

“It is going to happen very carefully, with the same thought and consideration for the overall health and welfare of our community, which includes our employees and customers and neighbors from all directions, when we closed,” said David Bean, chairman of the Puyallup tribal council. “We closed with that mindset, we want to decrease the infection rate. And that is the same process we put into reopening.”

The council is closely monitoring health data and following the guidance of the tribe’s medical director to make its decision, Bean said. “We are putting people over profits.” He likens the effort to pulling together in a canoe on a long journey.

“It’s just around the corner, that is what we tell our pullers to keep them going,” Bean said. “We are almost there, let’s just get this done, get the crew safely to the next destination.”

At properties that have opened, customers will see a range of changes due to the novel coronavirus, including turned-off  machines to enforce social distancing, plexiglass shields and wider aisles, in addition to deep cleaning.

The Stillaguamish tribe will require a temperature check of every patron before entering the casino, and all staff and patrons must wear masks, said Travis O’Neil, general manager for the tribe’s casino. The tribe also is instituting an all-smoke-free policy, the first in the state in a tribal casino, as a way to create and maintain a more healthy environment.

“Looking at this virus and how it affects the respiratory system, we want our team members and guests to be in a smoke-free environment,” O’Neil said. “The tribe wanted to make that bold statement.  We all know secondhand smoke is not good for people.”

There also will be hand sanitizers throughout the facility and staff will not allow people to congregate on the gaming floor.  No more than 800 customers will be allowed in the building at a time, less than half the capacity. A virtual line will be maintained in the parking lot, where customers can wait in their cars to have their temperature taken and show they have a mask and ID before entry.

The tribe expects the facility will be busy — but they don’t want it too busy, O’Neil said. This is just a first phase of reopening and more seats and capacity will be added, depending on how it goes. The tribe also stands ready to shut down once again, if need be, O’Neil said.

Only two of four restaurants will be open, and only 25% of the seating will be used.

To advertise steps they are taking to accommodate social distancing, the Stillaguamish tribe posted a video on Facebook that shows a truck driving down the aisles of the newly reconfigured gaming floor to show “aisles big enough to drive a truck through,” O’Neil said.

At Stillaguamish, the reason for opening is simple, said Tribal Chairman Shawn Yanity: The tribe has bills to pay, loan payments to make and more than 850 laid-off employees eager to get back to work. The casino also has important impact in the local community: the tribe will donate $200,000 in casino proceeds to local food banks this week. Tribes are required to give away a portion of casino proceeds under their state compacts.

Those proceeds are a crucial source of funds for tribal governments. Donations of casino proceeds as well as jobs at tribal businesses are vital to communities all over the state.

Tribes across Washington together are one of the state’s top 10 employers, putting more than 30,715 people to work. More than  King County government, Costco Wholesale, Starbucks, Safeway & Albertson’s, Walmart or Fred Meyer. Casinos employ many of those people, and most of those employees are non-Indian.

Inslee acknowledges tribes’ authority to do as they wish on their lands, but he would prefer people resist going out just yet, said his spokesman, Mike Faulk.

“He has said all along people should stay home,” Faulk wrote in an email to The Seattle Times. “but he also does not have jurisdiction over sovereign tribes and wants to be respectful of those relationships. But yes, the governor would rather people not be going to venues such as casinos right now.”

The decision by some tribes to reopen their casinos comes as the U.S. Treasury announces the beginning of distribution of $4.8 billion in COVID-19 relief funds to tribal governments across the country, beginning May 5. The money had been hung up in part because of a lawsuit brought in U.S. District Court in Washington, D.C., by tribes, including the Tulalip Tribes and Confederated Tribes of the Chehalis Reservation, to block distribution of the funds to for-profit Alaska Native Corporations.

The tribes were successful in their case after a federal judge found the for-profit corporations do not meet the definition of a tribal government, making them ineligible for the funds.

“We are pleased that Treasury will begin to release relief funds to tribal governments,” said Teri Gobin, chairwoman of the Tulalip Tribes board of directors in a press release May 5. “Federally recognized Indian tribes from every corner of the United States have been in critical need of the CARES Act funds,” she said adding that every day that goes by without assistance jeopardizes the health and economies of tribal communities.

Neither the Tulalip or Chehalis have yet opened their casino properties.