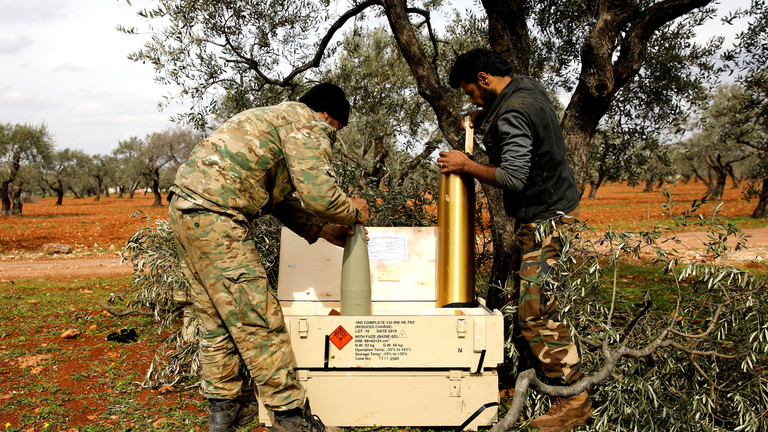 RT: Terrorists tried to use chemical weapons in Idlib against Syrian army, got BURNED after substance leaked – Russian MоD

Jihadist militants have attempted to carry out a chemical weapons attack in a bid to foil a Syrian army attack, but lack of experience dealing with hazardous substances turned against them, Russia’s Defense Ministry said.
Over a dozen terrorists tried to use their weapon of last resort in the strategic town of Saraqeb, which sits on an important highway juncture in Syria’s Idlib province, according to the Russian Reconciliation Center for Syria.
In an effort to “frustrate the advance of Syrian government forces” in the western quarters of Saraqeb, they tried to detonate “high-explosive ammunition along with tanks filled with toxic chemicals,” the statement revealed. Their attack, however, was to no avail.
As the terrorists weren’t proficient enough in handling toxic substances, one of the tanks leaked, inflicting casualties among the attackers themselves who received “severe chemical poisoning, having failed to blow up the charges.”
Syrian government forces have recently stepped up their fight for Saraqeb, which overlooks the vital M5 highway connecting Damascus to Aleppo, and the M4 which spans between Aleppo and the coastal city of Latakia.
Their advance in the city is only part of a wider offensive intended to defeat anti-government militias and members of Hayat Tahrir ash-Sham (HTS) – an offshoot of Al-Qaeda – from the rest of Idlib province. The gains they made led to increasing hostility between Damascus and Ankara, which backs the anti-government militias holed up there.
A series of skirmishes between Turkish and Syrian forces saw numerous casualties on both sides in recent weeks, with the former declaring all Syrian Army units as legitimate targets. Turkey’s military has been extensively using armed drones to hit the Syrian armored vehicles, fortified positions and even individual targets. But so far, it stopped short of using their own ground troops to engage the Damascus’ military.

As the animosity mounts, Turkish President Recep Tayyip Erdogan is heading to Moscow for one-to-one talks with Vladimir Putin. Hopes are being set high for cooling down the conflict, with Erdogan saying another ceasefire deal could be reached as a result of the negotiations.