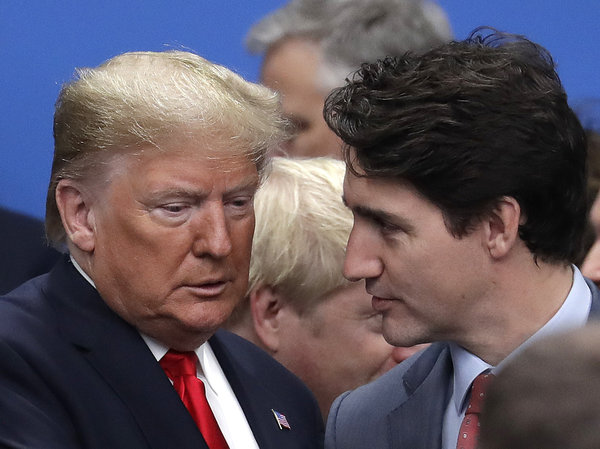 President Trump has responded to a video that appeared to show Justin Trudeau and other world leaders mocking him, calling the Canadian prime minister “two-faced.”

Trump’s remarks follow the president’s Tuesday meeting with the Canadian leader in which the two men appeared to get along, though Trump needled Trudeau over Canada’s defense spending.

“Where are you at? What is your number?” Trump asked Trudeau during their meeting on the sidelines of the NATO summit outside London. Trudeau responded that Canada had, in fact, increased its spending on defense over the past few years. That did not appear to placate Trump, who pressed on: “Where are you now in terms of your number?”

Canada, a NATO member, spends about 1.4% of its gross domestic product on defense. Trump and past U.S. presidents have urged the alliance’s members to spend 2% or more on defense. At present, seven of NATO’s 29 members have reached that target. The U.S. is by far the largest contributor to the alliance, which was set up during the Cold War to protect Western Europe from Russian and Eastern bloc aggression.

Recent relations between Trump and Trudeau have been cordial, mostly because of the United States-Mexico-Canada Agreement, the replacement for NAFTA championed by Trump. Still, they have a complicated history. Although Trudeau was one of the first world leaders to congratulate Trump on his election victory in 2016, the two men quickly found themselves on opposite sides of almost every major global issue, including tariffs, climate change and trade.

The tensions became apparent last year as Canada hosted the G-7 summit. After the meeting, Trudeau announced that Canada, whose economy is highly dependent on the U.S., would press ahead with retaliatory tariffs against the United States. In response, Trump, who had initially slapped tariffs on Canadian aluminum and steel, tweeted that Trudeau was “dishonest and weak” and “mild and meek.”

The release of the video late Tuesday is unlikely to help matters. Trudeau was captured on video talking to French President Emmanuel Macron, Dutch Prime Minister Mark Rutte and British Prime Minister Boris Johnson. They appeared to be discussing Trump, though he is never mentioned by name. The leaders seem unaware they are being recorded.

“He was late because he takes a 40-minute press conference at the top,” Trudeau said in a video posted to Twitter by the CBC. Trudeau is later heard saying: “You just watch his team’s jaws drop to the floor.”

At a news conference Wednesday, Trudeau played down the controversy. He said his reference to jaws dropping was related to Trump’s unexpected announcement that next year’s G7 meeting would be held at Camp David, Md.

“Last night I made a reference to the fact that there was an unscheduled press conference before my meeting with President Trump and I was happy to take part of it but it was certainly notable, and I’ve had a number of good conversations with the president over the course of this day and yesterday,” he said of his remarks in the video.

Macron is also speaking in the video, but his words cannot be heard.

Trump’s meeting with Macron on the sidelines of the NATO summit was also testy. As the president left for the summit, his administration had proposed tariffs of up to 100% on French imports, including wine and cheese.