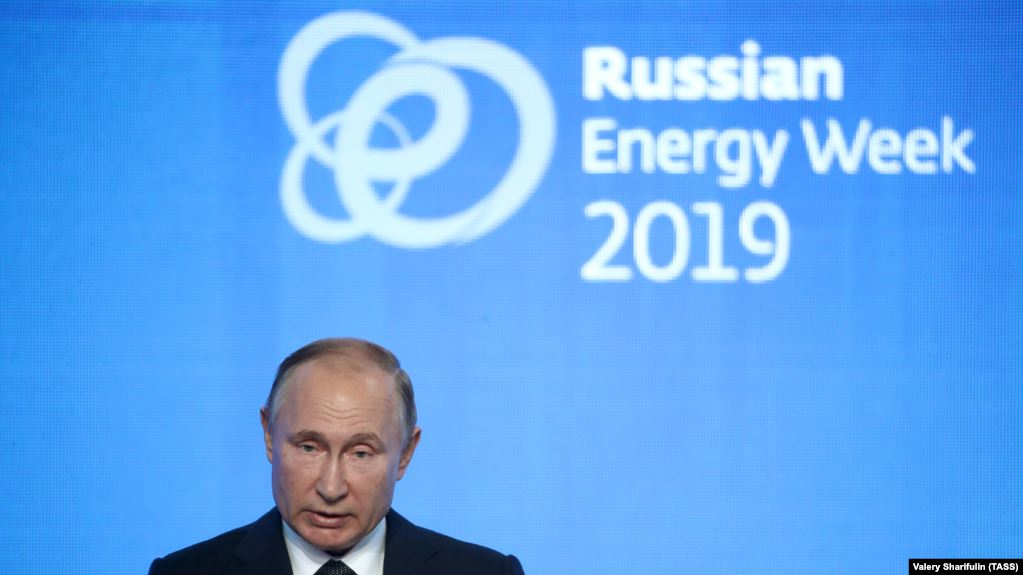 By Jim W. Dean, Managing Editor
November 18, 2019
…from Russia Today, Moscow
–
[ Editor’s Note: Ukraine and Russia are in a showdown as the sand runs down the hour glass on the gas transit contract that expires on December 31rst. The EU is trying to act as an intermediary.
–
Ukraine’s current position is a deal killer, that it must have a ten year contract, and insists on collecting a $2.6 billion judgement on Russia cutting of gas transit after the coup. I was astounded that the Ukies thought they could maintain a full offense on Russia, with ongoing charges and expect to get a ten year contract signed.
–
I doubt Russia will do so as it would have no leverage to get Ukraine to settle some of its disputes. And Russia has multiple reasons for not wanting to be in a long term contract, to protect itself from future mischief.
–
Zelensky has already putting a plan together to “take Crimea back”, which if such an attempt were made I suspect Russia would cut off shipping gas through Ukraine in a jiffy. Why would it throw away the most important lever it has to reign in the Ukrainians from looting the country and they trying to blame it all on Russia, which is their usual game.
–
As a show of good faith the Russian have released the Ukrainian ships they seized when it launched its provocation by trying to crash the Kerch Straits which did not turn out so well, a hair-brained scheme that some idiot dreamed up in Kiev.
–
And then we have the legal issue, in my mind anyway, that when a government is take over in a violent coup, with the help of foreign helpers, which parts of the country refuse to submit to, why would that not breach any contracts that it had with Russia.
–
Ukraine sure as hell never paid Russia back a dime on the prepaid rent, ten years in advance, for its naval base rental as Sevastopol. Ukraine said, “tough doo doo”, but then screamed bloody murder when Russia stopped the gas flow when Ukraine refused to pay its arrears, and nor would its EU, US, NATO supporters of the coup.
–
Who the deal wreckers are in this dispute is beyond question, with the US the most shameful with the growing list of countries it has destroyed for whatever reason it chose to do so. I would suggest that has hurt the US reputation a great deal…Jim W. Dean ]
– First published … November 18, 2019 –
–
Russian energy major Gazprom wants to extend the existing agreement, which expires next year, or sign a new deal for one year on gas transit through Ukraine with the country’s national oil and gas firm Naftogaz.
–

After considering the forecast for European consumers’ gas demand for 2020, Gazprom sent its official proposal to Naftogaz, the Russian company told media on Monday.

However, Gazprom stressed that legal issues must be settled with Ukraine before extending or signing a deal. One of the necessary conditions of the agreement is mutual withdrawal of all claims filed with the international arbitrage, as well as ceasing all court proceedings.

Gazprom also demands the Anti-Monopoly Committee of Ukraine push back its decision to slap the Russian company with a fine over alleged economic competition breach and wants Naftogaz to call off its request for the European Commission to launch a probe against it.

Gazprom is also waiting for a response from Naftogaz on direct gas purchases from Russia. In 2015, Kiev announced that it has halted the purchases of Russian natural gas, and since then has been importing reverse supplies from European nations at a higher price.

Moscow has recently offered Kiev up to 25 percent discount on its direct gas supplies, but Naftogaz insists that this concession would not compensate the sum Gazprom had been ordered to pay by the Stockholm arbitration court.

In 2018, the court ruled that the Russian company must pay Naftogaz a $2.6 billion compensation for a shortfall in the delivery of gas to Ukraine, a decision appealed by Gazprom.

The existing gas contract between Moscow and Kiev expires at the end of the year. With the assistance of the EU, the two sides are in talks over the terms of the deal, but multiple trilateral discussions have proven to be futile so far.  Ukraine insists that the agreement must signed for at least ten years, while Moscow offers only a one-year deal.