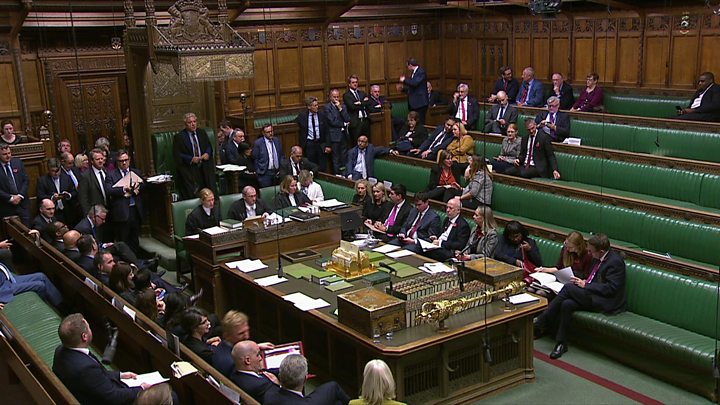 MPs back a second reading of the PM’s bill without a vote, but debate on it continues.

MPs are set to give their blessing to Boris Johnson’s plan for an early general election on 12 December.

Legislation paving the way for the poll has already cleared its first hurdle and the final vote is due shortly.

MPs have rejected an attempt by Labour to change the date to 9 December by a margin of 315 votes to 295.

Efforts by opposition MPs to lower the voting age to 16 and allow EU nationals to take part have failed.

Proposed changes to the PM’s early election bill to extend voting rights were not selected for debate by the Deputy Speaker despite enjoying cross-party support.

It removes one major potential obstacle to a pre-Christmas poll as No 10 had said it would abandon the legislation needed for it if the franchise was altered at such a late stage.

One change that is being considered is a call by Labour – backed by the other opposition parties – to hold the poll three days earlier on 9 December.

This, they argue, would ensure that university students are more likely to be able to take part because it would still be in term time.

But the government has been digging in over the 12 December date – saying only this will guarantee enough time for Parliament to pass crucial legislation relating to Northern Ireland before it is dissolved next week.

MPs are expected to vote on the issue of the date shortly before being asked to give their final approval to the legislation at about 20:00 GMT.