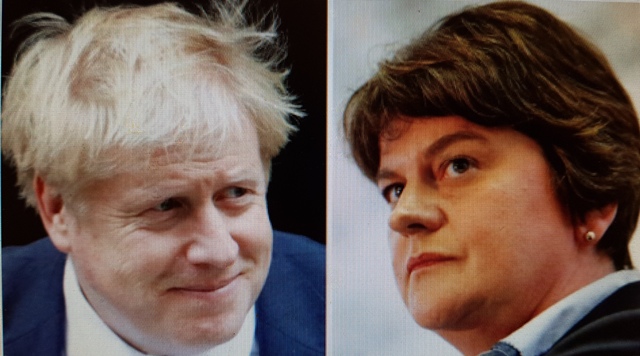 Issues between the UK, EU and Ireland are said to be “pretty much sorted”, but No 10 is still seeking the DUP’s backing…

The future of Boris Johnson’s Brexit deal hangs in the balance as EU officials say the outcome of talks should be known by the end of the day.

The EU’s Donald Tusk said he would have “bet” on a deal 24 hours ago, but “doubts” had appeared on the UK side.

The PM is trying to get Tory Brexiteers and Democratic Unionists on board for his revised plan for Northern Ireland.

Likening talks to climbing Everest, Mr Johnson said the summit was “not far” but still surrounded by “cloud”.

He is in a race against time to get a deal before Thursday’s crucial EU council meeting.

The BBC’s political editor Laura Kuenssberg said she understood the issues between the UK, EU and Ireland were “pretty much sorted”, but it was still not clear whether the Northern Irish DUP were ready to sign up or not.

Mr Johnson has been updating his cabinet on the state of the negotiations after further talks with the DUP, whose support could be vital if Parliament is to approve any agreement.

The PM also briefly addressed a meeting of Conservative MPs, comparing the current position to Edmund Hillary’s ascent of Mount Everest in 1953.

The EU’s chief negotiator, Michel Barnier, has just begun to brief EU ambassadors on the status of the talks – the meeting was originally due to take place at lunch time but was put back twice.

The issue of the Irish border – and how to handle the flow of goods and people across it once it becomes the border between the UK and the EU after Brexit – has long been a sticking point in the negotiations.

The border is also a matter of great political, security and diplomatic sensitivity in Ireland.

The backstop – the solution to border issues agreed by Theresa May – proved unpalatable to many MPs so Mr Johnson has come up with new proposals to dispense with it.

However, they would see Northern Ireland treated differently from the rest of the UK – something the DUP, among others, has great concerns about.

The BBC’s Brussels reporter, Adam Fleming, said that during the course of Wednesday there had been a shift in emphasis in the talks away from issues around customs towards matters surrounding the so-called consent mechanism – the idea the prime minister came up with to give communities in Northern Ireland a regular say over whatever comes into effect.

The DUP is understood to be most concerned about this issue too. The party also fears the creation of a “customs border” in the Irish Sea, which would require checks on goods between the rest of the UK and Northern Ireland.

The DUP held their latest round of talks in Downing Street on Wednesday morning. After a 90-minute meeting on Tuesday, they said “it would be fair to indicate gaps remain and further work is required”.

Party leader Arlene Foster dismissed suggestions that their concerns had since been allayed.

‘EU sources’ are talking nonsense. Discussions continue. Needs to be a sensible deal which unionists and nationalists can support. https://t.co/CpugVBfyBZ

The UK is due to leave the EU at 23:00 GMT on 31 October and Mr Johnson has repeatedly insisted this will happen, regardless of whether there is a deal or not.

One senior EU diplomat has told journalists in Brussels it is now too late for EU leaders to formally approve a revised Brexit deal at the summit.

They said the most they could do was give a provisional thumbs-up – “a political yes” – to whatever emerges from the talks pending the release of the final legal text.

The view from Westminster

As I understand it, most of the issues between the UK, the EU and Ireland have pretty much been resolved, but it is still not clear whether the DUP are actually on board.

Like other factions in this drama, they have been in and out of Downing Street – recipients of a charm offensive by Boris Johnson’s team.

But unless and until they decide it is worth their while to come on board, then it is just too soon to definitively say this is going to be a moment.

It may well be that later tonight this all snaps into place before European leaders gather in Brussels, and then, maybe, they’ll give this a rubber stamp.

But the DUP are not a group of politicians who are a pushover.

And this is still something that is simply not yet in the bag.

And the picture in Brussels

The expectation on the EU side is that a new Brexit deal text is pretty much ready.

They are now just waiting to hear from the UK side whether it can be signed off.

Even if this text is ready, though, even if it can be signed off by EU leaders, the EU will not yet be breathing a sigh of relief because they have been here before.

Theresa May signed a Brexit deal with the EU and it went on to be rejected multiple times by House of Commons.

The fear is, if a new Brexit text meets the same fate, the government will come back to Brussels asking for more concessions.

Mr Tusk suggested earlier that an agreement was still possible by the end of the day.

“It is still undergoing changes and the basic foundations of this agreement are ready and theoretically we could accept a deal tomorrow.” he told the TVN 24 News Channel.

French President Emmanuel Macron said he wanted to believe “the agreement is being finalised”.

Irish Taoiseach Leo Varadkar also said there was still “a pathway to a possible deal” but “many issues” to resolve.

Thursday’s EU summit is crucial because under legislation passed last month – the Benn Act – Mr Johnson is compelled to ask the EU for a delay to Brexit if he does not get a new deal approved by MPs by Saturday.

Brexit Secretary Stephen Barclay told MPs on Wednesday that Mr Johnson “will comply with the law” regarding the terms of any further extension.

If Mr Johnson gets an agreement with Brussels, he will ask MPs to back it and agree the next steps in an emergency sitting of Parliament on Saturday.

No 10 has confirmed the government will table a motion in the Commons on Thursday which, if approved by MPs, would pave the way for the first weekend session since 1982.

However, MPs may not be asked to sanction the extra sitting if there is not a successful conclusion to the Brexit talks.

Earlier, former Brexit Secretary David Davis said the support of Tory Eurosceptics could not be taken for granted and the view of the DUP would be important.

16:30 – The PM spoke to the 1922 Committee of Tory backbenchers for about eight minutes