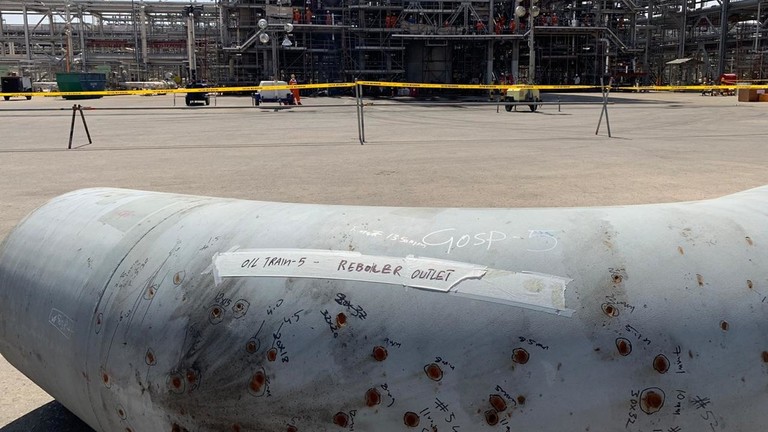 Russia agreed to look into the September aerial attack on the Saudi Aramco oil facilities and will condemn whoever was behind it, but will not take sides in the feud between Riyadh and Tehran, President Vladimir Putin says.

Russia treasures its cordial ties with both Iran and Saudi Arabia, and is equally sensitive to each side’s concerns, Putin told reporters from three Arabic-language broadcasters when asked for his take on the recent strike on Riyadh’s oil processing facilities in Abqaiq.

On the one hand, Moscow maintains “close contacts with the leadership of Saudi Arabia, including the Crown Prince [Mohammad bin Salman],” who asked the Russian leader if his country could help establish crucial facts about the incident.

The attack allegedly involved a swarm of explosive-laden drones and missiles. © RT

“I said yes, we are ready to share anything that might be necessary, everything we have for a thorough investigation,” Putin revealed.

When asked directly whether Russia will go as far as condemning Iran if it’s found responsible, he said there won’t be any exceptions.

Regardless of who stood behind the incident, we condemn any such actions. That is exactly what I said before, and I really meant it.

But assigning blame before finding out the facts is “counterproductive,” the president said, explicitly referring to Riyadh and Washington pointing finger at Tehran.

The attack inflicted heavy damage on the Abqaiq facilities and cut Saudi Arabia’s crude oil extraction almost by half. © RT

And while Russia is ready to assist the Saudi fact-finding effort, such contribution – as well as friendly relations with Saudi Arabia and the United Arab Emirates – will never come at the expense of the long-standing ties with neighboring Iran, “a big country” that “has existed on its territory for thousands of years [and] has its own interests.”

Russia will never be friends with one country against another. We build bilateral relations that rely on positive trends generated by our contacts; we do not build alliances against anyone.

Likewise, Moscow will not take on the “unrewarding” role of a mediator in the Riyadh-Tehran feud, Putin said, adding that the he believes the two nations are capable of solving their disputes without a middleman.

ALSO ON RT.COMIs Saudi Aramco lying about its damaged oil infrastructure?Think your friends would be interested? Share this story!