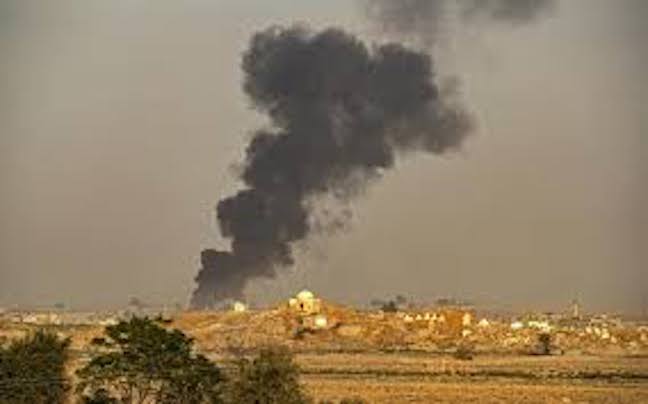 Turkish warplanes have bombed parts of north-eastern Syria at the start of an offensive which could lead to conflict with Kurdish-led allies of the US.

The alliance vowed to resist any Turkish advance across the border.

It asked the US-led coalition against the jihadist group Islamic State (IS) to establish a no-fly zone in the area to stop “attacks on innocent people”.

The Kurds – key US allies in defeating IS in Syria – guard thousands of IS fighters and their relatives in prisons and camps in areas under their control and it is unclear whether they will continue to be safely detained.

Turkish ground forces have been massing on the border. The offensive was launched just days after President Donald Trump controversially withdrew US troops from northern Syria, a decision announced after a phone call with Mr Erdogan that sparked widespread criticism at home and abroad.

What is Turkey’s plan?

On Twitter, Mr Erdogan said the mission “was to prevent the creation of a terror corridor across our southern border, and to bring peace to the area” and that it would “preserve Syria’s territorial integrity and liberate local communities from terrorists.”

The scale of the offensive was not yet clear, and there was no information on whether Turkish ground forces had attempted to enter Syria. Turkey plans to create a “safe zone” cleared of Kurdish militias – regarded by Ankara as terrorists – which will also house two million of Turkey’s 3.6 million Syrian refugees.

Civilians were reported to be leaving the towns of Ras al-Ain and Tal Abyad, which were hit by several strikes. Two civilians had been killed and two others injured in the village of Misharrafa, west of Ras al-Ain, according to the SDF.

BBC’s Orla Guerin in Akcakale on the Turkish-Syrian border

Police vehicles have been telling civilians to leave the area, and there were sounds of artillery fire and mortar rounds. There has been incoming mortar fire from just across the border but it has not reached Turkish territory.

President Erdogan says this is the beginning of Operation Peace Spring. There is no doubt that for the Syrian civilians who are just across the border this is going to be seen as another round of battling in an agonisingly long war.

The Kurdish forces have emphasised almost frantically in the last few days that the hard-won gains in their long battle against IS are now being put at risk. The SDF have lost an estimated 11,000 fighters in battling IS. They succeeded with American help.

But they point out, for example, that they may have to withdraw their forces from prisons where they are holding IS fighters or from cities that have been liberated from IS. The Kurds are basically saying to the West: the war that we fought on your behalf is now at risk because of what Turkey wants to do.

What has the international reaction been?

The UK and France planned to request an emergency meeting of the UN Security Council to discuss the situation, and European Commission President Jean-Claude Juncker urged Turkey to “halt its military operation”.

Nato Secretary General Jens Stoltenberg said Turkey had “legitimate security concerns” but that he expected the country to “act with restraint and to ensure that any action… is proportionate and measured.

US Senator Lindsay Graham, a close ally of Mr Trump, said he would lead an effort in Congress to “make Erdogan pay a heavy price”, adding: “Pray for our Kurdish allies who have been shamelessly abandoned by the Trump Administration.”

Mr Trump had responded to the criticism to his decision by threatening to “obliterate” Turkey’s economy if it went “off limits” in the incursion, saying Turkey should “not do anything outside of what we would think is humane”.

How would an incursion affect the IS situation?

The SDF says it is detaining more than 12,000 suspected IS members in seven prisons, and at least 4,000 of them are foreign nationals. The exact locations have not been not revealed, but some are reportedly close to the Turkish border.

Two camps – Roj and Ain Issa – holding families of suspected IS members are inside the “safe zone”. Mr Trump warned Mr Erdogan if he did send troops into Syria, they would be responsible for securing captured IS fighters.

On Wednesday, IS militants reportedly carried out three suicide attacks in their former de facto capital of Raqqa. There was no confirmation of casualties.

Are you in the affected area? If it is safe to do so contact us by emailing haveyoursay@bbc.co.uk.

Or use the form below: