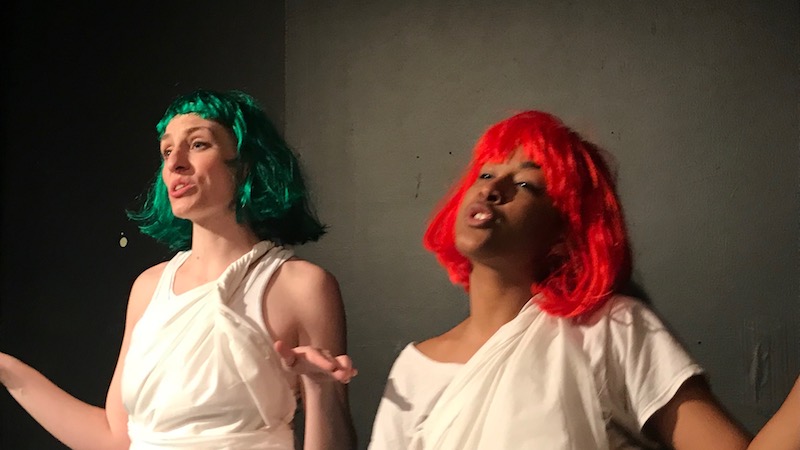 HAMTRAMCK, Mich.–The comedy shows at Planet Ant Theatre here are renown for ranging between inventive and silly. Greece falls into the latter category.

That’s not to say the new musical comedy by Nuverre Naami is bad. It’s a breezy bon-bon of foolishness.

One can imagine that the script was more or less drafted in a day once the writer got the idea: Parody Grease, the well-worn musical, by placing it in Ancient Greece. Get it?

The Gods, led by Zeus, are at Mt. Olympus High, an All-God Academy. Sandy, a mortal, arrives at the school, and is immediately taunted by the mean-girl God-esses. Zeus is the big-God on campus, and, true to the original, has spent time with Sandy on summer vacation during which he posed as…wait for it…Zeusko.

The script can get labored, but is held up by strong performance, especially by Donny Riedel as Zeus and Maggie O’Reilly who gets a lot of wry lines that punctuate the show over the course of the hour. Jennifer Horne, Brendan McCarthy and Asia Marie Hicks round out the other Gods and Stephanie Bainter plays Sandy.

The parallels are amusing, Instead of a souped up jalopy, Zeus gets into a drag race with a souped up chariot, and we hear a parody of “Greased Lightning” (Zeus Lightning) Other strong song parodies are done on “Hopelessly Devoted To You,” “You’re The One That I Want,” Beauty School Dropout,” and a few others.

The show plays through May 11.