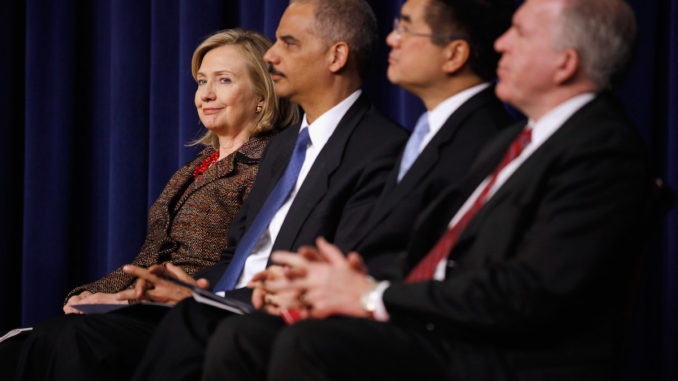 Under the leadership of John Brennan, the CIA operated as an opposition research outfit for the Hillary Clinton campaign, according to reports.

Spectator.org reports: As it became urgently clear to Brennan that Trump was going to face off against Hillary, Brennan turned to “intelligence partners” in Europe for dirt on Trump. But they didn’t have any, save some pretty skimpy material on “contacts” between Trump campaign officials and Russians.

Whatever Brennan collected was so insubstantial that Robert Mueller hasn’t even interviewed him about it. Consider that for a second: Mueller was supposedly appointed to complete the counterintelligence probe into Trumpworld, and he hasn’t felt the need to talk to the father of it. Brennan has tried to explain this astonishing discrepancy away by vaguely saying that whatever Mueller needs he could find in “CIA files.”

Those files are no doubt as elliptical as the formal document starting the probe. It appears that Brennan’s alleged “tips” were too flaky and unofficial for the Obama administration to commit to print. Brennan had his own partisan hunches, fueled by his feverish hatred of Trump and perhaps a few spit-balling conversations with other Trump-hating spy chiefs abroad (the “special relationship” had turned sinister against Trump, as evident from Britain’s sorry role in this mess), but he had no evidence to meet any reasonable threshold for a counterintelligence probe of a presidential campaign, especially one undertaken by an administration supporting that candidate’s opponent. Brennan’s espionage against Trump was as audacious as a paranoid LBJ wiretapping Nixon’s campaign plane in the thick of a race against LBJ’s vice president, Hubert Humphrey.

In his own clumsy way, Brennan knew that he was treading on a political minefield. He referred to the FBI/CIA’s spying on the Trump campaign as an “exceptionally, exceptionally sensitive issue.” That helpful crumb comes from Russian Roulette, the book by David Corn and Michael Isikoff.

Brennan dimly understood that there would be hell to pay if it came out that Hillary partisans in the U.S. government were spying on her opponent’s campaign, making use of opposition research that she had purchased. But Brennan, who was auditioning to be Hillary’s CIA director and choking on his anger at the thought of Trump as president, couldn’t help himself apparently. From April 2016 to July 2016, according to leaked stories in the British press, he assembled a multi-agency taskforce that served as the beginnings of a counterintelligence probe into the Trump campaign. During these months, he was “personally briefing” Obama on “Russian interference” — Brennan’s euphemism for spying on the Trump campaign — and was practically camped out at the White House. So in all likelihood Obama knew about and had given his blessing to Brennan’s dirt-digging.

The FBI’s liaison to Brennan was Peter Strzok, whose hatred for Trump equaled Brennan’s. But even Strzok knew that Brennan was blowing smoke about Trump-Russian collusion. Strzok would later tell his mistress that he sensed the probe would prove a crock — that “there’s no big there there.”

What’s valuable about the Corn/Isikoff account is that it inadvertently provides a picture of Brennan running an anti-Trump spying operation right out of Langley. Even after the FBI probe formally began in July 2016, Brennan was bringing CIA agents, FBI officials, and NSA officials into the same room at CIA headquarters to pool their anti-Trump hunches. To give these outrageous meetings a patina of respectability, Brennan invoked the post-9/11 rationale of interagency cooperation. Corn and Isikoff, obviously supportive of Brennan’s operation, use absurdly sanitized language to describe these meetings, but the shocking political import of them is still unmistakable:

Brennan spoke with FBI Director James Comey and Admiral Mike Rogers, the head of the NSA, and asked them to dispatch to the CIA their experts to form a working group at Langley that would review the intelligence and figure out the full scope and nature of the Russian operation. Brennan was thinking about the lessons of the 9/11 attack. Al Qaeda had been able to pull off that operation partly because US intelligence agencies — several of which had collected bits of intelligence regarding the plotters before the attack — had not shared the material within the intelligence community. Brennan wanted a process in which NSA, FBI, and CIA experts could freely share with each other the information each agency had on the Russian operation — even the most sensitive information that tended not to be disseminated throughout the full intelligence community.

Brennan realized this was what he would later call “an exceptionally, exceptionally sensitive issue.” Here was an active counterintelligence case — already begun by the FBI — aiming at uncovering and stopping Russian covert activity in the middle of a US presidential campaign. And it included digging into whether it involved Americans in contact with Russia.

So until election day, the “working group at Langley” was trying to dig up dirt on the Trump campaign and wasn’t coming up with any. But Brennan didn’t want his efforts to go to waste, so he leaked to Senator Harry Reid the existence of the counterintelligence probe into the Trump campaign. He couldn’t leak any damning findings from that probe because there weren’t any. But he could inflict political damage by getting Reid to tell the press darkly of the probe’s existence. He also got Reid to write a public letter to Comey about the probe, which was designed to deepen the FBI’s reliance on Hillary’s paid dirt-digger, Christopher Steele. Reid, as a reliable Democratic hack in the tank for Hillary, went along with Brennan’s scheme, but he felt manipulated enough by Brennan that he complained to Corn and Isikoff about Brennan’s odd intensity — an “ulterior motive” that Reid sensed in Brennan.

The scope of that ulterior motive encompassed several elements: a hysterical hatred of Trump (now on display in Brennan’s unhinged tweets), a desire to continue as CIA director under Hillary, and a special animus toward Michael Flynn, whose determination to rip up Obama’s “re-set” with the Islamic world, a matter near and dear to Brennan’s heart, sent him into red-faced rages. Brennan, notorious for his Islamophilia, had refused to take his oath as CIA director on the Bible, regarding that practice as the disgusting relic of a once-Christian America. He had played a leading role in Obama’s outreach to the Islamic world and saw Flynn as an odious threat to that work. What Brennan’s “working group at Langley” couldn’t achieve in nailing Flynn was accomplished later by Sally Yates and Comey through entrapment and Mueller’s leveraged prosecution in which he got Flynn to confess to a crime he didn’t commit.

Many questions in all of this remain unanswered, but this much is clear: John Brennan’s transformation of the CIA into a branch office of the Hillary campaign will go down as one of the grossest abuses in the agency’s history.